Tagged As They Slip Away, Beta, Black Helicopters, Changeling, Crumble, Pretty Girl 13, Sever, Steeplechase, The Angel, The Hallowed Ones, The Hollow City

Reading The Angel is catching up with your favourite people. Nora, Søren, Kingsley, and Michael were vivid from the start (The Siren), and we uncover more about each of them here. The characters evolve in different ways, and will probably change again in the next instalment. Nora, who’s kept what she wanted, but still laments what might have been. Søren, who micromanages potential controversy like a pro, bringing faith back to the faithless. Kingsley, who keeps his cards close to his chest, and who may not get the happy ending he wishes. And Michael, who gets everything he wanted, and more.

As much as they all feel familiar, there’s always much more to unveil – especially about Søren. Tiffany Reisz is a master of teasing, revealing, and concealing at exactly the right moments. There’s plenty of suspense and real drama, with the emotion matching the action in its vividness. I’m hesitant to start The Prince, as The Mistress‘s release is still five months away. But I love the world, I love the characters (well, not Wesley), and I love the storytelling. If you’re not already hooked on the Original Sinners, get on board – it’s a ride you won’t forget.

END_OF_DOCUMENT_TOKEN_TO_BE_REPLACED 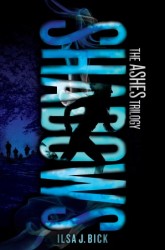 Ilsa J. Bick
Shadows (Ashes, Book 2)
Random House Egmont (US & CA: 25th September 2012)
Buy (US) Buy (UK) Buy (CA) Buy (Worldwide)
The Apocalypse does not end. The Changed will grow in numbers. The Spared may not survive. Even before the EMPs brought down the world, Alex was on the run from the demons of her past and the monster living in her head. After the world was gone, she believed Rule could be a sanctuary for her and those she’d come to love. But she was wrong. Now Alex is in the fight of her life against the adults, who would use her, the survivors, who don’t trust her, and the Changed, who would eat her alive.

Laura Bickle
The Hallowed Ones
Houghton Mifflin Harcourt (US: 25th September 2012)
Buy (US) Buy (UK) Buy (CA) Buy (Worldwide)
Katie is on the verge of her Rumspringa, the time in Amish life when teenagers can get a taste of the real world. But the real world comes to her. Rumours of massive unrest on the “Outside” abound. Something murderous is out there. Amish elders make a rule: No one goes outside, and no outsiders come in. But when Katie finds a gravely injured young man, she can’t leave him to die. She smuggles him into her family’s barn – at what cost to her community?

Kylie Chan
Earth to Hell
HarperCollins (US: 25th September)
Buy (US) Buy (UK) Buy (CA) Buy (Worldwide)
It is eight years since Xuan Wu, God of the Northern Heavens, living in Hong Kong as wealthy businessman John Chen, was exiled from the mortal realm. Emma Donahoe and Simone, John’s daughter, are facing a new series of threats, while their best fighter, Leo, sits in Hell. They must persuade him to come home…but, in Hell, nothing is as it appears. On Earth, Simon Wong, the Demon King’s son, is no longer around to trouble them, but his associates have taken over Simon’s underworld activities. The otherworldly stones are being targeted and are in danger of their kind being completely destroyed. It seems that the Demon King is the only one Emma can turn to for help…

Kim Harrison
A Perfect Blood (Hollows, Book 10)
HarperCollins Voyager (US: 25th September 2012)
Buy (US) Buy (UK) Buy (CA) Buy (Worldwide)
Ritually murdered corpses are appearing across Cincinnati, terrifying amalgams of human and other. Pulled in by the FIB to help investigate, former witch-turned-day-walking demon Rachel Morgan soon realises a horrifying truth: others want to create their own demons, and to do so they need her blood. She’s faced vampires, witches, werewolves, demons, and more – but this time Rachel’s toughest challenge might be humanity itself.

Tiffany Reisz
The Angel (Original Sinners, Book 2)
Harlequin Mira (US: 25th September 2012)
Buy (US) Buy (UK) Buy (CA) Buy (Worldwide)
Infamous erotica author and accomplished dominatrix Nora Sutherlin is doing something utterly out of character: hiding. While her longtime lover, Søren – whose fetishes, if exposed, would be his ruin – is under scrutiny pending a major promotion, Nora’s lying low and away from temptation in the lap of luxury. Her host, the wealthy and uninhibited Griffin Fiske, is thrilled to have Nora stay at his country estate, especially once he meets her travelling companion. Young, inexperienced and angelically beautiful, Michael has become Nora’s protégé, and this summer with Griffin is going to be his training, where the hazing never ends. But while her flesh is willing, Nora’s mind is wandering. To thoughts of Søren, her master, under investigation by a journalist with an axe to grind. And to another man from Nora’s past, whose hold on her is less bruising, but whose secrets are no less painful. It’s a summer that will prove the old adage: love hurts.

Gena Showalter
Alice in Zombieland
Harlequin Teen (US: 25th September 2012)
Buy (US) Buy (UK) Buy (CA) Buy (Worldwide)
Had anyone told Alice Bell that her entire life would change course between one heartbeat and the next, she would have laughed. From blissful to tragic, innocent to ruined? Please. But that’s all it took. One heartbeat. A blink, a breath, a second, and everything she knew and loved were gone. Her father was right. The monsters are real. To avenge her family, Ali must learn to fight the undead. To survive, she must learn to trust the baddest of the bad boys, Cole Holland. But Cole has secrets of his own, and if Ali isn’t careful, those secrets might just prove to be more dangerous than the zombies.

Tagged A Perfect Blood, Alice in Zombieland, Earth to Hell, Shadows, The Angel, The Hallowed Ones