Tagged As They Slip Away, Beta, Black Helicopters, Changeling, Crumble, Pretty Girl 13, Sever, Steeplechase, The Angel, The Hallowed Ones, The Hollow City 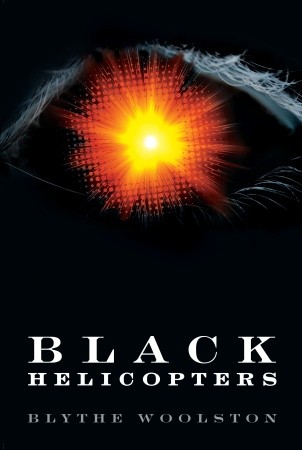 I don’t agree with the US publisher’s decision to put the spoiler on the book jacket. (It’s on the back-flap in the author section.) Though the spoiler was mentioned in the deal announcement, which appealed to me to add it to my wish-list and chase up the author’s backlist… But I think the story would be more effective if the reader went in without that information. More shocking. Mind you, knowing didn’t make me love the novel any less.

Blythe Woolston’s novels are short, sharp, and to the point. They never outstay their welcome: they simply tell the story as the lead character sees it, and leave the reader to interpret the meaning.

Valkyrie White reminds me of Ree, from Daniel Woodrell’s Winter’s Bone: they’re both tough young ladies surviving rural America, and their society, the best they can. Living dangerous lives, their tales of grit and determination stick long after their books are over.

The overt symbolism of chess and clockwork actually doesn’t fall into cliché, while there are vague references to “orders” and “messages”. However, in the rent-paying scene it’s a bit uncertain whether the gun is actually a gun, or a metaphor. It’s more powerful if it’s NOT a metaphor, though.

Blythe Woolston has a knack for knowing when to tease, and when to reveal. The non-linear narrative has handy timeframes at the start of each chapter, and the events are shared in a suitable order.

It’s very difficult to write an unspoiled review, so forgive my lack of detail. There are quite a few things I want to research now, after learning of them in this novel. It would be too obvious to call Black Helicopters “explosive”, so instead I’ll just say that it’s bloody brilliant. At only 166 pages, reading it will only take a few hours of your time, but you’ll be all the better for it.

END_OF_DOCUMENT_TOKEN_TO_BE_REPLACED

Rinda Elliott
Dweller on the Threshold (Beri O’Dell, Book 1)
Samhain (US: 26th March 2013)
Beri O’Dell is working on the side investigating paranormal creatures because she wants to know what she is. She’s taller and stronger than most men, she astral projects with an annoyingly real instead of metaphysical cord, and she can peel through dimensional layers to see the creatures and spirits beyond. She once helped her foster sister, Detective Elsa Remington, track down killers in Jacksonville, Florida, but stopped when a nasty fire elemental turned her strength against her. Now, she finds herself pulled back when something steals Elsa’s soul and puts her into a coma. This thing has put a lot of people into comas and beings called Dweller Demons are coming through the bodies. With little time to spare, Beri battles Dweller Demons while searching for the truth. She has help in her spirit guides Fred and Phro, but others come along for the ride, including a pyro-nervous witch, and an androgynous necromancer. With all this on her hands, the last thing Beri needs is to fall in love with a centuries-old Minoan warrior – one who has something scary wrong with him. But unfortunately, Nikolos knows what creature she’s after because he battled it before on what is now known as Crete. It’s bad. Really, really bad. He calls it the Dweller on the Threshold.

Jill Hathaway
Impostor (Slide, Book 2)
HarperCollins Balzer + Bray (US & CA: 26th March 2013)
Buy (US) [Hardcover] Buy (US) [Kindle] Buy (UK) Buy (CA) Buy (Worldwide)
Vee Bell’s gift (or curse) of “sliding” – slipping into the mind of another person and experiencing life, briefly, through his or her eyes – has been somewhat under control since she unwillingly witnessed the horrific deaths of her classmates six months ago. But just as things are getting back to normal – and her relationship with her best friend, Rollins, is heating up – Vee has a bizarre experience: She loses consciousness and finds herself in a deserted area, at the edge of a cliff, staring down at the lifeless body of the boy who had taken advantage of her last year. As Vee finds herself in stranger and stranger situations with no memory of getting there, she begins to suspect that someone else she knows has the ability to slide. And this “slider” is using Vee to exact revenge.

Sophie Littlefield
Aftertime (Aftertime, Book 1)
Harlequin Luna (US: 26th March 2013)
Buy (US) [Paperback] Buy (US) [Kindle] Buy (UK) Buy (CA) Buy (Worldwide)
Awakening in a bleak landscape as scarred as her body, Cass Dollar vaguely recalls surviving something terrible. Wearing unfamiliar clothes and having no idea how many days – or weeks – have passed, she slowly realises the horrifying truth: Ruthie has vanished. And with her, nearly all of civilisation. Where once-lush hills carried cars and commerce, the roads today see only cannibalistic Beaters – people turned hungry for human flesh by a government experiment gone wrong. In a broken, barren California, Cass will undergo a harrowing quest to get her Ruthie back. Few people trust an outsider, let alone a woman who became a zombie and somehow turned back, but she finds help from an enigmatic outlaw, Smoke. Smoke is her saviour, and her safety. For the Beaters are out there. And the humans grip at survival with their trigger fingers. Especially when they learn that she and Ruthie have become the most feared, and desired, of weapons in a brave new world…

Emily Murdoch
If You Find Me
Macmillan St. Martin’s Griffin (US: 26th March 2013)
Review
Buy (US) Buy (UK) Buy (CA) Buy (Worldwide)
A broken-down camper hidden deep in a national forest is the only home fifteen-year-old Carey can remember. The trees keep guard over her threadbare existence, with the one bright spot being Carey’s younger sister, Jenessa, who depends on Carey for her very survival. All they have is each other, as their mentally ill mother comes and goes with greater frequency. Until that one fateful day their mother disappears for good, and two strangers arrive. Suddenly, the girls are taken from the woods and thrust into a bright and perplexing new world of high school, clothes and boys. Now, Carey must face the truth of why her mother abducted her ten years ago, while haunted by a past that won’t let her go…a dark past that hides many a secret, including the reason Jenessa hasn’t spoken a word in over a year. Carey knows she must keep her sister close, and her secrets even closer, or risk watching her new life come crashing down.

Rachel Vincent
With All My Soul (Soul Screamers, Book 7)
Harlequin Teen (US: 26th March 2013)
Buy (US) Buy (UK) Buy (CA) Buy (Worldwide)
After not really surviving her junior year (does “undead” count as survival?), Kaylee Cavanaugh has vowed to take back her school from the hellions causing all the trouble. She’s going to find a way to turn the incarnations of Avarice, Envy and Vanity against one another in order to protect her friends and finish this war, once and forever. But then she meets Wrath and understands that she’s closer to the edge than she’s ever been. And when one more person close to her is taken, Kaylee realises she can’t save everyone she loves without risking everything she has…

Blythe Woolston
Black Helicopters
Candlewick (US: 26th March 2013)
Buy (US) Buy (UK) Buy (CA) Buy (Worldwide)
Ever since Mabby died while picking beans in their garden – with the pock-a-pock of a helicopter overhead – four-year-old Valley knows what her job is: hide in the underground den with her brother, Bo, while Da is working, because Those People will kill them like coyotes. But now, with Da unexpectedly gone and no home to return to, a teenage Valley (now Valkyrie) and her big brother must bring their message to the outside world – a not-so-smart place where little boys wear their names on their backpacks and young men don’t pat down strangers before offering a lift.

Tagged Aftertime, Black Helicopters, Dweller on the Threshold, If You Find Me, Impostor, With All My Soul

END_OF_DOCUMENT_TOKEN_TO_BE_REPLACED

Tagged A Touch Menacing, Aftertime, Agave Kiss, Black Helicopters, Blood on the Bayou, Bot Wars, Broken, Changeling, Crossed, Death Doom and Detention, Dweller on the Threshold, Ever After, February 2013 Releases, If You Find Me, Impostor, March 2013 Releases, Midnight Blue-Light Special, Mila 2.0, Pretty Girl Thirteen, Rebel Angels, Redemption, The Lost, The Queen is Dead, The Springsweet, The Summer Prince, Twice Tempted, Unremembered, When We Wake, With All My Soul

END_OF_DOCUMENT_TOKEN_TO_BE_REPLACED

Ann Aguirre & Andres Aguirre writing as A. A. Aguirre’s Bronze Gods to Ace (World English) in a 2-book deal. A steampunk fantasy wrapped around a whodunit, where gaslight detectives solve ritual slayings & magic is a shameful secret.

Megan B.‘s Bangable Dudes in History, based on the blog of the same name, to Simon & Schuster (World). A collection of historical hotties (princes, dandies, scientists, composers, assassins & more) & an exploration of what makes them so darn foxy. Complete with photos, little-known historical facts, & charts & graphs.

Kate Karyus Quinn‘s Another Little Piece in a 2-book deal to HarperTeen (NA). A girl comes to on an Oklahoma highway in another girl’s body with the knowledge that she has murdered the girl whose form she now takes. The main character journeys back to the murdered girl’s home in upstate New York as she tries to figure out, among other things, the identities of her other victims.

Amanda Sun‘s debut Ink Wash to Harlequin Teen (World) in a 2-book deal. A 16-year-old orphan is uprooted to Japan & crosses paths with her school’s arrogant kendo star whose drawings come to life in dangerous ways, pushing them both into Japan’s paranormal underworld.

Bethany Wiggins‘s Stung. Government attempts to save endangered bees by genetic modification causes their sting to induce deadly, flu-like symptoms in humans. A vaccine created in response changes children into ferocious, killer beasts. The uninfected have built a wall to keep the beasts out, & a girl has awakened on the wrong side.

Blythe Woolston‘s Black Helicopters to Candlewick (NA) in a 2-book deal for publication in 2013. About a girl raised to be a weapon who straps on a vest of explosives & sets out to kill & be killed until her plan goes wrong.