Jeaniene Frost‘s Realmwalker to Harlequin in a 3-book deal. A young woman discovers she’s the last member of an ancient line with an unwanted destiny, and that her only ally – a mysterious young man – is destined to betray her…and doom the world.

Stacey Jay‘s Juliet Immortal to ABC Family (TV). A paranormal love story revolving around Romeo and Juliet, who meet again – as enemies. Juliet was murdered by her new husband, Romeo, as a sacrifice to ensure his immortality. What he didn’t anticipate, however, is that Juliet would be granted eternity and spend her days fighting her former beloved to preserve romantic love and the lives of the innocent.

Carrie Jones & Steven E. Wedel‘s YA horror novel to Tor Teen (NA) for publication in 2014. Told from alternating perspectives. Chrystal is no stranger to the unexplainable, and when she moves to Oklahoma she must join forces with local teen Logan to protect their small farming town from whatever/whoever has been terrorising it.

Peggy Kern‘s Little Peach (2014) to HarperCollins/Balzer + Bray (NA). The gritty tale of a 14-year-old runaway who flees to New York City to escape her addicted mother, only to find herself lured into prostitution by a manipulative pimp.

R. C. Lewis‘ Stitching Snow to Disney-Hyperion in a 2-book deal, for publication in 2014. A royal teen runaway is scraping together a living in a mining settlement on the far side of the universe, until she is discovered and “rescued” against her will…a rescue operation that just might kill her.

Whitney Miller‘s The Terror to Flux in a 2-book deal. The daughter of a charismatic cult leader leads a sheltered life but has visions of a dizzying, blood-soaked alternate reality that just might be coming true.

Stephanie Oakes‘ Minnow (2014) to Dial Books for Young Readers (World) in a 2-book deal. Loosely based on the Grimm tale The Handless Maiden, a girl must rebuild her life after escaping from a religious commune and being imprisoned in a juvenile detention centre.

Karin Slaughter‘s Will Trent books, starting with Triptych, to Yellowbird. They will work closely with Slaughter, who will write the first script and will also co-executive-produce. The series takes place in Atlanta, Georgia, and features Georgia Bureau of Investigation special agent Will Trent, his partner Faith Mitchell, and their legendary boss Amanda Wagner. Will shoot on location in Atlanta. 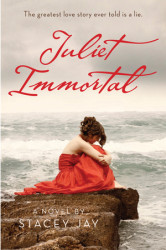 Stacey Jay
Juliet Immortal
Random House Ember (US & CA: 11th September 2012)
Buy (US) Buy (UK) Buy (CA) Buy (Worldwide)
Juliet Capulet didn’t take her own life. She was murdered by the person she trusted most, her new husband, Romeo Montague, a sacrifice made to ensure his own immortality. But what Romeo didn’t anticipate was that Juliet would be granted eternity, as well, and would become an agent for the Ambassadors of Light. For 700 years, she’s fought Romeo for the souls of true lovers, struggling to preserve romantic love and the lives of the innocent. Until the day she meets someone she’s forbidden to love, and Romeo, oh Romeo, will do everything in his power to destroy that love. Sophie Littlefield
Hanging by a Thread
Simon & Schuster Delacorte (US & CA: 11th September 2012)
Review
Buy (US) Buy (UK) Buy (CA) Buy (Worldwide)
Summer is the best part of the year in Winston, California, and the Fourth of July is the highlight of the season. People consider themselves lucky to live in the quaint, serene beachside town, and native Clare Knight, now a city girl, feels doubly lucky to be moving back there a week before the July festivities kick off. But the perfect town Clare remembers has changed, and everyone is praying that this summer will be different from the last two – that this year’s Fourth of July festival won’t see one of their own vanish without a trace, leaving no leads and no suspects. The media are in a frenzy predicting a third disappearance, but the town depends on tourist dollars, so the residents of Winston are trying desperately to pretend nothing’s wrong. And they’re not the only ones hiding something. Clare has been blessed – or perhaps cursed – with a gift: she can see people’s pasts when she touches their clothes. And since she’s a seamstress who redesigns vintage clothing, her visions are frequent – and usually unwanted. When she stumbles across a denim jacket that once belonged to Amanda Stavros, last year’s Fourth of July victim, Clare sees her perfect town begin to come apart at the seams.