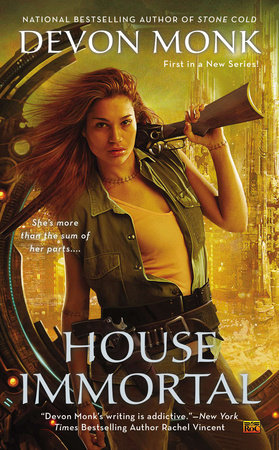 With a section on her website dedicated to her knitting, it was inevitable that Devon Monk would write a series where craftwork is integral.

In 1910, an experiment killed most people in the region. Thirteen people survived – they are “galvanized”, seemingly immortal. They fell into comas, awakening later.

Matilda Case has been stitched together with “life thread”, and her grandmother is mostly seen knitting a lengthy scarf from “pocket sheep’s” wool with nano-whatever in it. Yes, this is confusing, but the scarf turns out to be very useful later on.

I came into this novel expecting a futuristic Frankenstein kind of tale, so the urban fantasy-esque creatures in the first chapter are surprising. With “immortal” in the title, it shouldn’t be a surprise that the novel discusses how to stop time, but I’m more interested in the surgical/medical aspects of the story.

The novel’s large cast gets confusing, with all the different House heads and their galvanized, and lengthy descriptions of what everyone looks like and what they’re wearing, but I still couldn’t keep track of everyone. Also, it’s never explained how stitches get coloured, because the life thread itself seems to be silvery.

I don’t fully understand what’s going on, but I’m firmly entrenched and along for the ride. Mix Mary Shelley’s Frankenstein with Amy Ewing’s The Jewel, and you get Devon Monk’s House Immortal: an intriguing blend of science, technology, politics, and who knows what else is in store.

Josephine Angelini
Trial by Fire (Worldwalker, Book 1)
Macmillan (US: 2nd September 2014)
Buy (US) Buy (UK) Buy (CA) Buy (Worldwide)
This world is trying to kill Lily Proctor. Her life=threatening allergies keep her from enjoying many of the experiences that other teenagers take for granted…which is why she is determined to enjoy her first (and perhaps only) high-school party. But Lily’s life never goes according to plan, and after a humiliating incident in front of half her graduating class Lily wishes she could just disappear. Suddenly Lily is in a different Salem – one overrun with horrifying creatures and ruled by powerful women called Crucibles. Strongest and cruellest of all the Crucibles is Lillian…Lily’s identical other self in this alternate universe. This new version of her world is terrifyingly sensual, and Lily is soon overwhelmed by new experiences. Lily realises that what makes her weak at home is exactly what makes her extraordinary in New Salem. It also puts her life in danger. Thrown into a world she doesn’t understand, Lily is torn between responsibilities she can’t hope to shoulder alone, and a love she never expected. But how can Lily be the saviour of this world when she is literally her own worst enemy?

Steve Bein
Year of the Demon (Fated Blades, Book 2)
Penguin NAL Roc (US & CA: 2nd September 2014)
Buy (US) Buy (UK) Buy (CA) Buy (Worldwide)
Detective Sergeant Mariko Oshiro has been promoted to Japan’s elite Narcotics unit – and with this promotion comes a new partner, a new case, and new danger. The underboss of a powerful yakuza crime syndicate has put a price on her head, and he’ll lift the bounty only if she retrieves an ancient iron demon mask that was stolen from him in a daring raid. However, Mariko has no idea of the tumultuous past carried within the mask – or of its deadly link with the famed Inazuma blade she wields. The secret of this mask originated hundreds of years before Mariko was born, and over time the mask’s power has evolved to bend its owner toward destruction, stopping at nothing to obtain Inazuma steel. Mariko’s fallen sensei knew much of the mask’s hypnotic power and of its mysterious link to a murderous cult. Now Mariko must use his notes to find the mask before the cult can bring Tokyo to its knees – and before the underboss decides her time is up…

Avery Hastings
Feuds (Feuds, Book 1)
Macmillan St. Martin’s Griffin (US: 2nd September 2014)
Buy (US) Buy (UK) Buy (CA) Buy (Worldwide)
For Davis Morrow, perfection is a daily reality. Like all Priors, Davis has spent her whole life primed to be smarter, stronger, and more graceful than the lowly Imperfects, or “Imps.” A fiercely ambitious ballerina, Davis is only a few weeks away from qualifying for the Olympiads and finally living up to her mother’s legacy when she meets Cole, a mysterious boy who leaves her with more questions each time he disappears. Davis has no idea that Cole has his own agenda, or that he’s a rising star in the FEUDS, an underground fighting ring where Priors gamble on Imps. Cole has every reason to hate Davis – her father’s campaign hinges on the total segregation of the Imps and Priors – but despite his best efforts, Cole finds himself as drawn to Davis as she is to him. Then Narxis, a deadly virus, takes its hold – and Davis’s friends start dying. When the Priors refuse to acknowledge the epidemic, Davis has no one to turn to but Cole. Falling in love was never part of their plan, but their love may be the only thing that can save her world…

Mary Miller
The Last Days of California
W. W. Norton Liveright (US: 2nd September 2014)
Buy (US) Buy (UK) Buy (CA) Buy (Worldwide)
Jess is fifteen years old and waiting for the world to end. Her evangelical father has packed up the family to drive west to California, hoping to save as many souls as possible before the Second Coming. With her long-suffering mother and rebellious (and secretly pregnant) sister, Jess hands out tracts to nonbelievers at every rest stop, Waffle House, and gas station along the way. As Jess’s belief frays, her teenage myopia evolves into awareness about her fracturing family.

Devon Monk
House Immortal (House Immortal, Book 2)
Penguin NAL Roc (US & CA: 2nd September 2014)
Buy (US) Buy (UK) Buy (CA) Buy (Worldwide)
One hundred years ago, eleven powerful ruling Houses consolidated all of the world’s resources and authority into their own grasping hands. Only one power wasn’t placed under the command of a single House: the control over the immortal galvanized… Matilda Case isn’t like most folk. In fact, she’s unique in the world, the crowning achievement of her father’s experiments, a girl pieced together from bits. Or so she believes, until Abraham Seventh shows up at her door, stitched with life thread just like her and insisting that enemies are coming to kill them all. Tilly is one of thirteen incredible creations known as the galvanized, stitched together beings immortal and unfathomably strong. For a century, each House has fought for control over the galvanized. Now the Houses are also tangled in a deadly struggle for dominion over death – and Tilly and her kind hold the key to unlocking eternity. The secrets that Tilly must fight to protect are hidden within the very seams of her being. And to get the secrets, her enemies are willing to tear her apart piece by piece…

Cherie Priest
Maplecroft (Borden Dispatches, Book 2)
Penguin NAL Roc (US & CA: 2nd September 2014)
Buy (US) Buy (UK) Buy (CA) Buy (Worldwide)
The people of Fall River, Massachusetts, fear me. Perhaps rightfully so. I remain a suspect in the brutal deaths of my father and his second wife despite the verdict of innocence at my trial. With our inheritance, my sister, Emma, and I have taken up residence in Maplecroft, a mansion near the sea and far from gossip and scrutiny. But it is not far enough from the affliction that possessed my parents. Their characters, their very souls, were consumed from within by something that left malevolent entities in their place. It originates from the ocean’s depths, plaguing the populace with tides of nightmares and madness. This evil cannot hide from me. No matter what guise it assumes, I will be waiting for it. With an axe.