Lenore Appelhans
The Best Things in Death (Memory Chronicles, short story collection)
Simon & Schuster (US & CA: 27th May 2014)
Buy (US) Buy (CA)
A week before his car crash with Felicia, Neil spends a perfect day at the swimming hole. He and Felicia have never been happier. But can he work up the courage to tell her that he loves her? Julian and Mira spy on Felicia and Autumn during a trip to Iceland. Libby and her boyfriend Jeremy head off on a road trip to Las Vegas and stumble upon truths potentially deadly to their relationship. An unexpected encounter with the charming Oliver brings cancer-patient Brady out of his shell.

Kady Cross
The Girl with the Windup Heart (Steampunk Chronicles, Book 4)
Harlequin Teen (US: 27th May 2014)
Buy (US) Buy (UK) Buy (CA) Buy (Worldwide)
London’s underworld is no place for a young woman, even one who is strong, smart and part-automaton like Mila. But when master criminal Jack Dandy inadvertently breaks her heart, she takes off, determined to find an independent life, one entirely her own. Her search takes her to the spangled shadows of the West End’s most dazzling circus. Meanwhile, taken captive in the Aether, Griffin King is trapped in an inescapable prison, and at the mercy of his archenemy, The Machinist. If he breaks under the hellish torment, The Machinist will claim his powers and control of the Aether itself, and no one in either world will be safe – especially not Finley Jayne and her misfit band of friends. Finley plunges headlong into the Aether the only way she knows how, by temporarily dying. But she cannot parry The Machinist’s manoeuvres for long. To defeat him for good, Griffin will have to confront his greatest fear and finally come face-to-face with the destructive power he wields. Gail Giles
Girls Like Us
Random House Candlewick (US & CA: 27th May 2014)
Buy (US) Buy (UK) Buy (CA) Buy (Worldwide)
Quincy and Biddy are both graduates of their high school’s special ed program, but they couldn’t be more different: suspicious Quincy faces the world with her fists up, while gentle Biddy is frightened to step outside her front door. When they’re thrown together as roommates in their first “real world” apartment, it initially seems to be an uneasy fit. But as Biddy’s past resurfaces and Quincy faces a harrowing experience that no one should have to go through alone, the two of them realise that they might have more in common than they thought – and more important, that they might be able to help each other move forward.

Megan Hart
Crossing the Line [available in eBook by itself; available in print anthology Tangled Up]
Harlequin Cosmo (US: 27th May 2014)
Buy (US) Buy (UK) Buy (CA) Buy (Worldwide)
5 Rules for Sexy Play in the Workplace! 1. Know the company policy – You just got an opportunity to finally snag that sweet corner office. The last thing you need is a wicked distraction… 2. Don’t date your boss – Sure, Jamison Wolfe has a smile that could send a woman into instant orgasmic joy. But more important, he’s your strict, control-freakish boss. Your hot, sexy, control-freakish boss. 3. Keep PDA out of the office – Okay, so you slipped up. Once. It was just the temptation of having Jamison at your complete naked mercy. 4. Prepare for the worst – This can’t go anywhere. You know it, he knows it. So why stop now? 5. Be discreet – Even when it gets more intense. Even when you push every limit you both possess…

Karen Healey
While We Run (When We Wake, Book 2)
Hachette Little, Brown (US: 27th May 2014)
Buy (US) Buy (UK) Buy (CA) Buy (Worldwide)
Abdi Taalib thought he was moving to Australia for a music scholarship. But after meeting the beautiful and brazen Tegan Oglietti, his world was turned upside down. Tegan’s no ordinary girl – she died in 2027, only to be frozen and brought back to life in Abdi’s time, 100 years later. Now, all they want is for things to return to normal (or as normal as they can be), but the government has other ideas. Especially since the two just spilled the secrets behind Australia’s cryonics project to the world. On the run, Abdi and Tegan have no idea who they can trust – and, when they uncover startling new details about the program, they realise that thousands of lives may be in their hands.

Demitria Lunetta
In the After (In the After, Book 1)
HarperCollins Teen (US & CA: 27th May 2014)
Buy (US) Buy (UK) Buy (CA) Buy (Worldwide)
Amy is watching TV when it happens – when the life she once knew is taken over by Them. Though their origin is unknown, these vile creatures are out to kill. But Amy, marooned in her high-security house, is able to survive. She even rescues “Baby,” an abandoned toddler, during a dangerous trip into town for supplies. Now, after years of hiding, they are miraculously rescued and taken to New Hope, a survivors’ colony on a former government research compound. New Hope seems safe…until the dark underbelly of this colony comes to light. And the more Amy uncovers, the bigger the target on her back grows. Forced to choose between protection from the creatures of the outside world and the dangers of New Hope, Amy must make a decision fast, for it could cost her – and Baby – their lives.

Katie McGarry
Take Me On (Pushing the Limits, Book 4)
Harlequin Teen (US: 27th May 2014)
Buy (US) Buy (UK) Buy (CA) Buy (Worldwide)
Champion kickboxer Haley swore she’d never set foot in the ring again after one tragic night. But then the guy she can’t stop thinking about accepts a mixed martial arts fight in her honour. Suddenly, Haley has to train West Young. All attitude, West is everything Haley promised herself she’d stay away from. Yet he won’t last five seconds in the ring without her help. West is keeping a big secret from Haley. About who he really is. But helping her – fighting for her – is a shot at redemption. Especially since it’s his fault his family is falling apart. He can’t change the past, but maybe he can change Haley’s future. Haley and West have agreed to keep their relationship strictly in the ring. But as an unexpected bond forms between them and attraction mocks their best intentions, they’ll face their darkest fears and discover love is worth fighting for. [**Bonus Content** The novella, Crossing the Line, will be included in the back of Take Me On (both print and e-book editions).] 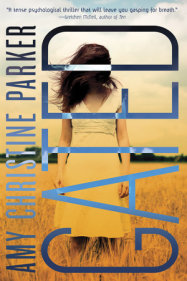 Amy Christine Parker
Gated (Gated, Book 2)
Random House Ember (US & CA: 27th May 2014)
Buy (US) Buy (UK) Buy (CA) Buy (Worldwide)
Lyla Hamilton is a loyal member of the Community. Her family was happy to be chosen by Pioneer to join such an lovely gated neighbourhood. Here, life seems perfect. But after meeting Cody, an outsider boy, Lyla starts questioning Pioneer, her friends, her family – everything. And if there’s one thing not allowed in the Community, it’s doubt. As Pioneer cleverly manipulates his flock toward disaster, the real question is: Will Lyla follow her heart or follow Pioneer over the edge?

Vicki Pettersson
The Given (Celestial Blues, Book 3)
HarperCollins Voyager (US & CA: 27th May 2014)
Buy (US) Buy (UK) Buy (CA) Buy (Worldwide)
After learning that his wife, Evelyn, survived the attack that killed him fifty years earlier, angel/PI Griffin Shaw will risk everything to find her. But to do so, Grif has to forsake his new love, journalist Katherine “Kit” Craig – the woman who made his life worth living again. Yet when Kit is attacked again, it becomes clear that there are forces in both the mortal and heavenly realms determined to protect secrets long buried in the past. To survive, Grif must convince Kit to put aside her personal hurt and help him discover the truth – a dangerous journey that will put them in the crosshairs of enemies old and new…and test the limits of what one angel will sacrifice for love.

This entry was posted in Amy Christine Parker, Demitria Lunetta, Gail Giles, Kady Cross, Karen Healey, Katie McGarry, Lenore Appelhans, Megan Hart, Vicki Pettersson and tagged Crossing the Line, Gated, Girls Like Us, In the After, Take Me On, Tangled Up, The Best Things in Death, The Girl with the Windup Heart, The Given, While We Run. Bookmark the permalink.