I’m going to preface this with a mini-rant, so YOU’VE BEEN WARNED.

I’m totally okay with cover reveals being specified for a particular day. Fine. I’m NOT okay with a specific time for a reveal. Because timezones, y’all. They (the tour organisers, the publisher, I don’t know) “embargoed” the cover until Thursday 13th February, 10:15AM New York time. (Even though it showed up on Google Images before then, and no, not on my blog.)

Anyway, that would’ve been Friday 14th February, 2:15AM Melbourne time. I don’t schedule posts (except for a note to myself), because as soon as I post a post, I share the links on all my various social media. Maybe they could be scheduled, too, but I prefer to do it myself, so I have control.

MORAL OF THE STORY: By all means specify a particular DATE for cover revealing, but do NOT specify a specific TIME. Because that’s just douchey to other timezones (particularly my timezone).

And now, the cover… 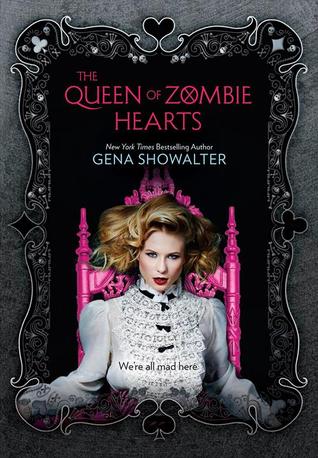 Gena Showalter
The Queen of Zombie Hearts (White Rabbit Chronicles, Book 3)
Harlequin Teen (US: 30th September 2014)
Buy (US) Buy (UK) Buy (CA) Buy (Worldwide)
Alice “Ali” Bell thinks the worst is behind her. She’s ready to take the next step with boyfriend Cole Holland, the leader of the zombie slayers…until Anima Industries, the agency controlling the zombies, launches a sneak attack, killing four of her friends. It’s then she realises that humans can be more dangerous than monsters…and the worst has only begun. As the surviving slayers prepare for war, Ali discovers she, too, can control the zombies…and she isn’t the girl she thought she was. She’s connected to the woman responsible for killing – and turning – Cole’s mother. How can their relationship endure? As secrets come to light, and more slayers are taken or killed, Ali will fight harder than ever to bring down Anima – even sacrificing her own life for those she loves.

Tagged The Queen of Zombie Hearts