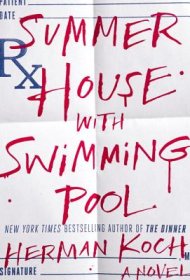 Herman Koch
Summer House with Swimming Pool
Random House Crown Hogarth (US & CA: 3rd June 2014)
Buy (US) Buy (UK) Buy (CA) Buy (Worldwide)
When a medical procedure goes horribly wrong and famous actor Ralph Meier winds up dead, Dr. Marc Schlosser needs to come up with some answers. After all, reputation is everything in this business. Personally, he’s not exactly upset that Ralph is gone, but as a high profile doctor to the stars, Marc can’t hide from the truth forever. It all started the previous summer. Marc, his wife, and their two beautiful teenage daughters agreed to spend a week at the Meiers’ extravagant summer home on the Mediterranean. Joined by Ralph and his striking wife Judith, her mother, and film director Stanley Forbes and his much younger girlfriend, the large group settles in for days of sunshine, wine tasting, and trips to the beach. But when a violent incident disrupts the idyll, darker motivations are revealed, and suddenly no one can be trusted. As the ultimate holiday soon turns into a nightmare, the circumstances surrounding Ralph’s later death begin to reveal the disturbing reality behind that summer’s tragedy.

Phoebe North
Stardawn (Starglass, Prequel) [short story]
Simon & Schuster (US & CA: 3rd June 2014)
Buy (US) Buy (CA)
How did Terra’s mother get involved in the rebellion? What role did the librarian really have in Terra’s past? 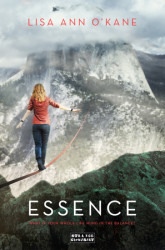 Lisa Ann O’Kane
Essence
Strange Chemistry (US, UK & CA: 3rd June 2014)
Buy (US) Buy (UK) Buy (CA) Buy (Worldwide)
Growing up in San Francisco’s Centrist Movement, sixteen-year-old Autumn Grace has always believed emotions – adrenaline, endorphins, even happiness – drain your Essence and lead to an early death. But her younger brother’s passing and a run-in with a group of Outsiders casts her faith into question. Ryder Stone, the sexy, rebellious leader of the Outsiders, claims Essence drain is nothing more than a Centrist scare tactic – and he can prove it. Autumn follows Ryder to his Community of adrenaline junkies and free spirits in Yosemite National Park, and they introduce her to a life of adventure, romance, sex, drugs and freedom. But as she discovers dark secrets beneath the Community’s perfect exterior, she realises the more she risks in search of the perfect rush, the further she has to fall.