Cyn Balog
Dead River
Random House (US & CA: 9th April 2013)
Buy (US) Buy (UK) Buy (CA) Buy (Worldwide)
My friends and I are spending prom weekend at a remote wooded cabin on the Dead. The Dead River. I thought it was going to be just us. I was wrong.

Holly Black
Black Heart (Curse Workers, Book 3)
Simon & Schuster Margaret K. McElderry (US & CA: 9th April 2013)
Buy (US) Buy (UK) Buy (CA) Buy (Worldwide)
Cassel Sharpe knows he’s been used as an assassin, but he’s trying to put all that behind him. He’s trying to be good, even though he grew up in a family of con artists and cheating comes as easily as breathing to him. He’s trying to do the right thing, even though the girl he loves is the one he should stay the farthest away from. And he’s trying to convince himself that working for the Feds is smart, even though he’s been raised to believe the government is the enemy. But with a mother on the lam, the girl he loves about to take her place in the Mob, and new secrets coming to light, the line between what’s right and what’s wrong becomes increasingly blurred. When the Feds ask Cassel to do the one thing he said he would never do again, he needs to sort out what’s a con and what’s truth. In a dangerous game and with his life on the line, Cassel may have to make his biggest gamble yet – this time on love. 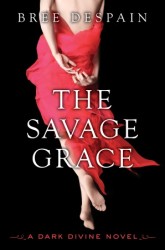 Bree Despain
The Savage Grace (Dark Divine, Book 3)
Random House Egmont (US & CA: 9th April 2013)
Buy (US) Buy (UK) Buy (CA) Buy (Worldwide)
Wrestling with the werewolf curse pulsing deep inside of her, Grace Divine was finally able to find her brother, but it nearly cost her everything. With her boyfriend Daniel stuck in wolf form and the greatest alpha, Sirhan, near death, a Challenging Ceremony to determine the new leader of the pack looms. Destined to be a bloody battle, it will be Grace’s final chance to stop Caleb Kalbi and his gang of demons. Will Grace be able to save her family and hometown from perishing, or will she have to give into the wolf?