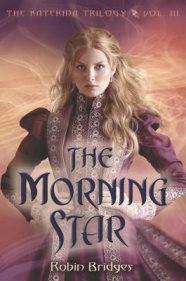 Robin Bridges
The Morning Star (Katerina, Book 3)
Random House Delacorte (US: 27th August 2013)
Buy (US) Buy (UK) Buy (CA) Buy (Worldwide)
St. Petersburg, Russia, 1890. Katerina Alexandrovna, Duchess of Oldenburg, wants to be known as a doctor, not a necromancer. But Tsar Alexander III forbids women to attend medical school; his interest in Katerina extends only to her ability to raise the dead. Twice now, Katerina has helped him by using her power to thwart the forces of darkness – vampires bent on resurrecting the lich tsar Konstantin Pavlovich so that he can take what he sees as his rightful place on the throne. Katerina thought she had bound Konstantin to the Greylands, the realm of the dead, but he has found a way out. Now he is searching for the Morning Star, a sword that will allow him to command a legion of supernatural warriors. Katerina must find the sword before Konstantin does – and she must travel to Egypt to do so. Along the way, she puts up with unwanted attention from her former fiancé, the nefarious Prince Danilo, and struggles with her feelings for her true love, George Alexandrovich. But with the looming threat from Konstantin, Katerina’s focus remains on the sword. Russia’s fate will be determined by whoever wields the Morning Star – and delivers the final blow.

Megan Hart
Tear You Apart
Harlequin MIRA (US: 27th August 2013)
Buy (US) Buy (UK) Buy (CA) Buy (Worldwide)
I’m on a train. I don’t know which stop I got on at; I only know the train is going fast and the world outside becomes a blur. I should get off, but I don’t. The universe is playing a cosmic joke on me. Here I had my life – a good life with everything a woman could want – and suddenly, there is something more I didn’t know I could have. A chance for me to be satisfied and content and maybe even on occasion deliriously, amazingly, exuberantly fulfilled. So this is where I am, on a train that’s out of control, and I am not just a passenger. I’m the one shovelling the furnace full of coal to keep it going fast and faster. If I could make myself believe it all happened by chance and I couldn’t help it, that I’ve been swept away, that it’s not my fault, that it’s fate…would that be easier? The truth is, I didn’t know I was looking for this until I found Will, but I must’ve been, all this time. And now it is not random, it is not fate; it is not being swept away. This is my choice. And I don’t know how to stop. Or even if I want to.