This post is part of the official launch for Megan Shepherd’s A Cold Legacy. Below, you’ll find the author’s links, and information about her books:

END_OF_DOCUMENT_TOKEN_TO_BE_REPLACED

Tagged A Cold Legacy, Her Dark Curiosity, The Cage, The Madman's Daughter

Tagged Asylum, Captive, Elusion, Fade Away and Radiate, Hearts of Chaos, Her Dark Curiosity, Impostor, Into the Still Blue, Itty Bitty Kitty Committee, Such Sweet Sorrow, The Madman's Daughter, The Undead Pool, This Side of Salvation, Up from the Grave, White Space 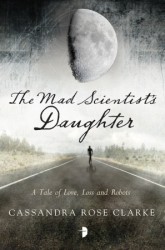 Cassandra Rose Clarke
The Mad Scientist’s Daughter
Random House Angry Robot (US & CA: 29th January 2013)
Buy (US) Buy (UK) Buy (CA) Buy (Worldwide)
Finn looks and acts human, though he has no desire to be. He was programmed to assist his owners, and performs his duties to perfection. A billion-dollar construct, his primary task now is to tutor Cat. As she grows into a beautiful young woman, Finn is her guardian, her constant companion…and more. But when the government grants rights to the ever-increasing robot population, however, Finn struggles to find his place in the world.

Marie Lu
Prodigy (Legend, Book 2)
Penguin (US, UK & CA: 29th January 2013)
Buy (US) Buy (UK) Buy (CA) Buy (Worldwide)
June and Day arrive in Vegas just as the unthinkable happens: the Elector Primo dies, and his son Anden takes his place. With the Republic edging closer to chaos, the two join a group of Patriot rebels eager to help Day rescue his brother and offer passage to the Colonies. They have only one request – June and Day must assassinate the new Elector. It’s their chance to change the nation, to give voice to a people silenced for too long. But as June realises this Elector is nothing like his father, she’s haunted by the choice ahead. What if Anden is a new beginning? What if revolution must be more than loss and vengeance, anger and blood – what if the Patriots are wrong?

Megan Shepherd
The Madman’s Daughter
HarperCollins Balzer + Bray (US & CA: 29th January 2013)
Buy (US) Buy (UK) Buy (CA) Buy (Worldwide)
Sixteen-year-old Juliet Moreau has built a life for herself in London – working as a maid, attending church on Sundays, and trying not to think about the scandal that ruined her life. After all, no one ever proved the rumours about her father’s gruesome experiments. But when she learns he is alive and continuing his work on a remote tropical island, she is determined to find out if the accusations are true. Accompanied by her father’s handsome young assistant, Montgomery, and an enigmatic castaway, Edward – both of whom she is deeply drawn to – Juliet travels to the island, only to discover the depths of her father’s madness: He has experimented on animals so that they resemble, speak, and behave as humans. And worse, one of the creatures has turned violent and is killing the island’s inhabitants. Torn between horror and scientific curiosity, Juliet knows she must end her father’s dangerous experiments and escape her jungle prison before it’s too late. Yet as the island falls into chaos, she discovers the extent of her father’s genius – and madness – in her own blood.

END_OF_DOCUMENT_TOKEN_TO_BE_REPLACED

Amanda Grace‘s The Truth About Us and one unrelated untitled novel to Llewellyn Flux (NA). A 16-year-old enrolled in a college-level program has an affair with one of her professors.

Jeff Hirsch‘s thriller Dog Soldier (2013) to Scholastic. A 16 year-old soldier abandons his post and tries to make his way home across a country torn apart by a near-future civil war, while being hunted by both sides and accompanied only by a loyal stray dog.

Tagged Blackout, Deadline, Dog Soldier, Feed, The Madman's Daughter, The Truth About Us

Liz Coley‘s Pretty Girl 13 to Katherine Tegen Books (World English) for publication in 2012. About a girl abducted at 13, returned at 16, with no memory of the missing years but with a host of alternate personalities who have kept her sane.

Karsten Knight‘s next 2 books that continue the dangerous story of a fiery volcano demigoddess, to Simon & Schuster Children’s (World).

Dawn Metcalf‘s Indelible Ink in a 2-book deal to Harlequin Teen (World). Features a heroine who is accidentally marked by a mysterious boy, which places her in the midst of a dangerous, otherworldly plot to end the Age of Man.

Jackson Pearce‘s Fathomless. A young mermaid wants to leave the sisterhood of dark, soulless creatures & regain her humanity, which she can only do by convincing a mortal to love her & stealing his soul.

Megan Shepherd‘s The Madman’s Daughter to Balzer & Bray (NA) in a 3-book deal for publication in 2013. A Gothic thriller trilogy pitched as loosely inspired by H. G. Wells’ classic THE ISLAND OF DR. MOREAU, in which Dr. Moreau’s 16-year-old daughter travels to her estranged father’s island & finds murder, madness, & a love triangle with an enigmatic castaway & her father’s handsome young assistant.