Amy has moved to rural Rockville to stay with her great-aunt. There’s a mist separating their property from the next, and in the clearing Amy meets a guy her age. Henry Briggs doesn’t talk or dress like anyone contemporary – because where he lives, it’s 1944. And whilst Amy is more comfortable with Henry in his time, she knows their relationship can’t last but tries to enjoy it while she can.

There’s difficult subject matter here, namely domestic abuse. Amy moved from Seattle to get distance from reminders of an abusive relationship. She knows she shouldn’t have stayed with the guy for as long as she did, and she still kicks herself for it. But she also takes it out on her mother, who should’ve “protected” Amy, though I get the feeling she didn’t confide in her mother early on about the abuse. I think Amy, in hindsight, wanted to be rescued so she wouldn’t have to save herself, and that’s…sad, but understandable.

This is such a beautiful book. Normally romance in fiction doesn’t work for me because I don’t like the characters, or I don’t like their relationship, but Heather Davis has created an extraordinarily heartfelt story with two lead characters I adore together. It’s a special, memorable novel, and though impossible it’s ultimately charming. Minus the epilogue, which really didn’t work for me. And the students, who just aren’t appealing.

END_OF_DOCUMENT_TOKEN_TO_BE_REPLACED 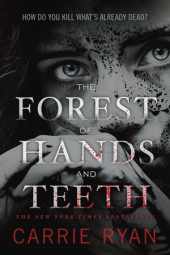 Cover for Heather Davis’s The Clearing, and the US paperback cover for Carrie Ryan’s The Forest of Hands and Teeth (I really like the redesign!).

Tagged The Clearing, The Forest of Hands and Teeth