When you have to be told how to pronounce a title, that’s probably a sign the title needs changing. It looks like “The One-Hundred” to me, but the publisher says it’s “The Hundred”. Even the IMdb page calls it “The Hundred”. Stylistically, The 100 seems good as branding, but it’s just not practical.

Ah, book packagers. They make excellent sense from a business point of view, but kind of insulting from a reader’s point of view. How do they get off making vast generalisations about what they think people want to read? Well, Alloy Entertainment gives us three spaceships – thumbs-up! But dreadfully underused – boo!

Out of the four main characters, only one is based on a spaceship – the other three go to live on Earth. And what happens down there is lite-survivalist stuff, which doesn’t work for me. (Much better survivalist stuff can be found in Mindy McGinnis’s Not a Drop to Drink, or Blythe Woolston’s Black Helicopters. I recommend both books, especially the latter.)

The spaceship happenings are a lot more intriguing. There seems to be a class system: three different spaceships, linked by skybridges. Phoenix is the wealthy one, Walden is the poor one, and Arcadia is middle. It’s during the comet viewing party that Glass uncovers a deadly secret.

The problem with this novel is one most common in romance novels: the really interesting stuff is in the past. The biggest conflicts are over. We’re left with residual effects, so they’re not strong enough to hook readers. The clinic Clarke finds, Wells’ dobbing, Bellamy’s mum and sister, Glass’ hospitalisation…these are all revealed during flashbacks, and when your flashbacks are more interesting than the present, the story is being told in the wrong timeframe.

Also troublesome is that Alloy Entertainment created this book series to go with a TV series (due to broadcast in March 2014 in the US). My tastes in books and television vary greatly (mostly animated comedies and sports entertainment), so the book hasn’t lured me into viewing the series (which may or may not be available in Australia, anyway). It has, however, given me an idea of what the characters look like, thanks to the IMDb page. Problem: Glass isn’t listed there (last checked: 26th December 2013), and when the most appealing character and plot may not even get screen-time…well, that’s another reason not to watch.

Writing-wise (rather than story-wise), my only real quibble is that the chapters tend to end with a sentence/paragraph that’s supposed to be deep and meaningful, but just makes my eyes roll. You know when drunken people think they’re being really profound, but they’re actually spouting faff? That.

It doesn’t surprise me that some people DNF’d this book. It is a bit meh in the beginning, and the action doesn’t really kick in until the comet. All this said, I do plan to check out Book 2. I need more spaceship page-time, damn it! 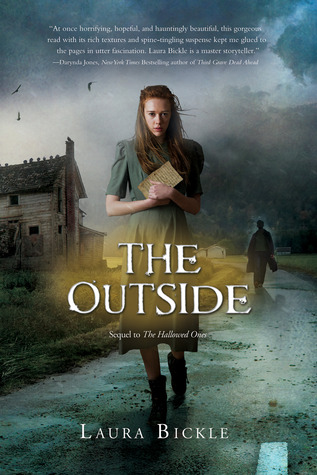 Tagged Promised, The 100, The Coldest Girl in Coldtown, The Outside