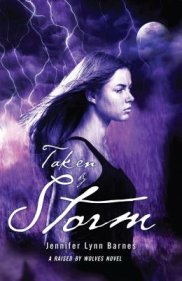 Jennifer Lynn Barnes
Taken by Storm (Raised by Wolves, Book 3)
Random House Egmont (US & CA: 9th July 2013)
Buy (US) Buy (UK) Buy (CA) Buy (Worldwide)
In the eye of a storm stands Bryn, the alpha of the Cedar Ridge werewolf pack. She is young. Female. Human. Physically weaker than any werewolf, she could never survive a battle with another Alpha, the strongest, fiercest, and canniest of his pack. Yet she cannot refuse a summons from the werewolf Senate. A rogue werewolf is attacking humans. The risk of exposure threatens to destroy pack life, and the centre of the crisis is Cedar Ridge territory – her lands. Bryn has no choice but to attend the meeting, a gathering of the most powerful werewolves on the continent. The subject is the rogue wolf, but Bryn knows the other packs want what she has. Her territory. Her females. Her pack. They want her death. Werewolf law prevents the other alphas from making a direct attack. It also prevents her former alpha, the mysterious and powerful Callum, from coming to her aid. But it doesn’t prevent Bryn from knowing what she wants. To keep her lands. To protect her pack. To survive. 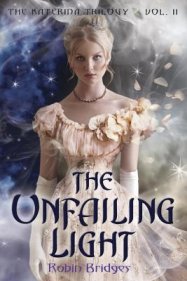 Robin Bridges
The Unfailing Light (Katerina, Book 2)
Random House Ember (US & CA: 9th July 2013)
Buy (US) Buy (UK) Buy (CA) Buy (Worldwide)
Having had no choice but to use her power has a necromancer to save Russia from dark forces, Katerina Alexandrovna, Duchess of Oldenburg, now wants to forget that she ever used her special powers. She’s about to set off to pursue her lifelong dream of attending medical school when she discovers that Russia’s arch nemesis – who she thought she’d destroyed – is still alive. So on imperial orders Katerina remains at her old finishing school. She’ll be safe there, because the empress has cast a potent spell to protect it against the vampires and revenants that are bent on toppling the tsar and using Katerina for their own gains. But to Katerina’s horror, the spell unleashes a vengeful ghost within the school, a ghost more dangerous than any creature trying to get in.

Sara Grant
Half Lives
Hachette (US: 9th July 2013)
Buy (US) Buy (UK) Buy (CA) Buy (Worldwide)
Seventeen-year-old Icie’s parents have given her $10,000 in cash, a map of a top-secret bunker, and instructions to get there by any means necessary. They have news of an imminent viral attack and know that the bunker is Icie’s only hope for survival. Along with three other teens, she lives locked away for months, not knowing what’s happening in the outside world or who has survived. And are they safe in the bunker after all? Generations in the future, a mysterious cult worships the very mountain where Icie’s secret bunker was built. They never leave the mountain, they’re ruled by a teenager…and they have surprising ties to Icie.

Darynda Jones
Fifth Grave Past the Light (Charley Davidson, Book 5)
Macmillan St. Martin’s (US: 9th July 2013); Hachette Little, Brown Piatkus (UK: 9th July 2013)
Buy (US) Buy (UK) Buy (CA) Buy (Worldwide)
Charley Davidson isn’t your everyday, run-of-the-mill grim reaper. She’s more of a paranormal private eye/grim reaper extraordinaire. However, she gets sidetracked when the sexy, sultry son of Satan, Reyes Farrow, moves in next door. To further complicate matters, Reyes is her main suspect in an arson case. Charley has vowed to stay away from him until she can find out the truth…but then dead women start appearing in her apartment, one after another, each lost, confused, and terrified beyond reason. When it becomes apparent that her own sister, Gemma, is the serial killer’s next target Charley has no choice but to ask for Reyes’ help. Arsonist or not, he’s the one man alive who could protect Gemma no matter who or what came at her. But he wants something in return. Charley. All of her, body and soul. And to keep her sister safe, it is a price she is willing to pay.

Tagged Fifth Grave Past the Light, Half Lives, Taken by Storm, The Unfailing Light

END_OF_DOCUMENT_TOKEN_TO_BE_REPLACED

Tagged Arise, For Darkness Shows the Stars, Glimpse, Hollyweird, Seawitch, Taken by Storm, The Nightworld, The Other Life, Thumped