I understand why Tara Moss hasn’t written that kind of book, though. The people who most need to listen would likely refuse to read it. So since we can’t change other people, Speaking Out is more about changing ourselves. Forming better, stronger arguments, and the way we deliver them, in order to give us the best possible chance of being heard.

Which makes reading the section focused on the spoken word, rather than the written, rather awkward.

I remember an ad for a particular season of Australia’s The Biggest Loser. A primary school-aged boy, a competitor on the programme, spoke of the kids at school teasing him because he was fat. And so he signed up to join the show. I don’t blame him; he likely just wanted the bullying to stop. And because the kids picked on his appearance, he chose to try to change it. It’s a sad world that people teach kids to lose weight, rather than teach kids not to bully/tease/pick on others.

Which brings us to Speaking Out. Women are often dismissed when they speak out, with listeners blaming the orator’s “high-pitched voice” or “vocal fry”. This handbook has tips for adjusting your voice to sound more “acceptable”. The author says her tips are optional, but the very fact that they’re included leads me to believe she thinks we should definitely consider them.

Do I have a high-pitched voice or vocal fry? I don’t know, but I certainly had a lisp growing up. I may still have one now. Should I feel grateful or not that tips for eliminating a lisp aren’t included? On one hand, I’m glad not to be patronised and victim-blamed. (E.g. People wouldn’t pick on you for having a lisp if you didn’t have one, so you should get rid of yours.) On the other hand, does this book erase my type of vocal issue?

But again, this book is about changing oneself, instead of changing other people’s shoddy behaviour towards you.

The next part is best suited to students, with lots of advice on research, structuring arguments, and presenting them. I sped through this part, just to get it finished – I wasn’t interested, but students should get a lot out of it.

The third section is the most helpful, where the handbook really earns its stripes – on what to expect when speaking out. While I read it, male radio broadcasters’ comments about holding a woman’s head under icy water were being heavily discussed in the media, including social. All the diversionary tactics listed in the book were played out in public. But because violent language against women happens on a regular basis, this part of the book is timeless.

There are contributions from a handful of women who’ve “survived social media”. Most of the women included have worthy contributions, but one name will raise eyebrows: Amanda Palmer. She has a history of problematic behaviour; there are details here. (Hover over the text in the post – they’re clickable links.) Remember when she invited Jian Ghomeshi to join her tour? After a lot of push-back (and rightfully so) from the public, Palmer announced he would no longer be a guest on her tour, and that she had made a “snap judgment”.

Her “snap judgment” was to provide a platform for someone who allegedly “non-consensually beat up four different women during sexual encounters”. And “eight different women […] have come forward to accuse Ghomeshi of violence, sexual abuse, or harassment”. (Quotes from the Stereogum article.) Palmer initially chose to side with THIS GUY, instead of the numerous victims.

So what the hell is she doing in a handbook that supposedly empowers women and girls to speak out, when she at first chose not to believe the women who’d spoken out against Ghomeshi?

After taking time to calm and think, I was more open-minded to reading the piece. After all, her contribution could be about how she was wrong to initially support Ghomeshi. How speaking out in this case probably wasn’t a good idea. How Palmer had learned from the experience, about the importance of researching, thinking, and addressing one’s own biases (such as not believing victims of sexual violence and harassment) before speaking out.

My gut reaction turned out to be correct: Palmer’s contribution mentions nothing of her initial support for an alleged sexual offender. Mentions nothing about how others were right to call her out on including him on her tour.

So yes, her contribution shouldn’t be here because it’s ultimately hollow. And considering that Tara Moss emphasises the importance of research, I’m surprised she didn’t investigate Palmer’s history of problematic behaviour. It didn’t take me long to dig up those links and read them. So why didn’t Moss?

Maybe this handbook is an example of White Feminism. While it very briefly mentions intersections, this book is pretty much geared towards straight white cis-women. Understandable, because the author acknowledges it’s not her place to speak out on identities she doesn’t have.

Moss includes statistics throughout the handbook, but when it comes to the conviction rate on reported crimes of cyber-stalking/cyber-bullying…no statistics are included. Because there aren’t any official statistics, or because the conviction rate is so low that it may discourage victims from reporting crimes, knowing there’s so low a chance of the perpetrator facing any justice?

My depression was already in a bad way before reading this book. It didn’t improve over the course of it. Speaking Out is a major downer. It doesn’t mean to be – it’s supposed to be inspiring, motivating, encouraging. But it had the opposite effect on me. 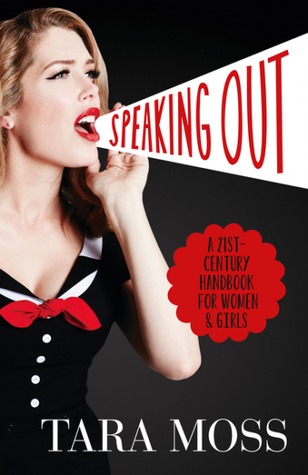 Tara Moss
Speaking Out
HarperCollins (AU: 23rd May 2016)
Buy (US) Buy (Worldwide)
A short, accessible and practical handbook for women on speaking out safely and confidently. Worldwide, less than one out of every four people we hear from or about in the media is female, and men outnumber women in parliament by four to one. If half of humanity’s experiences, perspectives and possible solutions to world problems are under-represented, or entirely unheard, all of us lose out. Tara Moss has spent 20 years in the public sphere and has had to face down nerves, critics and backlash. She has become a leader in speaking out. In this handbook she offers advice on preparation, speaking out and negotiating public spaces. With a special focus on public speaking, social media and online safety, she offers tips on how to research, form arguments, find support and handle criticism. This is a guide for women young and old that not only helps them find their voice, but argues passionately for why it matters.