Caitlin Kittredge
Soul Trade (Black London, Book 5)
Macmillan St. Martin’s (US: 28th August 2012)
Buy (US) Buy (UK) Buy (CA) Buy (Worldwide)
Normally, Pete Caldecott stays far away from magical secret societies. But ever since her partner and boyfriend Jack Winter stopped a primordial demon from ripping into our world, every ghost, demon, and mage in London has been wide awake – and hungry. And the magical society in question needs their help putting things right. It all begins with an invitation. Five pale figures surround Pete in the cemetery to “cordially” invite her to a gathering of the Prometheus Club. Pete’s never heard of them, but Jack has – and he’s not thrilled about it. Especially the part that says, “Attend or die.” The Prometheans wouldn’t come to London unless something big’s about to go down. So Pete and Jack decide to play it safe and make nice with the club – even if that means facing down an army of demons in the process. But now that they’ve joined the group, they’re about to discover that membership comes at a cost…and has apocalyptic consequences.

Karsten Knight
Embers & Echoes (Wildefire, Book 2)
Simon & Schuster (US & CA: 28th August 2012)
Buy (US) Buy (UK) Buy (CA) Buy (Worldwide)
Ashline Wilde may have needed school to learn that she is actually a reincarnated goddess, but she’s ready to move beyond books. She leaves her California boarding school behind and makes for Miami, where she meets a new group of deities and desperately seeks her sister Rose, the goddess of war. But she’s also looking for love – because even though her romance with Cole had to be snuffed, Ash is a volcano goddess – and she doesn’t get burned. 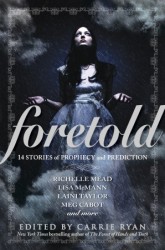 Carrie Ryan (ed.)
Foretold (Anthology)
Random House Delacorte (US & CA: 28th August 2012)
Buy (US) Buy (UK) Buy (CA) Buy (Worldwide)
Explore the concepts of prophecy and prediction in this story collection edited by Carrie Ryan. Have you ever been tempted to look into the future? To challenge predictions? To question fate? It’s human nature to wonder about life’s twists and turns. But is the future already written – or do you have the power to alter it? From fantastical prophecies to predictions of how the future will transpire, Foretold is a collection of stories about our universal fascination with life’s unknowns and of what is yet to come. This collection includes works from: Malina Lo, Lisa McMann, Kami Garcia, Margaret Stohl, Laini Taylor, Michael Grant, Saundra Mitchell, Richelle Mead, Matt de la Pena, Meg Cabot, Heather Brewer, Diana Peterfreund, Simone Elkeles, Carrie Ryan.

Neal Shusterman
UnWholly (Unwind, Book 2)
Simon & Schuster (US & CA: 28th August 2012)
Buy (US) Buy (UK) Buy (CA) Buy (Worldwide)
Thanks to Connor, Lev, and Risa – and their high-profile revolt at Happy Jack Harvest Camp – people can no longer turn a blind eye to unwinding. Ridding society of troublesome teens while simultaneously providing much-needed tissues for transplant might be convenient, but its morality has finally been brought into question. However, unwinding has become big business, and there are powerful political and corporate interests that want to see it not only continue, but also expand to the unwinding of prisoners and the impoverished. Cam is a product of unwinding: made entirely out of the parts of other unwinds he is a teen who does not technically exist. A futuristic Frankenstein, Cam struggles with a search for identity and meaning and wonders if a rewound being can have a soul. And when the actions of a sadistic bounty hunter cause Cam’s fate to become inextricably bound with the fates of Connor, Risa, and Lev, he’ll have to question humanity itself.