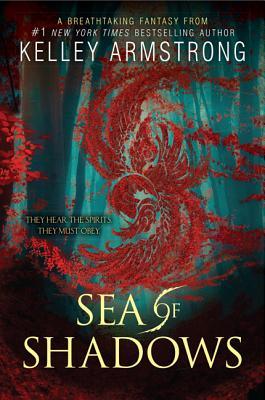 Kelley Armstrong
Sea of Shadows (Age of Legends, Book 1)
HarperCollins (US: 3rd March 2015)
Buy (US) Buy (UK) Buy (CA) Buy (Worldwide)
To save the empire, they must fight the shadows. In the Forest of the Dead, where the empire’s worst criminals are exiled, twin sisters Moria and Ashyn are charged with a dangerous task. For they are the Keeper and the Seeker, and each year they must quiet the enraged souls of the damned. Only this year, the souls will not be quieted. Accompanied by a stubborn imperial guard and a dashing condemned thief, the girls make their way to warn the emperor. But a terrible secret awaits them at court – one that will alter the balance of their world forever.

Kathy & Becky Hepinstall
Sisters of Shiloh
Houghton Mifflin Harcourt (US: 3rd March 2015)
Buy (US) Buy (UK) Buy (CA) Buy (Worldwide)
In a war pitting brother against brother, two sisters choose their own battle. Joseph and Thomas are fresh recruits for the Confederate Army, daring to join the wild fray that has become the seemingly endless Civil War, sharing everything with their fellow soldiers – except the secret that would mean their undoing: they are sisters. Before the war, Joseph and Thomas were Josephine and Libby. But that bloodiest battle, Antietam, leaves Libby to find her husband, Arden, dead. She vows vengeance, dons Arden’s clothes, and sneaks off to enlist with the Stonewall Brigade, swearing to kill one Yankee for every year of his too-short life. Desperate to protect her grief-crazed sister, Josephine insists on joining her. Surrounded by flying bullets, deprivation, and illness, the sisters are found by other dangers: Libby is hurtling toward madness, haunted and urged on by her husband’s ghost; Josephine is falling in love with a fellow soldier. She lives in fear both of revealing their disguise and of losing her first love before she can make her heart known to him.

Justine Larbalestier
Razorhurst
Soho (US: 3rd March 2015)
Buy (US) Buy (UK) Buy (CA) Buy (Worldwide)
Sydney’s deadly Razorhurst neighborhood, 1932. Gloriana Nelson and Mr. Davidson, two ruthless mob bosses, have reached a fragile peace – one maintained by “razor men.” Kelpie, orphaned and living on the street, is blessed and cursed with the ability to see Razorhurst’s many ghosts, and she sees the cracks already forming. Then Kelpie meets Dymphna Campbell. Dymphna is a legendary beauty and prized moll of Gloriana Nelson. She’s earned the nickname “Angel of Death” for the trail of beaus who have died trying to protect her from Mr. Davidson’s assassins. Unbeknownst to Kelpie, Dymphna can see ghosts, too, and as Gloriana’s hold crumbles one burly henchman at a time, the girls will need one another more than ever. As loyalties shift and betrayal threatens at every turn, Dymphna is determined to not only survive, but to rise to the top with Kelpie at her side – and to save Kelpie from both the living and the dead. 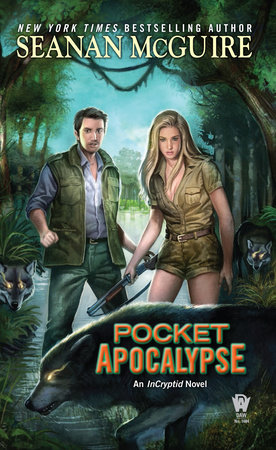 Seanan McGuire
Pocket Apocalypse (InCryptid, Book 4)
Penguin DAW (US & CA: 3rd March 2015)
Buy (US) Buy (UK) Buy (CA) Buy (Worldwide)
Alexander Price has survived gorgons, basilisks, and his own family – no small feat, considering that his family includes two telepaths, a reanimated corpse, and a colony of talking, pantheistic mice. Still, he’s starting to feel like he’s got the hang of things…at least until his girlfriend, Shelby Tanner, shows up asking pointed questions about werewolves and the state of his passport. From there, it’s just a hop, skip, and a jump to Australia, a continent filled with new challenges, new dangers, and yes, rival cryptozoologists who don’t like their “visiting expert” very much. Australia is a cryptozoologist’s dream, filled with unique species and unique challenges. Unfortunately, it’s also filled with Shelby’s family, who aren’t delighted by the length of her stay in America. And then there are the werewolves to consider: infected killing machines who would like nothing more than to claim the continent as their own. The continent which currently includes Alex. Survival is hard enough when you’re on familiar ground. Alex Price is very far from home, but there’s one thing he knows for sure: he’s not going down without a fight. 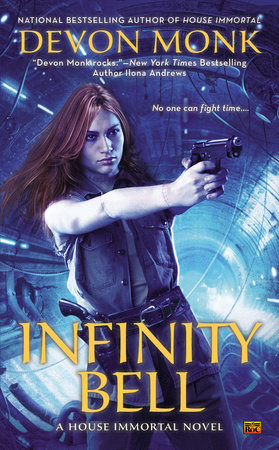 Devon Monk
Infinity Bell (House Immortal, Book 2)
Penguin Roc (US & CA: 3rd March 2015)
Buy (US) Buy (UK) Buy (CA) Buy (Worldwide)
Matilda Case isn’t normal. Normal people aren’t stitched together, inhumanly strong, and ageless, as she and the other galvanized are. Normal people’s bodies don’t hold the secret to immortality – something the powerful Houses will kill to possess. And normal people don’t know that they’re going to die in a few days. Matilda’s fight to protect the people she loves triggered a chaotic war between the Houses and shattered the world’s peace. On the run, she must find a way to stop the repeat of the ancient time experiment that gifted her and the other galvanized with immortality. Because this time, it will destroy her and everything she holds dear. Caught in a cat-and-mouse game of lies, betrayal, and unseen foes, Matilda must fight to save the world from utter destruction. But time itself is her enemy, and every second brings her one step closer to disaster…

Laura Ruby
Bone Gap
HarperCollins Balzer + Bray (US & CA: 3rd March 2015)
Buy (US) Buy (UK) Buy (CA) Buy (Worldwide)
Everyone knows Bone Gap is full of gaps – gaps to trip you up, gaps to slide through so you can disappear forever. So when young, beautiful Roza went missing, the people of Bone Gap weren’t surprised. After all, it wasn’t the first time that someone had slipped away and left Finn and Sean O’Sullivan on their own. Just a few years ago, their mother hightailed it to Oregon for a brand-new guy, a brand-new life. That’s just how things go, the people said. Who are you going to blame? Finn knows that’s not what happened with Roza. He knows she was kidnapped, ripped from the cornfields by a dangerous man whose face he cannot remember. But the searches turn up nothing, and no one believes him anymore. Not even Sean, who has more reason to find Roza than anyone and every reason to blame Finn for letting her go.