Martin Misunderstood – Karin Slaughter “…strange but enjoyable…This is not your standard tale of romance, yet these tragic characters do make a realistic couple.” Buy

Swung – Ewan Morrison “I believed it, that this situation and these characters are very real. This novel is truthful…David and Alice’s thoughts and feelings will probably ring familiar.” Buy

Swallowing Darkness – Laurell K. Hamilton “One can’t deny that the author has quite the imagination…” Buy

Living with the Dead – Kelley Armstrong “But what’s most disturbing and intriguing about the kumpania is who’s living underground – and why. It truly makes you step back and look on in awe of the author’s ideas. Wow.” Buy

I Can Has Cheezburger? – Professor Happycat & ICanHasCheezburger.com “…you’re sure to find a LOLcat to show how you’re feeling…” Buy

Cat with Books on a Hot Day

Just showing the one photo here, so as not to clog your blog reader 😉

Anyway, Manny’s going through a tough time, because even though it’s spring, the weather seems to be summer. And we don’t have air-con. So Manny stretches out, but he can’t nap because it’s too damn hot. And he’s only a short-haired. Long-haired cats must be near death.

So, the photos are all here, but here’s the rundown:

Kelley Armstrong’s Living with the Dead: Not particularly enthused, but his eyes are alert.

Laurell K. Hamilton’s Swallowing Darkness: Not sure if he’s cuddling or attacking it. But his eyes are psycho, so I guess the latter. (The book is still in good condition, though.)

Rachel Caine’s Midnight Alley: He’s distracted by something else. Probably because the book only glows in dark, not in the light. Can’t win ’em all… 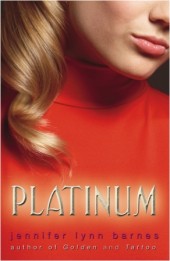 Supernatural happenings may be the downfall of the most popular girl at Emory High in Jennifer Lynn Barnes’ sequel to Golden.

Lilah Covington’s mum will be marrying Lissy’s uncle, and thus they’re family. Lissy, sister Lexie, and their mother and grandmother all have the Sight, each in its various forms – and now it seems Lilah has retronition, the ability to see into the past. That’s why only she can communicate with the ghost who’s suddenly always around. Plus Lilah’s also having visions in which there will be murder…but the only way to stop it and history repeating is to step inside her vision.

Lilah is a caricature popular girl: she knows she’s on top, and she’ll stamp on anyone who tries to better her – even her supposed best friend. There doesn’t seem to be any real friendship amongst them, but surely even popular girls experience real friendship.

Then there’s the girl from forty years ago, who was so in love with her own beauty, power and popularity that she thrived watching boys fight to the death over her. It’s lame, and Helen is a caricature as well as Lilah.

But despite its flaws, this is actually a fun read. Try not to think, just speed through it, and you should find it a pleasant way to pass your day. Now, if only the author’s The Squad books were published in Australia…

It’s October 19th (well, for one more hour) – Jennifer Lynn Barnes’ birthday. We don’t really have a history together, except that I’ve read and enjoyed her first two novels. Haven’t got my mitts on the rest yet, though. But you can get them for yourself: Golden, Tattoo, Platinum, Perfect Cover, Killer Spirit and Fate.

And if you happen to be on the Internet on Tuesday 21st October (which may be Wednesday 22nd October, Melbourne time), you might want to check out the guest blog that I wrote for Literary Escapism. May or may not be a contest.

Anyway, I’m running on not much sleep. Went to bed at midnight, woke up at 3:15 and couldn’t get to sleep until about 6. And that was only napping. May have napped some more until 9:30. Sore throats I can handle. But when my freaking running nose keeps me awake? Grrr…

So right now I’m like South Park‘s Kyle’s cousin, also named Kyle. Nasal voice, heavy breathing, whinges about his sinuses, whinges about everything if I remember correctly…Kyle Schwartz looks like this. At the moment, I’m not much different.