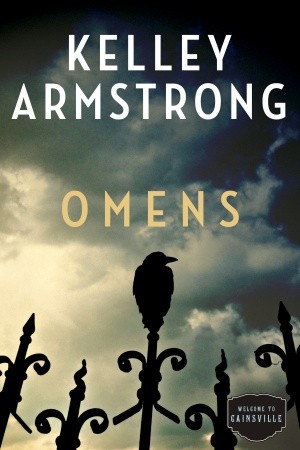 Cainsville is like a missing link between Kelley Armstrong’s Otherworld and Nadia Stafford series: There’s a bit of supernatural stuff, but generally it’s more about crime. Maybe it’s because Omens is the first in a trilogy, but at times it feels like it goes off on tangents. It also seems a bit long – did we really need all those job-seeking and house-hunting scenes? Perhaps they’re included to slow the novel’s pace, but they don’t feel necessary.

There’s a spoilery plot element that I absolutely love – and it’s not supernatural. You’ll know when you get to it. If we’re on the same wavelength 😉 But I will say this: Anita Mosley is the most fascinating character. Her story interests me more than Olivia’s, to be honest.

Now, if you’ll excuse me, I need to look up the English translations of these Welsh words…

Kelley Armstrong
Omens (Cainsville, Book 1)
Penguin Dutton (US: 20th August 2013); Hachette Little, Brown (UK: 20th August 2013); Random House (CA: 20th August 2013)
Buy (US) Buy (UK) Buy (CA) Buy (Worldwide)
Twenty-four-year-old Olivia Taylor Jones has the perfect life. The only daughter of a wealthy, prominent Chicago family, she has an Ivy League education, pursues volunteerism and philanthropy, and is engaged to a handsome young tech firm CEO with political ambitions. But Olivia’s world is shattered when she learns that she’s adopted. Her real parents? Todd and Pamela Larsen, notorious serial killers serving a life sentence. When the news brings a maelstrom of unwanted publicity to her adopted family and fiancé, Olivia decides to find out the truth about the Larsens. Olivia ends up in the small town of Cainsville, Illinois, an old and cloistered community that takes a particular interest in both Olivia and her efforts to uncover her birth parents’ past. Aided by her mother’s former lawyer, Gabriel Walsh, Olivia focuses on the Larsens’ last crime: the one her birth mother swears will prove their innocence. But as she and Gabriel start investigating the case, Olivia finds herself drawing on abilities that have remained hidden since her childhood, gifts that make her both a valuable addition to Cainsville and deeply vulnerable to unknown enemies. Because there are darker secrets behind her new home and powers lurking in the shadows that have their own plans for her.

Madeleine Roux
Asylum
HarperCollins (US & CA: 20th August 2013)
Buy (US) Buy (UK) Buy (CA) Buy (Worldwide)
For sixteen-year-old Dan Crawford, a summer program for gifted students is the chance of a lifetime. No one else at his high school gets his weird fascinations with history and science, but at the New Hampshire College Prep program, such quirks are all but required. Dan arrives to find that the usual summer housing has been closed, forcing students to stay in the crumbling Brookline dorm – formerly a psychiatric hospital. As Dan and his new friends Abby and Jordan start exploring Brookline’s twisty halls and hidden basement, they uncover disturbing secrets about what really went on here…secrets that link Dan and his friends to the asylum’s dark past. Because it turns out Brookline was no ordinary psych ward. And there are some secrets that refuse to stay buried.

END_OF_DOCUMENT_TOKEN_TO_BE_REPLACED

Tagged Omens, The Outside

END_OF_DOCUMENT_TOKEN_TO_BE_REPLACED

Tagged Aftertime, Dare You To, Delirium, Earth Girl, Fuse, Oath Bound, Omens, Phantom Eyes, Replica, The Girl with the Iron Touch, With All My Soul