END_OF_DOCUMENT_TOKEN_TO_BE_REPLACED

Finished purchasing/pre-ordering January 2009 Releases? Now you can move on to February’s. And if you want to look further into the future (and the past), check my Reading Wishlist. If cover art, summaries or release dates change, ’tis not my fault: I just collect what information is available at the time of compiling this list.

Rachel Vincent
Pride (The Shifters, Book 3)
Harlequin MIRA (US: 1st February 2009) – Mass Market Paperback
Buy (US) Buy (UK) Buy (CA)
I’m on trial for my life. Accused of infecting my human ex-boyfriend – and killing him to cover up the crime. I’m not guilty. But tell that to the panel of Alphas sitting in judgement. Infecting a human is one of three capital offences recognised by the Pride – along with murder and disclosure of our existence to a human. I’m two for three. A goner. On top of that, Marc is in danger of being tossed from the Pride, then we discovered a rogue stray terrorising the mountainside, hunting a wild teenage tabbycat. I think I can protect her from both the ambitious rogue and the scheming of the territorial council. If I survive my own trial…

Richelle Mead
Succubus Dreams (Georgina Kincaid, Book 3)
Random House Bantam (AU: 2nd February 2009) – Paperback
Buy (US) Buy (UK) Buy (CA)
Some days, a girl just can’t catch a break…especially when the girl in question is Georgina Kincaid, a shape-shifting succubus who gets her energy from seducing men. First there’s her relationship with gorgeous bestselling writer Seth Mortensen, which is unsatisfying on a number of levels. It’s not just that they can’t have sex in case Georgina inadvertently kills him (generally a turn-off for most guys). Lately, even spending time together is a challenge. Seth’s obsessed with finishing his latest novel, and Georgina’s under demonic orders to mentor the new (and surprisingly inept) succubus on the block. Then there are the dreams. Someone, or something, is preying on Georgina at night, draining her energy, and supplying eerie visions of her future. Georgina seeks answers from Dante, a dream interpreter with ties to the underworld, but his flirtatious charm only leaves her more confused – especially as the situation with Seth reaches crisis point. Now Georgina faces a double challenge – rein in her out-of-control love life, and go toe-to-toe with an enemy capable of wreaking serious havoc among mankind. Otherwise, Georgina, and the entire mortal world, may never sleep easy again.

Anya Bast
Taken
Samhain (3rd February 2009) – eBook
Buy
Anne’s morning starts like any other normal day – and ends in a race for her life. The surprise that interrupts her regular date with a latte looks a lot like Frankenstein, except this monster is for real. And it chases her straight into the arms of two mouth-watering hunks who whisk her away from everything she knows. That would be Earth. Suddenly life isn’t so normal anymore. Caleb and Van have been watching Anne for several weeks. Women are scarce in their world, a situation that sometimes forces two or more males to share one wife between them. Anne is their perfect match. Now all they have to do is convince her of that – while trying desperately not to let their intense desire for her scare her away. Then there’s the little matter of protecting her from the Guardians, who want to make sure no match is ever made…

Rachel Caine
Undone (Outcast Season, Book 1)
Penguin Roc (US & CA: 3rd February 2009) – Mass Market Paperback
Buy (US) Buy (UK) Buy (CA)
Once she was Cassiel, a Djinn of limitless power. Now, she has been reshaped in human flesh as punishment for defying her master – and living among the Weather Wardens, whose power she must tap into regularly or she will die. And as she copes with the emotions and frailties of her human condition, a malevolent entity threatens her new existence…

Kelley Armstrong
Men of the Otherworld (Otherworld, Anthology)
Hachette Orbit (UK & AU: 5th February 2009) – Paperback
Buy (US) Buy (UK) Buy (CA)
As a curious and independent six-year-old, Clayton didn’t resist the bite – he asked for it. But as a lone child werewolf his life is under constant threat. So when enigmatic Pack member Jeremy Danvers saves him, Clayton is determined to protect his adoptive father, no matter what the cost. So begins this gripping collection of four tales chronicling the bloody feuds of the American Pack, and the coming of age of Clay Danvers, a very powerful – and very singular – werewolf.

Kim Harrison
White Witch, Black Curse (The Hollows, Book 7)
HarperCollins Eos (CA: 11th February 2009; US: 24th February 2009) – Hardcover
Buy (US) Buy (UK) Buy (CA)
Rachel Morgan, kick-ass witch and bounty hunter, has taken her fair share of hits, and has broken lines she swore she would never cross. But when her lover was murdered, it left a deeper wound than Rachel ever imagined, and now she won’t rest until his death is solved…and avenged. Whatever the cost. Yet the road to hell is paved with good intentions, and when a new predator moves to the apex of the Inderlander food chain, Rachel’s past comes back to haunt her. Literally.

Trisha Telep (ed.)
The Mammoth Book of Paranormal Romance
Robinson (UK: 12th February 2009) – Paperback
Buy (US) Buy (UK) Buy (CA)
Paranormal romance is now a supernatural force to be reckoned with. From some of the biggest names in the field, here are over 25 tales to take you away from life ordinary. Contributors includes the likes of Karen Chance, J. R. Ward, Lilith Saintcrow, Sherrilyn Kenyon, Caitlin R. Kiernan, Keri Arthur. The stories cover the full range of paranormal romance themes, including werewolves (and weregirls), vampires, shape-shifters, time travel, fiery mages, and fae. From lycanthropic love triangles, and shape-shifters struggling with new powers, to mercenaries who have to clean up after magic has gone wrong, and whole paranormal worlds rent into good and evil factions, it’s all here! 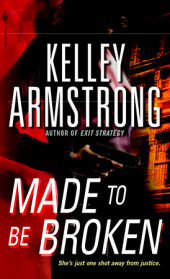 Kelley Armstrong
Made to be Broken (Nadia Stafford, Book 2)
Random House (US & CA: 24th February 2009) – Paperback
Buy (US) Buy (UK) Buy (CA)
Nadia Stafford isn’t your typical nature lodge owner. An ex-cop with a legal code all her own, she’s known only as “Dee” to her current employer: a New York crime family that pays her handsomely to bump off traitors. But when Nadia discovers that a troubled teenage employee and her baby have vanished in the Canadian woods, the memory of a past loss comes back with a vengeance and her old instincts go into overdrive. With her enigmatic mentor, Jack, covering her back, Nadia unearths sinister clues that point to an increasingly darker and deadlier mystery. Now, with her obsession over the case deepening, the only way Nadia can right the wrongs of the present is to face her own painful ghosts – and either bury them for good, or die trying. Because in her book everyone deserves a chance. And everyone deserves justice.

Mark Henry
Road Trip of the Living Dead (Amanda Feral, Book 2)
Kensington (US: 24th February 2009) – Trade Paperback
Buy (US) Buy (UK) Buy (CA)
Celebrity party girl Amanda Feral is back from the dead, and hungrier than ever for a good time. With her zombie gal pal Wendy and vampy gay sidekick Gil, this stone cold fox is dressed to kill, on the prowl, and ready to take a big juicy bite out of Seattle’s supernatural nightlife. But what’s a zombie chick to do when her “Mommie Dearest” gets sick? If you’re Amanda Feral, you can either ignore the wicked old witch – or bury the past by visiting Ethel before she kicks it. Amanda’s not thrilled about the idea of crossing three states just to be criticised. But Wendy, who’s always looking for fresh meat, is up for the adventure. And Gil, who just launched his “luxury” resurrection business, needs to disappear because a pissed-off client is out for his blood. First, they pack their stiletto pumps and plasma into a skeevy rattrap on wheels that used to be a Winnebago. Then, with a little help from a Korean-ghost hood ornament, a masochist named Fishhook, and a slew of “moderately accurate” psychics, they hit the highway – their way. Of course, they’ll have to navigate past some neo-Nazi skinheads, a horny dust devil, a hunky werewolf cop (who could pass for an underwear model) and an unsightly horde of Kmart shoppers. But for this glamorous gang of ghouls this trip is about to take a dangerous detour that could give road kill a brand new meaning…

Richelle Mead
Vampire Academy (Vampire Academy, Book 1)
Penguin Puffin (UK: 26th February 2009) – Paperback
Buy (US) Buy (UK) Buy (CA)
St Vladimir’s Academy isn’t just any boarding school – it’s a hidden place where vampires are educated in the ways of magic and half-human teens train to protect them. Rose Hathaway is a Dhampir, a bodyguard for her best friend Lissa, a Moroi Vampire Princess. They’ve been on the run, but now they’re being dragged back to St Vladimir’s – the very place where they’re most in danger…Rose and Lissa become enmeshed in forbidden romance, the Academy’s ruthless social scene, and unspeakable night-time rituals. But they must be careful lest the Strigoi – the world’s fiercest and most dangerous vampires – make Lissa one of them forever.

Tagged Jailbait Zombie, Second Skin, You Are So Undead to Me

It’s July 6th – Mario Acevedo’s birthday. He’s a top bloke who shares the Biting Edge blog with Jeanne C. Stein – what I love about it is they blog about stuff that others aren’t blogging about. Anyway, give Mar (can I call you Mars?) the gift of royalties by buying/pre-ordering his works:

Because Leah tagged me:

1. I hate the color…yellow
2. I hate the TV show…Mark Loves Sharon (haven’t seen it, but it looks like the biggest pile of wank)
3. I hate the taste of…fresh fish (though canned tuna, crabmeat and whatever’s in fish fingers are still fine)
4. I hate the smell of…fish
5. I hate the word…shizzle
6. I hate the sound of…the kids next door
7. I hate the song…“Soulja Boy”

Oh, and I’ve added more links to my WordPress‘s sidebar. If you want to do a link exchange, I’d be happy to participate.