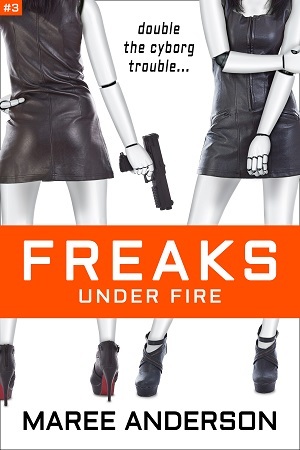 Maree Anderson
Freaks Under Fire (Freaks, Book 3)
Maree Anderson (US: 31st March 2015)
Buy (US) Buy (UK) Buy (CA)
For a cyborg like Jay, life was never going to be simple. Jay’s still reeling from her encounter with a rogue cyborg assassin when she discovers she has a twin – a severely damaged Beta unit. Jay is determined to find the Beta, and help her if she can. Now all she needs to do is convince her boyfriend Tyler that it’s best for him to stay behind. But Jay’s not the only one searching for her twin. With enemies who’ll stop at nothing, and Tyler and his family caught in the crossfire, Jay’s life is about to get a whole lot more complicated…and a whole lot more dangerous.

Kady Cross
Sisters of Blood and Spirit
Harlequin Teen (US: 31st March 2015)
Buy (US) Buy (UK) Buy (CA) Buy (Worldwide)
Wren Noble is dead – she was born that way. Vibrant, unlike other dead things, she craves those rare moments when her twin sister allows her to step inside her body and experience the world of the living. Lark Noble is alive but often feels she belongs in the muted Shadow Lands – the realm of the dead. Known as the crazy girl who talks to her dead sister, she doesn’t exactly fit in with the living, though a recent suicide attempt and time in a psych ward have proved to her she’s not ready to join her sister in the afterlife. Now the guy who saved Lark’s life needs her to repay the favor. He and his friends have been marked for death by the malevolent spirit of a vicious and long-dead serial killer, and the twins – who should know better than to mess with the dead – may be their only hope of staying alive.

Kat Falls
Inhuman
Scholastic (US: 31st March 2015)
Buy (US) Buy (UK) Buy (CA) Buy (Worldwide)
In a world ravaged by mutation, a teenage girl must travel into the forbidden Savage Zone to recover lost artifacts or her father’s life is forfeit. America has been ravaged by a war that has left the eastern half of the country riddled with mutation. Many of the people there exhibit varying degrees of animal traits. Even the plant ife has gone feral. Crossing from west to east is supposed to be forbidden, but sometimes it’s necessary. Some enter the Savage Zone to provide humanitarian relief. Sixteen-year-old Lane’s father goes there to retrieve lost artifacts – he is a Fetch. It’s a dangerous life, but rewarding – until he’s caught. Desperate to save her father, Lane agrees to complete his latest job. That means leaving behind her life of comfort and risking life and limb – and her very DNA – in the Savage Zone. But she’s not alone. In order to complete her objective, Lane strikes a deal with handsome, roguish Rafe. In exchange for his help as a guide, Lane is supposed to sneak him back west. But though Rafe doesn’t exhibit any signs of “manimal” mutation, he’s hardly civilized…and he may not be trustworthy.

Claudia Gabel & Cheryl Klam
Etherworld (Elusion, Book 2)
HarperCollins Katherine Tegen (US & CA: 31st March 2015)
Buy (US) Buy (UK) Buy (CA) Buy (Worldwide)
Elusion® was hailed as an exciting leap in technology – a confectionary, euphoric virtual world of crystal beaches and orange skies – until users began to disappear amid rumors of addiction. At first, Regan Welch refused to believe her father’s invention could be harmful, but her search for the truth led her and her new boyfriend, Josh, to Etherworld, another dimension located behind the program’s firewall, where more shocking secrets about Elusion are finally exposed. Etherworld may be dark and bleak, but to Regan’s surprise, it’s actually a refuge. Her father and others are here for protection from the enticing stimuli of Elusion, but the longer they stay, the less likely they’ll be able to return to the real world. In order to escape they must attack Elusion from within the program, but even if they succeed, Regan and her friends will have to prevent the powerful company that developed Elusion from distributing it to the masses. Regan can only hope that they’ll be able to stop the company before it’s too late, but the danger may have grown beyond anyone’s control.

Tiffany Reisz
The Virgin (The Original Sinners: The White Years, Book 3)
Harlequin MIRA (US: 31st March 2015)
Buy (US) Buy (UK) Buy (CA) Buy (Worldwide)
For years, Kingsley Edge warned Eleanor the day would come when she, the mistress of a well-respected Catholic priest, would have to run. She always imagined if that day came, she’d be running with Søren. Instead, she’s running from him. Fearing Søren and Kingsley will use their power and influence to bring her back, Eleanor takes refuge at the one place the men in her life cannot follow. Behind the cloistered gates of the convent where her mother has taken orders, Eleanor hides from the man she loves and hates in equal measure. With Eleanor gone, the lights have gone out in Kingsley’s kingdom. When he learns the reason she left, he, too, turns his back on Søren and runs. On a beach in Haiti, Kingsley meets Juliette, the one woman who could save him from his sorrows. But only if he can save her first. Eleanor can hide from Søren but she can’t hide from her true nature. A virginal novice at the abbey sends Eleanor down a path of sexual awakening, but to follow this path means leaving her lover behind, a sacrifice Eleanor refuses to make. The lure of the forbidden, the temptation to sin and the price of passion have never been higher, and Eleanor and Kingsley will have to pay it if they ever want to go home again.

Tagged Etherworld, Freaks Under Fire, Inhuman, Sisters of Blood and Spirit, The Virgin