Tag Archives: Ever After

END_OF_DOCUMENT_TOKEN_TO_BE_REPLACED

Allie Brosh
Hyperbole and a Half
Simon & Schuster Touchstone (US & CA: 29th October 2013); Random House Vintage Square Peg (UK: 29th October 2013)
Buy (US) Buy (UK) Buy (CA) Buy (Worldwide)
Stories about life’s mishaps from the creator of the blog ‘Hyperbole and a Half’. Fully illustrated with over 50% new material. Hyperbole and A Half is a blog written by a 20-something American girl called Allie Brosh. She tells stories about the mishaps of her everyday life, with titles like ‘Why Dogs Don’t Understand Basic Concepts Like Moving’ and ‘The God of Cake’. She accompanies these with naive drawings using Paint on her PC. Brosh’s website receives millions of visitors a month and hundreds of thousands of per day. Now her full-colour debut book chronicles the many “learning experiences” Brosh has endured as a result of her own character flaws. It includes stories about her rambunctious childhood; the highs and mostly lows of owning a mentally challenged dog; and an account of her struggles with depression. Think Cyanide and Happiness but with story-lines, cake and dogs.

Mira Grant
Parasite
Hachette Orbit (US & UK: 29th October 2013)
Buy (US) Buy (UK) Buy (CA) Buy (Worldwide)
A decade in the future, humanity thrives in the absence of sickness and disease. We owe our good health to a humble parasite – a genetically engineered tapeworm developed by the pioneering SymboGen Corporation. When implanted, the Intestinal Bodyguard worm protects us from illness, boosts our immune system – even secretes designer drugs. It’s been successful beyond the scientists’ wildest dreams. Now, years on, almost every human being has a SymboGen tapeworm living within them. But these parasites are getting restless. They want their own lives…and will do anything to get them.

Kim Harrison
Ever After (Hollows, Book 11)
HarperCollins Voyager (US & CA: 29th October 2013)
Buy (US) Buy (UK) Buy (CA) Buy (Worldwide)
The ever-after, the demonic realm that parallels our own, is shrinking, and it’s up to witch-turned-daywalking-demon Rachel Morgan to stop it before the fragile balance between Inderlanders and humans falls apart. Of course, there’s also the small fact that Rachel caused the ley line to rip in the first place. And the most powerful demon in the ever-after, the soul-eater Ku’Sox Sha-Ku’ru, has kidnapped her friend and her goddaughter as leverage in his quest for vengeance. If Rachel doesn’t give herself up for execution, they will die. Rachel must team up with elfin tycoon Trent Kalamack – a partnership fraught with perils of the heart and soul – to rescue those she loves.

Nancy Holzner
Hellhound (Deadtown, Book 5)
Penguin Ace (US & CA: 29th October 2013)
Buy (US) Buy (UK) Buy (CA) Buy (Worldwide)
They call it Deadtown: the city’s quarantined section for its inhuman and undead residents. Most humans stay far from its borders – but Victory Vaughn, Boston’s only professional demon slayer, isn’t exactly human… Boston’s zombies have suddenly become inexplicably violent – horror movie-style – resulting in a catastrophic all-out battle against humans. More troubling to Vicky is that she’s had dreams and visions of herself fighting alongside the demons. At least, she hopes they’re just visions – otherwise, that puts her on the front lines of the wrong side of the war. Vicky’s not surprised to discover that Pryce, her demi-demon cousin and loathed adversary, is behind the outbreak of the zombie plague, having formed an unholy pact with the Old Ones. Now, as the violence escalates and alliances shift, Vicky knows she’s the only one who can stop the plague. Unless the pack of hellhounds on her trail finds her first.

Tagged Ever After, Hellhound, Hyperbole and a Half, Parasite

END_OF_DOCUMENT_TOKEN_TO_BE_REPLACED

Tagged A Touch Menacing, Aftertime, Agave Kiss, Black Helicopters, Blood on the Bayou, Bot Wars, Broken, Changeling, Crossed, Death Doom and Detention, Dweller on the Threshold, Ever After, February 2013 Releases, If You Find Me, Impostor, March 2013 Releases, Midnight Blue-Light Special, Mila 2.0, Pretty Girl Thirteen, Rebel Angels, Redemption, The Lost, The Queen is Dead, The Springsweet, The Summer Prince, Twice Tempted, Unremembered, When We Wake, With All My Soul

Tagged A Stranger Thing, Across a Star-Swept Sea, Cold Spell, Ever After, Fuse, Hopeless, Long Live the Queen, Mothership, Once We Were, Renegade, Resist, Revelations, The Coldest Girl in Coldtown, Thornhill 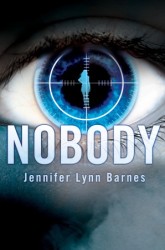 Jennifer Lynn Barnes
Nobody
Random House Egmont (US & CA: 22nd January 2013)
Buy (US) Buy (UK) Buy (CA) Buy (Worldwide)
There are people in this world who are Nobody. No one sees them. No one notices them. They live their lives under the radar, forgotten as soon as you turn away. That’s why they make the perfect assassins. The Institute finds these people when they’re young and takes them away for training. But an untrained Nobody is a threat to their organisation. And threats must be eliminated. Sixteen-year-old Claire has been invisible her whole life, missed by the Institute’s monitoring. But now they’ve ID’ed her and send seventeen-year-old Nix to remove her. Yet the moment he lays eyes on her, he can’t make the hit. It’s as if Claire and Nix are the only people in the world for each other. And they are – because no one else can really see them.

Kim Harrison
Ever After (Hollows, Book 11)
HarperCollins Voyager (US & CA: 22nd January 2013)
Buy (US) Buy (UK) Buy (CA) Buy (Worldwide)
The ever-after, the demonic realm that parallels our own, is shrinking, and if it disappears, so does all magic. It’s up to witch-turned-daywalking-demon Rachel Morgan to fix the ever-after before the fragile balance between magic users and humans falls apart. Of course, there’s also the small fact that Rachel is the one who caused the ley line to rip in the first place, and her life is forfeit unless she can fix it. Not to mention the most powerful demon in the ever-after – the soul-eater Ku’Sox Sha-Ku’ru – has vowed to destroy her, and has kidnapped her friend and her goddaughter as leverage. If Rachel doesn’t give herself up, they will die. Forced by circumstance, Rachel teams up with elven tycoon Trent Kalamack – a partnership fraught with dangers of the heart as well as betrayal of the soul – to return to the ever-after and rescue those she loves. One world teeters on the brink of interspecies war, the other on the brink of its very demise – and it’s up to Rachel to keep them both from being destroyed.

Tagged Ever After, Nobody