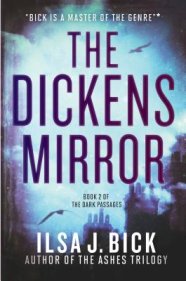 Ilsa J. Bick
The Dickens Mirror (Dark Passages, Book 2)
Random House Egmont (US & CA: 10th March 2015)
Buy (US) Buy (UK) Buy (CA) Buy (Worldwide)
Emma Lindsay finds herself with nowhere to go, no place to call home. Her friends are dead. Eric, the perfect boy she wrote into being, and his brother, Casey, are lost to the Dark Passages. With no way of knowing where she belongs, she commands the cynosure, a beacon and lens that allows for safe passage between the Many Worlds, to put her where she might find her friends – find Eric – again. What she never anticipated was waking up in the body of Little Lizzie, all grown up – or that, in this alternative London, Elizabeth McDermott is mad. In this London, Tony and Rima are “rats,” teens who gather the dead to be used for fuel. Their friend, Bode, is an attendant at Bedlam, where Elizabeth has been committed after being rescued by Arthur Conan Doyle, a drug-addicted constable. Tormented by the voices of all the many characters based on her, all Elizabeth wants is to get rid of the pieces under her skin once and for all. While professing to treat Elizabeth, her physician, Dr. Kramer, has actually drugged her to allow Emma – who’s blinked to this London before – to emerge as the dominant personality…because Kramer has plans. Elizabeth is the key to finding and accessing the Dickens Mirror. But Elizabeth is dying, and if Emma can’t find a way out, everyone as they exist in this London, as well as the twelve-year-old version of herself and the shadows – what remains of Eric, Casey, and Rima that she pulled with her from the Dark Passages – will die with her.

Lauren DeStefano
Perfect Ruin (Internment Chronicles, Book 2)
Simon & Schuster (US & CA: 10th March 2015)
Buy (US) Buy (UK) Buy (CA) Buy (Worldwide)
Morgan Stockhour knows getting too close to the edge of Internment, the floating city and her home, can lead to madness. Even though her older brother, Lex, was a Jumper, Morgan vows never to end up like him. There’s too much for her on Internment: her parents, best friend Pen, and her betrothed, Basil. Her life is ordinary and safe, even if she sometimes does wonder about the ground and why it’s forbidden. Then a murder, the first in a generation, rocks the city. With whispers swirling and fear on the wind, Morgan can no longer stop herself from investigating, especially once she meets Judas. Betrothed to the victim, Judas is being blamed for the murder, but Morgan is convinced of his innocence. Secrets lay at the heart of Internment, but nothing can prepare Morgan for what she will find – or whom she will lose.

Lauren DeStefano
Burning Kingdoms (Internment Chronicles, Book 2)
Simon & Schuster (US & CA: 10th March 2015)
Buy (US) Buy (UK) Buy (CA) Buy (Worldwide)
After escaping Internment, Morgan and her fellow fugitives land on the ground to finally learn about the world beneath their floating island home. The ground is a strange place where water falls from the sky as snow, and people watch moving pictures and visit speakeasies. A place where families can have as many children as they want, their dead are buried in vast gardens of bodies, and Internment is the feature of an amusement park. It is also a land at war. Everyone who fled Internment had their own reasons to escape their corrupt haven, but now they’re caught under the watchful eye of another king who wants to dominate his world. They may have made it to the ground, but have they dragged Internment with them?

Francesca Haig
The Fire Sermon (The Fire Sermon, Book 1)
Simon & Schuster Gallery (US & CA: 10th March 2015)
Review
Buy (US) Buy (UK) Buy (CA) Buy (Worldwide)
Four hundred years in the future, the Earth has turned primitive following a nuclear fire that has laid waste to civilization and nature. Though the radiation fallout has ended, for some unknowable reason every person is born with a twin. Of each pair, one is an Alpha – physically perfect in every way; and the other an Omega – burdened with deformity, small or large. With the Council ruling an apartheid-like society, Omegas are branded and ostracized while the Alphas have gathered the world’s sparse resources for themselves. Though proclaiming their superiority, for all their effort Alphas cannot escape one harsh fact: Whenever one twin dies, so does the other. Cass is a rare Omega, one burdened with psychic foresight. While her twin, Zach, gains power on the Alpha Council, she dares to dream the most dangerous dream of all: equality. For daring to envision a world in which Alphas and Omegas live side-by-side as equals, both the Council and the Resistance have her in their sights.

Megan Hart
Don’t Deny Me
Macmillan St. Martin’s Griffin (US: 10th March 2015)
Buy (US) Buy (UK) Buy (CA)
Alice and Mick had it all: the happy days, the heartfelt evenings, the hot, slow nights. Mick knew she was too much, too good, more than he deserved…and when Mick couldn’t give her what she needed, in a moment of crisis, they lost everything. Torn apart, Alice tries to pry him out of her life and move on – until a not-so-chance meeting at an old friend’s party brings them face-to-face once more. Now they’re talking again, Alice can’t escape the burning in her chest whenever he’s near, the way his eyes still follow her around the room…but she won’t repeat the mistakes of her past. Because people, and relationships, can’t really ever change. But if Alice does decide to let him back into her heart – and into her bed – will Mick be ready to show her the man that he’s become…and take a chance on love? And can Alice ever trust him again?

Lisa Heathfield
Seed
Running Press (US: 10th March 2015)
Buy (US) Buy (UK) Buy (CA) Buy (Worldwide)
All that Pearl knows can be encapsulated in one word: Seed. It is the isolated community that she was born into. It is the land that she sows and reaps. It is the center of her family and everything that means home. And it is all kept under the watchful eye of Papa S. At fifteen years old, Pearl is finally old enough to be chosen as Papa S.’s companion. She feels excitement…and surprising trepidation that she cannot explain. The arrival of a new family into the Seed community – particularly the teenage son, Ellis – only complicates the life and lifestyle that Pearl has depended upon as safe and constant. Ellis is compelling, charming, and worldly, and he seems to have a lot of answers to questions Pearl has never thought to ask. But as Pearl digs to the roots of the truth, only she can decide what she will allow to come to the surface.

Colleen Hoover
Confess
Simon & Schuster Atria (US, UK, CA, & AU: 10th March 2015)
Buy (US) Buy (UK) Buy (CA) Buy (Worldwide)
At age twenty-one, Auburn Reed has already lost everything important to her. In her fight to rebuild her shattered life, she has her goals in sight and there is no room for mistakes. But when she walks into a Dallas art studio in search of a job, she doesn’t expect to find a deep attraction to the enigmatic artist who works there, Owen Gentry. For once, Auburn takes a chance and puts her heart in control, only to discover that Owen is keeping a major secret from coming out. The magnitude of his past threatens to destroy everything important to Auburn, and the only way to get her life back on track is to cut Owen out of it. To save their relationship, all Owen needs to do is confess. But in this case, the confession could be much more destructive than the actual sin.

Peggy Kern
Little Peach
HarperCollins Balzer + Bray (US & CA: 10th March 2015)
Buy (US) Buy (UK) Buy (CA) Buy (Worldwide)
What do you do if you’re in trouble? When Michelle runs away from her drug-addicted mother, she has just enough money to make it to New York City, where she hopes to move in with a friend. But once she arrives at the bustling Port Authority, she is confronted with the terrifying truth: she is alone and out of options. Then she meets Devon, a good-looking, well-dressed guy who emerges from the crowd armed with a kind smile, a place for her to stay, and eyes that seem to understand exactly how she feels. But Devon is not who he seems to be, and soon Michelle finds herself engulfed in the world of child prostitution, where he becomes her “Daddy” and she his “Little Peach.” It is a world of impossible choices, where the line between love and abuse, captor and savior, is blurred beyond recognition.