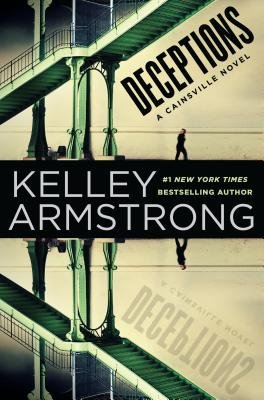 Kelley Armstrong
Deceptions (Cainsville, Book 3)
Penguin Dutton (US: 18th August 2015); Hachette Little, Brown Sphere (UK & AU: 18th August 2015); Random House (CA: 18th August 2015)
Review
Buy (US) Buy (UK) Buy (CA) Buy (Worldwide)
When Olivia’s life exploded – after she found out she was not the only child of a privileged Chicago family, but of a notorious pair of serial killers – she found a refuge in the oddly secluded but welcoming town of Cainsville, Illinois. Working with Gabriel Walsh, a precociously successful criminal lawyer with links to the town, she managed to partially clear her parents’ name in an investigation that also revealed darker forces at work in the town that had offered her a haven. Fleeing Cainsville after she is almost killed, Olivia finds herself not only the target of the Cainsville elders and of the Huntsmen, but also of her ex-fiancé, James, who stalks her and even tries to have her kidnapped. All this as her feelings for Ricky deepen, and confusingly her feelings for Gabriel too. Visions continue to haunt her: particularly a little blond girl in a green sundress who insists she has an important message for Olivia, and holds out in her palm a black stone and a white stone that swirl together to create a balance of light and dark. Death stalks them all, as Olivia desperately searches to understand whether ancient scripts are dictating the triangle that links her to Gabriel and Ricky, or whether she has the power to change the tragic outcome.

Phoebe North
Starbreak (Starglass, Book 2)
Simon & Schuster (US & CA: 18th August 2015)
Buy (US) Buy (UK) Buy (CA) Buy (Worldwide)
The Asherah has finally reached Zehava, the long-promised planet. There, Terra finds harsh conditions and a familiar foe – Aleksandra Wolff, leader of her ship’s rebel forces. As Terra and Aleksandra lock horns about how best to reach the alien city, they encounter violent beasts – and dangerous hunters. It’s only when they’re taken to the city as prisoners that Terra finally discovers Vadix, the boy who has haunted her dreams. But Vadix has a dark past of his own, and Aleksandra is intent on using violence to lead their tiny band to freedom. When the rebel leader gets humanity expelled from the planet, it’s up to Terra, with Vadix by her side, to unite her people – and to forge an alliance with the alien hosts, who want nothing more than to see humanity gone forever.

Alexandra Sirowy
The Creeping
Simon & Schuster (US, UK, CA, & AU: 18th August 2015)
Buy (US) Buy (UK) Buy (CA) Buy (Worldwide)
Twelve years ago Stella and Jeanie vanished while picking strawberries. Stella returned minutes later, with no memory of what happened. Jeanie was never seen or heard from again. Now Stella is seventeen, and she’s over it. She’s the lucky one who survived, and sure, the case is still cloaked in mystery – and it’s her small town’s ugly legacy – but Stella is focused on the coming summer. She’s got a great best friend, a hook-up with an irresistibly crooked smile, and two months of beach days stretching out before her. Then along comes a corpse, a little girl who washes up in an ancient cemetery after a mudslide, and who has red hair just like Jeanie did. Suddenly memories of that haunting day begin to return, and when Stella discovers that other red-headed girls have gone missing as well, she begins to suspect that something sinister is at work. And before the summer ends, Stella will learn the hard way that if you hunt for monsters, you will find them.

Some booksellers have mistakenly listed Kelley Armstrong’s Cainsville series as a trilogy, but rest assured that Books 4 and 5 are scheduled for publication. Being the third book, Deceptions has a bit of Middle Book Syndrome – it answers some questions, but others dangle.

We find out how Ricky Gallagher is linked to the plot, which is a relief because I wondered in Visions if he was just included as a love rival. (Bikers being all the rage in romance at the moment…) Mind you, the motorcycle club element is the weakest part of the novel. Olivia Taylor-Jones notes the sexist nature, yet submits to going along to the club and being “handed off” to minders while Ricky has a meeting. Olivia (*cringe*) gets into a girl-fight, and then has to fight off a guy. In other words, that “alpha-hole” environment is just as stereotypically bad as I expected.

Another questionable plot element involves “roles”. Some people may enjoy fate as a trope, but it doesn’t work for me, and it reinforces the love triangle.

Also, the paparazzi are included just to create more trouble at the funeral, but are conveniently absent during the outdoor sex scenes. (There are a few. Seriously, I expected the paparazzi to follow Olivia all the time.)

Even though these are my quibbles, Deceptions is a high-quality page-turner that may be slow to start but builds to a big finale (with a rather convenient rescue that I didn’t quite believe). The characterisation is thorough, the psychiatric care facility is fascinating, and the piece-by-piece reveals are handled well. It’s a solid read, and I’m very much looking forward to Book 4.