Tag Archives: Captivated by You

[REVIEW] Captivated by You – Sylvia Day

Having grown up reading crime novels, I’m accustomed to the occasional point-of-view from the creepy guy. In the case of Sylvia Day’s Captivated by You, the creepy guy’s POV is every odd-numbered chapter. Yes, half the entire novel is narrated by the creepy guy…who is supposedly the “hero”. And this is supposedly a “romance”.

Everyone reads subjectively, so what works for some readers may not work for others. But you know which category Gideon Cross and Eva Tramell fall into for me.

I’ve heard the author talk about how the Crossfire concept came along: a statistic regarding abuse survivors; that they often end up in relationships with each other. (As for the rest of the series…if I remember correctly, E. L. James is named in the dedication/acknowledgments for Bared to You. That explains a lot of problematic shiz in this series.)

I’m fed up with this new trend of book summaries written in the first-person and saying pretty much nothing about the plot. (It’s not just this series – I noticed it with J. Kenner’s Stark trilogy, too.) But I guess it’s honest advertising, when you read the novel and realise that there’s not much of a plot.

Let me save you 357 pages: Gideon and Eva’s engagement goes public (even though they’re secretly married), Gideon sees threats to their relationship everywhere, and Gideon keeps everything secret from Eva in order to “protect” her (or some shiz). Meanwhile, Eva realises her true calling: to help abuse survivors. Conveniently, Gideon’s business includes a foundation for that, so he offers Eva’s boss a job with him, hoping Eva will come along.

Eva has put up with a lot of Gideon’s faff, but she finally stands up for herself in this instance, and doesn’t let him off easy for potentially rendering her unemployed. It’s here, in the last third of the book, where the novel actually has a story and Eva asserts herself as being something other than Gideon’s doormat. She actually WANTS independence, including a life outside of Gideon, with HER friends, and work at a business that HE doesn’t own.

Gideon, meanwhile, already has his independence, and seems intent on keeping Eva from hers. And my word, he’s so freaking annoying for most of the book. He’s definitely psychologically abusive (trying to keep her from friends, trying to force her into working for him), and borderline sexually abusive, too (see the bottom half of page 9, and part of Chapter 14).

She stiffened and pushed at me, rejecting me. “Gideon, no…” […]
She struggled and I growled, “Don’t fight me.” […]
“Let me go.” She rolled onto her stomach.
My arms banded around her hips when she tried to crawl away.

Also, Gideon victim-blames Eva’s friend. Megumi was in a bad relationship, got out, and reluctantly returned, hoping the guy had changed. Instead, he becomes more abusive and harassing.

“Sounds like bad judgment all around,” I said. “One of them should’ve known what they were doing.”

“She broke it off, and then took him back. He might not realize she’s serious this time.” […] “I don’t have the whole story…”

To his credit, Gideon begins to speak openly with his therapists, and realise that even Eva needs at least some degree of independence. But this comes far too late in the novel. Instead, most of the book is filled with repetitive shiz: “I love you more”, “I need you more”, “you’re the sexiest”, “YOU’re the sexiest”… Those scenes have absolutely no conflict, and don’t move the story forward. They don’t assist with characterisation, either, so they’re purely filler. Speaking of, that karaoke chapter is just terrible. Note: name-checking songs and musicians doesn’t make you cool – it ages your book, and I judge you for your song choices 😉

I intend to read Book 5, Only with You, whenever it may be published. (I imagine it’ll have the same shoddy scheduling as this book – the release date only announced when the manuscript’s sent to the printers. For other authors and novels, their publication dates are announced whilst they’re still revising/copyediting.)

Credit to Sylvia Day: she’s created a series that makes me FEEL. Makes me feel ANGRY, but that’s better than feeling meh about it, right? If you want to yell at characters, you’ve come to the right book.

Sylvia Day
Captivated by You (Crossfire, Book 4)
Penguin (US & CA: 18th November 2014)
Buy (US) Buy (UK) Buy (CA) Buy (Worldwide)
Gideon calls me his angel, but he’s the miracle in my life. My gorgeous, wounded warrior, so determined to slay my demons while refusing to face his own. The vows we’d exchanged should have bound us tighter than blood and flesh. Instead they opened old wounds, exposed pain and insecurities, and lured bitter enemies out of the shadows. I felt him slipping from my grasp, my greatest fears becoming my reality, my love tested in ways I wasn’t sure I was strong enough to bear. At the brightest time in our lives, the darkness of his past encroached and threatened everything we’d worked so hard for. We faced a terrible choice: the familiar safety of the lives we’d had before each other or the fight for a future that suddenly seemed an impossible and hopeless dream… 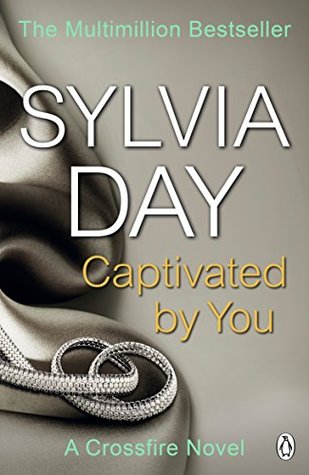 Bared to You was originally self-published, before Penguin bought it in a three-book deal. Then the contract was extended to five books. Book 4, Captivated by You hits stores on November 18th (November 19th in Australia, and later in foreign-language territories).

Don’t have time to re-read the first three novels to get up to speed? Lucky for you, my reviews for them were rather spoilery – and more than a little snarky, truth be told. Reader, beware when visiting the below links:

Bared to You
Reflected in You
Entwined with You

Or if you’d prefer to actually read the BOOKS, you can do that, too:

You may have noticed the categories in which Bared to You is a bestseller*:

*(Those numbers were correct at the time I copied-and-pasted that from the Kindle Edition at Amazon.)

Though marketed as romance, I think this series fits better with psychological suspense. For a romance novel to really work, the reader has to WANT the “hero” and “heroine” to live and love together happily ever after. But I DON’T want Gideon and Eva to end up together, because they bring out the worst in each other.

END_OF_DOCUMENT_TOKEN_TO_BE_REPLACED

Tagged Blood of an Ancient, Captivated by You, Embers, Hunting the Dark, Into the Shadows, Rebellion, Revelations, Sex & Violence, The Cage, Torn, Undertow

END_OF_DOCUMENT_TOKEN_TO_BE_REPLACED

Tagged Captivated by You, Hold Me Like a Breath, The Ruby Circle, The Virgin