Adele’s list may be YA only, but I’m including all age brackets. Oh, and these aren’t all published in 2010 – I just read them in 2010. Better late than never 😉

Anyhoo, here we are, counting down from 5 to 1 – yes, I do play favourites:

END_OF_DOCUMENT_TOKEN_TO_BE_REPLACED

Tagged Bloody Maria, Blue Diablo, Death Sentence, Devil's Punch, Execution, Fugitives, Hell Fire, If I Die, Life As We Knew It, Lockdown, My Soul to Keep, My Soul to Save, My Soul to Steal, My Soul to Take, Shady Lady, Solitary, The City of Ember, The Dead and the Gone, The Diamond of Darkhold, The People of Sparks, The Prophet of Yonwood, This World We Live In

I really love that Blue Diablo starts off in Mexico. Of course, I would’ve preferred the entire novel to be set there, but I’m greedy 😉 Seriously, non-US locations seem few and far between in urban fantasy, so Mexico is most welcome. And even the parts set in America are fresh and memorable because the author stays away from the big cities, and instead focuses on shady border towns with true grit.

Chance is distinctive, a love interest that I actually like. (Believe me, that’s rare – most love interests tend to be alpha-douchebags.) Supporting characters Chuch and Eva are charming, though I don’t care for the dog. And Kel Ferguson is well-written in that he’s all shades of grey. Jesse Saldana is kind of set up as a love interest, but I hope he isn’t – I’m Team Chance!

Blue Diablo is a winner with its shady border towns, nifty supporting characters, mysterious pasts, and a protagonist who thinks with more than just her libido. Ann Aguirre writes urban fantasy as it should be!

END_OF_DOCUMENT_TOKEN_TO_BE_REPLACED

US cover for Laurell K. Hamilton’s Flirt. And because it’s huge, here’s the link to the UK cover for Ann Aguirre’s Blue Diablo.

Done with purchasing March 2009 Releases? Now you can move onto April’s:

Jennifer Lynn Barnes
Fate (Bailey Morgan, Book 2)
Random House (AU: 1st April 2009)
Buy (US) Buy (UK) Buy (CA)
It’s been a year since Bailey, Delia, Annabelle, and Zo bought a set of enchanted temporary tattoos at the mall, and life is proceeding as usual. Almost. As the third Fate, Bailey has the lives of the world in her hands, and even though she’s gotten used to weaving lives, she’s not at all prepared when her own life – and the lives of her friends – take some unexpected turns. Delia sets out on a crusade to find a geeky boyfriend, and for the first time in her life, she finds herself being turned down. Meanwhile, Zo’s mother reappears after a twelve-year absence, and Bailey, suddenly immersed in a world in which the Furies are catty Sidhe teenagers and Aphrodite, the Love Sidhe has a strange obsession with Annabelle, is helpless to get her friends’ lives back on track. But when Aphrodite possesses Annabelle, the friends must set aside their individual problems and work together to save their world – and their friend – once more.

Keri Arthur
Deadly Desire (Riley Jenson, Book 7)
Hachette Piatkus (UK & AU: 2nd April 2009)
Buy (US) Buy (CA)
Guardian Riley Jenson always seems to face the worst villains. And this time’s no different. For it’s no ordinary sorceress who can raise the dead to do her killing. But that’s exactly what Riley expects to find at the end of a trail of female corpses used – and discarded – in a bizarre ritual of evil. With pressure mounting to catch the fiend, the last thing Riley needs is the heat of the upcoming full moon bringing her werewolf hormones to a boil – or the reappearance of a sexy bounty hunter, the rogue wolf Kye Murphy. Riley has threatened Murphy with arrest if he doesn’t back off the investigation, but it’s Riley who feels handcuffed by Kye’s lupine charm. Torn between her vamp and wolf natures, between her love for Quinn and her attraction to Kye, Riley knows she’s courting danger and indulging the deadliest desires. For her hunt through the supernatural underworld will bring her face-to-face with what lurks in a darkness where even monsters fear to tread.

Ann Aguirre
Blue Diablo (Corine Solomon, Book 1)
Penguin Roc (US & CA: 7th April 2009)
Buy (US) Buy (UK) Buy (CA)
Eighteen months ago, Corine Solomon crossed the border to Mexico City, fleeing her past, her lover, and her “gift”. Corine, a handler, can touch something and know its history – and sometimes, its future. Using her ability, she can find the missing – and that’s why people never stop trying to find her. People like her ex, Chance… Chance, whose uncanny luck has led him to her doorstep, needs her help. Someone dear to them both has gone missing in Laredo, Texas, and the only hope of finding her is through Corine’s gift. But their search may prove dangerous as the trail leads them into a strange dark world of demons and sorcerers, ghosts and witchcraft, zombies – and black magic…

Kelley Armstrong
The Awakening (Darkest Powers, Book 2)
HarperCollins (US: 28th April 2009); Random House Doubleday (CA: 28th April 2009)
Buy (US) Buy (UK) Buy (CA)
If you had met me a few weeks ago, you probably would have described me as an average teenage girl – someone normal. Now my life has changed forever and I’m as far away from normal as it gets. A living science experiment – not only can I see ghosts, but I was genetically altered by a sinister organisation called the Edison Group. What does that mean? For starters, I’m a teenage necromancer whose powers are out of control; I raise the dead without even trying. Trust me, that is not a power you want to have. Ever. Now I’m running for my life with three of my supernatural friends – a charming sorcerer, a cynical werewolf, and a disgruntled witch – and we have to find someone who can help us before the Edison Group finds us first. Or die trying. 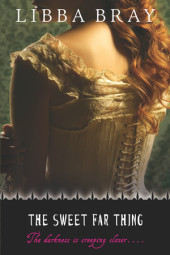 Libba Bray
The Sweet Far Thing (Gemma Doyle, Book 3)
Random House Delacorte (US & CA: 28th April 2009)
Buy (US) Buy (UK) Buy (CA)
It has been a year of change since Gemma Doyle arrived at the foreboding Spence Academy. Her mother murdered, her father a laudanum addict, Gemma has relied on an unsuspected strength and has discovered an ability to travel to an enchanted world called the realms, where dark magic runs wild. Despite certain peril, Gemma has bound the magic to herself and forged unlikely new alliances. Now, as Gemma approaches her London debut, the time has come to test these bonds. The Order – the mysterious group her mother was once part of – is grappling for control of the realms, as is the Rakshana. Spence’s burned East Wing is being rebuilt, but why now? Gemma and her friends see Pippa, but she is not the same. And their friendship faces its gravest trial as Gemma must decide once and for all what role she is meant for.