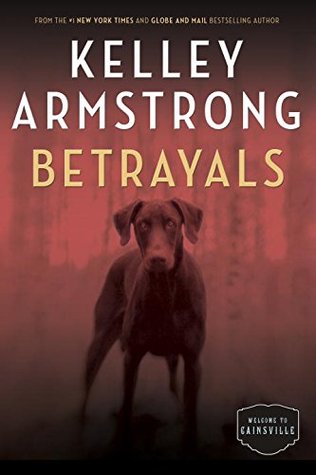 Kelley Armstrong
Betrayals (Cainsville, Book 4)
Random House (US & CA: 9th August 2016)
Buy (US) Buy (UK) Buy (CA) Buy (Worldwide)
When Olivia’s life exploded – after she found out she was not the adopted child of a privileged Chicago family but of a notorious pair of convicted serial killers – she found a refuge in the secluded but oddly welcoming town of Cainsville, Illinois. Working with Gabriel Walsh, a fiendishly successful criminal lawyer with links to the town, she discovered the truth about her parents’ crimes in an investigation that also revealed the darker forces at work in the place that had offered her a haven. As if that wasn’t enough, she also found out that she, Gabriel and her biker boyfriend Ricky were not caught in an ordinary sort of love triangle, but were hereditary actors in an ancient drama in which the elders of Cainsville and the mysterious Huntsmen who opposed them had a huge stake. Now someone is killing street kids in the city, and the police have tied Ricky to the crimes. Setting out with Gabriel’s help to clear Ricky’s name, Olivia once again finds her life at risk. Soon the three are tangled in a web of betrayals that threatens their uneasy equilibrium and is pushing them toward a hard choice: either they fulfil their destinies by trusting each other and staying true to their real bonds, or they succumb to the extraordinary forces trying to win an eternal war by tearing them apart.

END_OF_DOCUMENT_TOKEN_TO_BE_REPLACED

Lili St. Crow
Betrayals (Strange Angels, Book 2)
Penguin Razorbill (US, CA & AU: 17th November 2009); Quercus (UK: 1st December 2009)
Buy (US) Buy (UK) Buy (CA) Buy (Worldwide)
Dru Anderson’s mother was killed, and now Dru’s being hunted. The Schola is supposed to keep her safe, but in a place full of djamphir and werwulfen, “safe” is a relative term – especially considering there’s an unknown traitor in the midst. Meanwhile, Dru’s own powers are getting closer to “blooming”, and she’s been betrayed so many times she can no longer trust anyone – especially not herself.

The featured creatures in Betrayals are intriguingly disturbing, and bloody well creative, particularly the Broken. The lashings of Romanian words and phrases are deliciously exotic, and definitely welcome. I don’t understand some things Christophe Reynard says, though, likely because Dru doesn’t know, either. And the book would be easier to follow if it came with a glossary. There are some terms, and differences between them, that I don’t quite understand, and a handy guide would be appreciated. eg. svetocha; differences between djamphir, nosferatu and Kouroi; differences between werwulfen and loup-garou; etc. I’m still not sure to what the Strange Angels series title is referring, and I’d guess the Ravelle, only they barely get a look-in here.

P.S. Two thoughts Dru has in relation to Graves make me feel uncomfortable: A flush crept up into his sallow cheeks. Under the Asian coloring he could really change it up. Also, Knelt down carefully, and I could see how pale he was under his ethnic coloring. I may be overly PC, but these comments don’t quite sit well with me. Then again, I’m white trash so my knowledge of race relations is probably lacking.

FTC Advisory: The Australian publisher provided me with an early copy of Betrayals in exchange for an unbiased review. No sponsorships or bribes were involved. If you click and order via the Buy links, I receive a tiny affiliate fee, and rarely generate enough to actually use the fee to spend on Amazon products. And not just because of the frightful cost of international postage.

Done buying September 2009 Releases? Now time for October’s list, with books from the US, Canada, UK and Australia. As always, I don’t include anything – just the ones I’ve heard of and am interested in. Covers and release dates are subject to change, so if I’m wrong, blame my sources 😉

END_OF_DOCUMENT_TOKEN_TO_BE_REPLACED

6 new-to-me covers behind the cut. Since I don’t really read any book blogs anywhere, I apologise in advance if you’ve seen these elsewhere. And the books are:

END_OF_DOCUMENT_TOKEN_TO_BE_REPLACED

Tagged Betrayals, The Dead-Tossed Waves, This World We Live In