Tag Archives: Before I Wake

END_OF_DOCUMENT_TOKEN_TO_BE_REPLACED

Kelley Armstrong
Spell Bound (Otherworld, Book 12)
Penguin Plume (US: 26th June 2012)
Buy (US) Buy (UK) Buy (CA) Buy (Worldwide)
Savannah Levine is in terrible danger, and for once she’s powerless to help herself. Savannah swore that she would give up her powers if it would help a young girl. Little did she know that someone would take her up on that promise. And now, witch-hunting assassins, necromancers, half-demons and rogue witches all seem to be after her. The threat is not just for Savannah; every member of the Otherworld might be at risk. While most of her fellow supernaturals are circling the wagons at a gathering of the council in Miami, Savannah is caught on the road, isolated from those who can protect her and unable to use her vast spell-casting talent, the thing she counts on most.

Keri Arthur
Darkness Devours (Dark Angel, Book 3)
Penguin Signet (US & CA: 26th June 2012)
Buy (US) Buy (UK) Buy (CA) Buy (Worldwide)
Half-werewolf, half-Aedh Risa Jones can enter the realm between life and death, and she can see the Reapers who collect the souls of the dead. Now, she is using her gifts – and the investigative know-how of a man who broke her heart – to find a cabal searching for the power to control time, reality, and fate. And this is besides her work for the Vampire Council, half of whom want her dead. But for now the Council needs her alive. Someone is killing blood-whore addicted vampires, and Risa must find the guilty party. If she succeeds, she may finally convince the council to lift the execution order on her life. But before she succeeds, she must first survive…

Jeaniene Frost
Once Burned
HarperCollins (US: 26th June 2012)
Buy (US) Buy (UK) Buy (CA) Buy (Worldwide)
After a tragic accident scarred her body and destroyed her dreams, Leila never imagined that the worst was still to come: a terrifying ability to channel electricity and to see a person’s darkest secrets through a single touch. Leila is doomed to a life of solitude…until creatures of the night kidnap her, forcing her to reach out with a telepathic distress call to the world’s most infamous vampire… Vlad Tepesh inspired the greatest vampire legend of all – but whatever you do, don’t call him Dracula. Vlad’s ability to control fire makes him one of the most feared vampires in existence, but his enemies have found a new weapon against him – a beautiful mortal with powers to match his own. When Vlad and Leila meet, however, passion ignites, threatening to consume them. It will take everything they have to stop an enemy intent on bringing them down in flames.

Karen Ann Hopkins
Temptation
Harlequin Teen (US: 26th June 2012)
Review
Buy (US) Buy (UK) Buy (CA) Buy (Worldwide)
Your heart misleads you. That’s what my friends and family say. But I love Noah. And he loves me. We met and fell in love in the sleepy farming community of Meadowview, while we rode our horses together through the grassy fields and in those moments in each other’s arms. It should be ROSE & NOAH forever, easy. But it won’t be. Because he’s Amish. And I’m not. 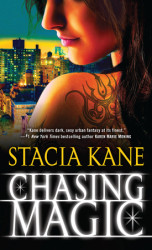 Stacia Kane
Chasing Magic (Downside Ghosts, Book 5)
Random House Del Rey (US & CA: 26th June 2012)
Buy (US) Buy (UK) Buy (CA) Buy (Worldwide)
Magic-wielding Churchwitch and secret addict Chess Putnam knows better than anyone just how high a price people are willing to pay for a chemical rush. But when someone with money to burn and a penchant for black magic starts tampering with Downside’s drug supply, Chess realises that the unlucky customers are paying with their souls – and taking the innocent with them, as the magic-infused speed compels them to kill in the most gruesome ways possible. As if the streets weren’t scary enough, the looming war between the two men in her life explodes, taking even more casualties and putting Chess squarely in the middle. Downside could become a literal ghost town if Chess doesn’t find a way to stop both the war and the dark wave of death-magic, and the only way to do that is to use both her addiction and her power to enter the spell and chase the magic all the way back to its malevolent source. Too bad that doing so will probably kill Chess – if the war doesn’t first destroy the man who’s become her reason for living.

Kelly Meding
Changeling (MetaWars, Book 2)
Simon & Schuster Pocket (US & CA: 26th June 2012)
Buy (US) Buy (UK) Buy (CA) Buy (Worldwide)
Dahlia “Ember” Perkins still feels like an outsider among her new Meta friends, despite everything she’s been through since coming into her miraculous ability to absorb heat and extinguish fires. But when the police need help investigating human skins discarded like slipcovers on the street, the Metas’ youngest team member quickly finds her place. Evidence points to a murderer the likes of which they have never encountered but who inexplicably seems to be gunning for Dahlia – and who may be neither human nor Meta. After a bullet meant for her nearly kills one of her teammates, Dahlia uncovers a connection to the crimes buried deep in her past. As the danger escalates and her personal life falls apart, Dahlia soon learns there’s no such thing as a “normal” relationship when you’re a superhero…

Rachel Vincent
Before I Wake
Harlequin Teen (US: 26th June 2012)
Buy (US) Buy (UK) Buy (CA) Buy (Worldwide)
Covering up her own murder was one thing, but faking life is much harder than Kaylee Cavanaugh expected. After weeks spent “recovering”, she’s back in school, fighting to stay visible to the human world, struggling to fit in with her friends and planning time alone with her new reaper boyfriend. But to earn her keep in the human world, Kaylee must reclaim stolen souls, and when her first assignment brings her face-to-face with an old foe, she knows the game has changed. Her immortal status won’t keep her safe. And this time Kaylee isn’t just gambling with her own life…

END_OF_DOCUMENT_TOKEN_TO_BE_REPLACED

Jennifer Lynn Barnes‘s romantic thriller Nobody to Egmont. About 2 supernaturally unnoticeable teens: 1 uses the skill to kill, while the other uses it to hide.

Sarah Crossan’s Breathe in a 3-book deal to Greenwillow (US/CA). About a world where oxygen is a precious commodity & only the rich breathe easily in the glass pod that is now home, from which 3 teens venture into the dangerous outlands beyond the pod with only 2 days of oxygen in their tanks. For publication in 2012.

Sophie Littlefield‘s The Museum of Eyes in a 2-book deal to Mira (World English). A family’s legacy of murder & abuse are but the 1st things a mother is determined to keep from her daughter.

Melissa Marr & Kelley Armstrong‘s The Blackwell Pages middle grade trilogy to Little, Brown (NA). The story of 2 12-year-old boys & 1 girl, all distant descendants of the Norse gods, who must journey to prevent the impending Ragnarok (the apocalypse). Book 1, Loki’s Wolves, is slated for publication in 2013.

Carolyn Crane‘s The Disillusionist Trilogy to FishBowl Media. About a psychological hit squad of misfits & neurotics who reform criminals by pumping them full of their negative energy, pitched as Heroes meets Inception.

Kathleen Peacock‘s Hemlock to Lane Shefter Bishop of Vast Entertainment. A small town is under siege by a werewolf virus.

Tagged Before I Wake, Breathe, Garveminder, Hemlock, Loki's Wolves, Nobody, The Museum of Eyes, White Cat