Tag Archives: A Blue So Dark

This guest blog is part of the official blog tour for Holly Schindler’s Feral. Below you’ll find Holly’s post, links, and information on her books.

How Feral Changed Through Its Various Incarnations

I’m sure it’ll come as a surprise to anyone who’s gotten their hands on a copy of Feral and read the opening two chapters when I say that the book started out as an MG mystery. In my initial version, the protagonist was seeking to solve the cold case of a murder involving a former student at her middle school.

During the revision process, the book became increasingly darker, grittier – so much so, I began to suspect that I needed to bump the book into the YA category. It might sound like a simple task, but it actually involved a complete overhaul. Moving it into YA, I also began to realise the genre was changing as well (initially, I thought it’d wind up being a horror novel). I also couldn’t keep my protagonist, not in the original way I’d envisioned her. That main character was just so…thirteen. She didn’t fit in a YA scenario at all. I had to invent a new protagonist.

Brainstorming who my new main character would be, I discovered her backstory: she survived a brutal gang beating in her hometown of Chicago. With this discovery, everything started to fall into place. The central theme of the book became recovery, and the genre, it was clear, was neither straight mystery OR horror, but psychological thriller.

Like classic psychological thrillers, Feral features elements of other genres: mystery, horror, paranormal…but the emphasis is on the “psychological” rather than thriller/action. The novel also features a Hitchcock-ian pace and focus on character development (here, we’re exploring the inner workings of the main character, Claire Cain).

Essentially, every aspect of Feral is used to explore Claire’s inner workings – that even includes the wintry Ozarks setting. The water metaphor is employed frequently in psychological thrillers to represent the subconscious, and in this instance is incorporated in the form of a brutal ice storm (that represents Claire’s “frozen” inner state). The attempt to untangle what is real from what is unreal (another frequently-used aspect of the psychological thriller) also begins to highlight the extent to which Claire was hurt in that Chicago alley. Even the explanation of the odd occurrences in the town of Peculiar offers an exploration into and portrait of Claire’s psyche.

Ultimately, as I indicated, Feral is a book about recovering from violence – we often hear about how lengthy or hard that process can be. But it can also be a terrifying process. The parameters and conventions of the classic psychological thriller allowed me to explore that frightening process in detail. 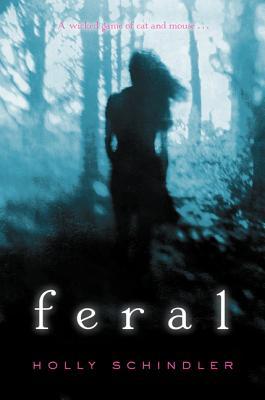 Holly Schindler
Feral
HarperCollins Teen (CA: 18th August 2014; US: 26th August 2014; AU: 1st October 2014)
Buy (US) Buy (UK) Buy (CA) Buy (Worldwide)
It’s too late for you. You’re dead. Those words float through Claire Cain’s head as she lies broken and barely alive after a brutal beating. And they continue to haunt her months later, in the terrifying nightmares that plague her. So when her father takes a job in another state, Claire is hopeful that getting out of Chicago will offer her a new start. But when she arrives in Peculiar, Missouri, Claire quickly realises something is wrong – the town is brimming with hidden dangers and overrun by feral cats. And her fears are confirmed when a popular high school girl, Serena Sims, is found dead in the icy woods behind the school. While everyone is quick to say it was an accident, Claire knows there’s more to it – for she was the one who found Serena, battered and bruised, surrounded by the town’s feral cats. Now Claire vows to learn the truth about what happened, but the closer she gets to uncovering the mystery, the closer she also gets to discovering a frightening reality about herself – and the damage she truly sustained in that Chicago alley…