All are US publication dates. (NOTE: As an Amazon Associate I earn from qualifying purchases.)

Better late than never, right? So here are some books you may have missed, released July 2021. All are US publication dates, and all buy links are to Kindle Editions. (NOTE: As an Amazon Associate I earn from qualifying purchases.) Goodreads links lead to my star-ratings (out of five) and any thoughts.

Tagged All These Warriors, Ballgowns & Butterflies, Cast in Secrets and Shadow, Choose Me, False Witness, July 2021 Releases, Mother of All, Northern Waste Box Set, Red Wolf, The Auction, The Mortal Touch, Those Who Survived, Tomorrow, Year of the Nurse

NOTE: As an Amazon Associate I earn from qualifying purchases.

Tagged A Girl of Dust & Death, Breathless, Broken Bonds, Dreaming Darkness: Volume Two, Eternal, Feel the Bern, Katzenjammer, Listen to Me, Paper Hearts Fast Draft Workbook, Shifting Summer, The Final Gambit, The Fortuna Coin, The House Across the Lake, The Pallbearers Club, The Stars Between Us, The Things We Seek, Tokyo Dreaming

Psst. Want to see some books that people in Australia can pre-order now, but people in the U.S. can’t? Then you’ve come to the right place! While I’m in Oz, I usually have my book search functions set as American. But due to geoblocking and whatnot, sometimes we get access to stuff that internationals can’t (or they may be able to in the future, but not now).

These are my recent findings, all Kindle Editions:

Tagged I Am the Tiger, Such Pretty Things, The Book of Sand, The Cookbook of Common Prayer, Tomorrow, Woman Eating

These are all the books I added to my wishlist from July 1st onwards. Because I’m so behind, some of these books have already been published. So click what takes your fancy, and maybe you’ll be in luck to buy and read straight away.

Tara Altebrando: TAKE ME WITH YOU: 1st June 2021: US Paperback

Naomi Clark: THE WITCH’S GUIDE TO WEREWOLVES: US Kindle Edition

Katelyn Detweiler: THE PEOPLE WE CHOOSE: 4th May 2021: US Kindle Edition & US Hardcover

Nicci French: THE OTHER SIDE OF THE DOOR: 27th April 2021: US Kindle Edition & US Paperback

Emiko Jean: TOKYO EVER AFTER: 25th May 2021: US Kindle Edition & US Hardcover

Seanan McGuire: ANGEL OF THE OVERPASS: 11th May 2021: US Kindle Edition & US Paperback

Saundra Mitchell: ALL THE THINGS WE DO IN THE DARK: 16th February 2021: US Paperback

Francine Pascal: LITTLE CREW OF BUTCHERS: 25th May 2021: US Paperback

Laura Ruby: THIRTEEN DOORWAYS, WOLVES BEHIND THEM ALL: 27th April 2021: US Paperback

Amy Tintera: ALL THESE MONSTERS: 15th June 2021: US Paperback

Paul Tremblay: NO SLEEP TILL WONDERLAND: 20th April 2021: US Kindle Edition & US Paperback

Tagged A Midwinter Night's Dream, A Winter Symphony, All the Things We Do in the Dark, All These Monsters, Angel of the Overpass, Betrayal, Bloody Ties, Calculated Risks, Choose Me, Cursed Luck, Defending the Galaxy, Earth Prime, Eternal, Exposed, Little Crew of Butchers, Look Mom I'm a Poet (and So Is My Cat), Magic Misled, No Sleep Till Wonderland, Novelista, Now Entering Addamsville, Project Hail Mary, Scales of Empire, Strange Exit, Strange Skies, Take Me with You, The Last One Home, The Other Side of the Door, The Pearl, The People We Choose, The Silent Wife, The Umbrella Lady, The Witch's Guide to Werewolves, Thirteen Doorways Wolves Behind Them All, Tokyo Ever After, Treasure, Two Tribes, Unjust Theft 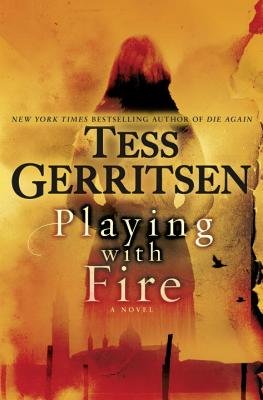 NOTE: Author Tess Gerritsen, also a trained musician, composed an accompanying piece for this novel. “Incendio”, performed by Yi-Jia Susanne Hou (who composed additional violin cadenza) on violin and Peter Longworth on piano, is available on Spotify here. The piece is part of the story’s plot, though in the book its composition is credited to one of the characters.

I’ve fallen terribly behind on the Rizzoli & Isles series of novels, but thought I’d get back into Tess Gerritsen’s work with this standalone. Had the author been someone else, I likely wouldn’t have tried it. A contemporary jet-setting thriller, with historical elements, is far from my cup of tea.

Having read the author’s blog and social media beforehand, I knew the spoiler going into the novel. Whether this affected my enjoyment of it, I’m not sure. I understand what the author tried to do with this story, but its execution consists of two different ideas that just aren’t stitched together well enough.

Surprisingly, the historical content interested me far more than the contemporary. I didn’t know much about the Holocaust in Italy, and while it’s difficult to read about, it’s also important to learn. At the camps, leaders used some of the captives to serve as musicians, which may have saved their lives, but at what cost?

The contemporary component has two plots: Julia’s daughter killed the family cat and injured Julia; meanwhile, Julia’s become obsessed with finding out more about the creation of “Incendio”. It’s the latter which brings down the book when it suddenly becomes a “you have the manuscript, therefore you must die” story of assassins hunting her down. Yeah, that kind of comes out of nowhere and is rather brief, with telling rather than showing.

And so the novel’s quality suffers because the connection between contemporary and historical isn’t strong enough to live up to the otherwise great ideas. Not a bad read, but not one I’d be quick to recommend.

Space-set Stories Appeal to Me. Have Yet to Identify WHY Exactly.

NOTE: Though there are discussions about specific films and books, there are no spoilers.

Had a bout of unexpected melancholy this afternoon, which was a bit troubling since I couldn’t identify a definite trigger. So I tried to think of what I’d done differently today…which was going to the local cinema to see Interstellar.

When it comes to commenting on films, I always feel the need to qualify my opinion with, “I rarely watch films – maybe once or twice a year at most.” Which is true. (2013 was an anomaly, because not only did I watch two films, but I watched the second movie the very next day after watching the first. As a result, I may have used all up all my emotions – I cried – during Rush, so when I watched Gravity the next day I…felt kind of blank in comparison.)

Generally speaking, film is not an easy medium for me to connect with. The circumstances have to be right: I have to watch alone, in a half-full cinema at most, so I can properly immerse. I have to really want to see a particular film at the cinema, or else I just won’t see it. (DVDs at home just aren’t immersive.)

So about the melancholy: I wasn’t sure if it was because of the film. Others may (and will) disagree, but the last third of Interstellar is schmaltz. It’s laughable, and I heard someone else in the cinema laugh, so it can’t have just been my opinion. I did rather enjoy the film overall, especially the first two acts, but the final part…I think it required too much suspension of disbelief, and that’s something that pulled me out of the immersive experience.

So why the melancholy? Maybe I wasn’t quite ready to leave the world of Interstellar. It goes for almost three hours, which is long enough, but I found myself more interested in Amelia Brand’s story, from that glimpse at the very end. And maybe that sparked my belated melancholy – there were still more stories to be told. I wanted to remain immersed.

And I think it’s good to analyse why we like what we like, because that may help us find more things to enjoy. Here are all the films I remember seeing in recent-ish years (the order may be incorrect):


If you see a pattern there, you’re not alone. Rush is an obvious anomaly, but you can see my tastes change from psychological to…space? Melancholia is the perfect bridge – weird, fascinating science with psychological trauma to make it relatable.

Also, Melancholia, Gravity, and Interstellar have another factor that makes them appeal: interpersonal relationships that aren’t romantic. In film, storytelling is more condensed, so it makes sense that there’s no romantic subplot. Interstellar easily could’ve forced a romantic relationship, but it didn’t and I’m glad it didn’t.

So while I didn’t love Interstellar, I certainly got value from it. Even though the last third is ridiculous 😉

My reading also tends toward science fiction. It may have been Mary E. Pearson’s The Adoration of Jenna Fox that taught me that sci-fi isn’t always military battleships in space against aliens (which was the stereotype of sci-fi that I had, for better or worse). My first book set in space was Tess Gerritsen’s Gravity (have you heard about the legal action?), and I absolutely loved it – reading it anywhere and everywhere, because I didn’t want to NOT read it. Albeit, that was in the days of dial-up Internet, so I had fewer distractions, but still…an immersive experience.

And Amy Kathleen Ryan’s Glow that taught me that stories set solely in space can work for me, too. Since then, I’ve read and enjoyed more space-set books (Maria V. Snyder’s Inside Out duology, Imogen Howson’s Linked duology, and Alexandra Duncan’s Salvage), with many more on my wishlist. (Beth Revis’s Across the Universe, to name just one.)

But why space? Why is it calling me? I know nothing about physics or quantum mechanics, or whatnot. Is it because I like the pretty photos taken by the Hubble telescope? Because shiny coloured lights appeal to me? Because I like science, even though I don’t necessarily understand it? Because it’s “other”?

But maybe I don’t NEED to understand why I like what I like. So I’ll just go with it, and see where my tastes might lead me to in the future…

Where Were You When You Read…?

You know all those memes where you list favourite book moments, tropes, characters, all-time faves, keeper shelf, re-reads, etc? I can’t do those. At all. Because my memory is atrocious. And there are simply too many books to read once, so no re-reading. No trying the same book later. You really only do get one chance with me 😉

So I don’t really have book memories. But for some special novels, I remember where I was when I read part of them. (The usual bed/bath/couch doesn’t count, because those are my regular reading places.) These three are all five-star books, by the way 🙂

END_OF_DOCUMENT_TOKEN_TO_BE_REPLACED

Subject to change, if my other library reservation comes in, or if I get more ARCs or review copies.

Tagged A Fistful of Charms, Every Which Way But Dead, For a Few Demons More, Fractured, Frostbitten, Genesis, Keeping the Dead, Ritual, The Bone Garden, The Laughing Corpse, The Mammoth Book of Vampire Romance, Three Days to Dead, Where Demons Dare