Some of my recent finds. (NOTE: As an Amazon Associate I earn from qualifying purchases.)

Tagged All the Best Liars, Book of Night, Cold as Hell, Inch Worms, The Deepest of Secrets, The Last Laugh, The Trapped Wife, Wicked Legacy

Better late than never, right? So here are some books you may have missed, released January 2021. All are US publication dates, and all buy links are to Kindle Editions. (NOTE: As an Amazon Associate I earn from qualifying purchases.) Goodreads links lead to my star-ratings (out of five) and any thoughts.

Tagged All the Things We Need, Deep into the Dark, Dreamscapes, Every Single Lie, Hotel Cartagena, January 2021 Releases, Single Mother, Sophie, The Little Sleep, The Shadow

END_OF_DOCUMENT_TOKEN_TO_BE_REPLACED

I have Kindle Edition shopped. Buy these books now, or pay more for them later!

Tagged Another Little Piece, Date Night, Some Marketing Advice, Some Publishing Advice, Tell Me a Secret, The Echo Room, The Liar's Wife, Womb

[REVIEW] Before You Die – Samantha Hayes 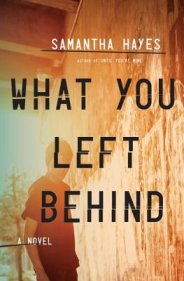 Samantha Hayes’s previous novel, Until You’re Mine, is fabulous. Family-based paranoia, its creepiness is very affective. But what makes it so good is that it mostly focuses on ordinary people, who AREN’T in law enforcement and investigation. Mostly.

Thus what makes Until You’re Mine stand out from the crowd is unfortunately missing here. I enjoyed meeting Detective Inspector Lorraine Fisher and her family back then, and I still like Lorraine here in Before You Die. Often faced with other police members’ incompetence or carelessness, she strides in and takes over – because someone has to, and since no one else seems to have bothered, it’s up to Lorraine. (Really, how is Burnley still employed?)

Yes, Before You Die is family-based paranoia like its predecessor, and it still has a twist for the very last chapter. But because it mainly focuses on Lorraine’s family, it just doesn’t have the same appeal as the first book. It’s still well-written and engaging, but the series seems now in police-procedural territory…and thus difficult to stand out from all the other police procedurals on the crime shelves.

The third novel in the series is being released shortly, and I look forward to reading it. And though I really like Lorraine, I hope this new novel will regain what made the first book so fabulous.

Tagged Before You Die