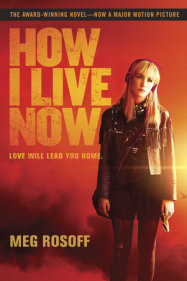 I don’t care if you’re an amateur or a professional writer – you are NEVER above using quotation marks!

Yes, this award-winning book lacks quotation marks. It could also use some more commas, due to the frequent use of run-on sentences. I don’t care if that counts as “voice”. I don’t care if it’s totally legit in literature. It’s NOT okay for me, and it’s NOT okay for the aspiring writers out there who think that if a professional author lacks punctuation and grammar that they can do that, too.

But I tolerated it, because the book is only 194 pages long. That doesn’t stop me from shouting about how much it pisses me off, though.

So American Daisy is in England with her cousins when bombs go off, and the country is occupied. It takes almost half the entire novel for this to have any impact on the family. After all, Daisy’s too busy shagging one of her cousins, and – just like the war – this incest is treated as No Big Deal. Only it’s a FARKING BIG DEAL, PEOPLE; OR IS THIS ALL FINE AND DANDY IN COUNTRIES LIKE ENGLAND AND THE U.S.?

Oh, did I mention the cousins have psi abilities? And Daisy develops psi ability, too. None of this is important to the plot; just another way to justify the romance as True Love, or whatever.

Here’s my thought on speculative fiction: If you’re going to have a speculative element (e.g. war), then everything else should be as realistic as possible, so readers don’t have to suspend disbelief so much. Psi abilities? GET RID OF IT! For fark’s sake, we know these kids are all Special Snowflakes; they don’t need any extra specialties!

I actually liked this story more than my comments suggest. But when things pissed me off, they pissed me off big time. Your experience may differ.

P.S. “Major Motion Picture”? Hardly major. No promo here, except from reviews in three places that I’ve seen (Herald Sun, Sunday Herald Sun, and ABC TV’s At the Movies) – no ads or whatnot.

Tagged How I Live Now