END_OF_DOCUMENT_TOKEN_TO_BE_REPLACED

Lauren Dane & Megan Hart
There All Along (Anthology of two novellas)
Penguin Berkley (US & CA: 3rd December 2013)
Buy (US) Buy (UK) Buy (CA) Buy (Worldwide)
“LAND’S END” BY LAUREN DANE: The Land’s End highway is one of the most dangerous places in the universe. The constant peril of brigands keeps Verity Coleman stuck in Silver Cliffs, dreaming of the open road – and of Loyal Alsbaugh, the tall and silent highway patrolman. When her town is attacked, Verity has a chance to win over Loyal’s muted heart. But will his wounded past make him leave her along the road, or can she convince him to take her along? “BY THE SEA OF SAND” BY MEGAN HART: Captain Kason Reed was willing to give his life to the Sheirran Defense Forces, but now he can’t remember anything but bits and pieces of the war. When his sexual attraction to his caregiver, Teila, causes him to make advances toward her, she becomes the aggressor, urging him with her body to explore the memories of his past – memories that all seem to draw him back to Teila… 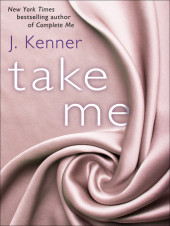 J. Kenner
Take Me (Stark, Novella)
Random House Bantam (US & CA: 3rd December 2013); Hachette Headline (UK: 3rd December 2013)
Buy (US) Buy (UK) Buy (CA)
I’ve long dreamed of my fairy tale wedding, but it wasn’t until I met Damien Stark – who captured me with his kisses and undid me with his touch – that I began to believe it was my destiny. Though we both carry secrets and scars, our shared passion heals us, binding us together. We have surrendered to each other completely, and our mutual ecstasy is the brightest light in my life. But darkness still snakes through the cracks in our armour. Ghosts from our past have moved in, bringing fresh pain that cuts deep and threatens to destroy everything we hold dear. Damien is my anchor to this world, and I am his. But if we are going to keep each other, we have to fight the shadows of our pasts to move forward into our future.

Tagged Take Me, There All Along

END_OF_DOCUMENT_TOKEN_TO_BE_REPLACED

Tagged Daylighters, If You Find Me, The Arrivals, There All Along, This Girl

Tagged Afterglow, Embers & Echoes, Rags & Bones, Tear You Apart, The Dream Thieves, The Incrementalists, There All Along

END_OF_DOCUMENT_TOKEN_TO_BE_REPLACED

Maya Banks & Lauren Dane
Cherished (Anthology)
Penguin Berkley (US & CA: 7th August 2012)
Buy (US) Buy (UK) Buy (CA) Buy (Worldwide)
EXILED BY MAYA BANKS: Enticed to the island paradise where an enigmatic prince is living in exile, beautiful, virginal Talia is introduced to a world of forbidden pleasure where the prince’s every whim is fulfilled and her fantasies are rendered in exquisite detail. But when the prince is summoned back to fulfil his duty to his struggling country, reality is thrust upon Talia all too soon. She returns home, heartbroken, convinced she was a passing fancy for an idle ruler and his most trusted men. Until the day they arrive on her doorstep, determined to have her back where she belongs. SWAY BY LAUREN DANE: Levi Warner is an established, older man – wealthy, powerful, and above all, respectable. Then Levi meets Daisy, an uninhibited 24-year-old dance instructor and artist, not exactly the kind of woman Levi is accustomed to. But the young, free spirit brings out something in him he only experienced in fantasies. When their scorching affair turns into something unexpectedly deeper, Levi finds himself torn between preserving his reputation, and exploring a wilder and much more satisfying kind of life.

Kira Brady
Hearts of Darkness (Deadglass, Book 1)
Kensington Zebra (US: 7th August 2012)
Buy (US) Buy (UK) Buy (CA) Buy (Worldwide)
Nurse Kayla Friday has dedicated her life to science and reason. But for her, Seattle is a place of eerie loss and fragmented, frightening memories. And now the only clue to her sister’s murder reveals a secret battle between two ancient mythologies…and puts Kayla in the sights of lethally-sexy werewolf mercenary Hart. He’ll do whatever it takes to obtain the key to the Gate of the Land of the Dead and free what’s left of his soul. But seducing the determined Kayla is putting them at the mercy of powerful desires neither can control. And as the clock ticks down to hellish catastrophe, the untested bond between Kayla and Hart may lead to the ultimate sacrifice.

Rachel Caine
Two Weeks’ Notice (Revivalist, Book 2)
Penguin Roc (US & CA: 7th August 2012)
Buy (US) Buy (UK) Buy (CA) Buy (Worldwide)
After dying and being revived with the experimental drug Returne, Bryn Davis is theoretically free to live her unlife – with regular doses to keep her going. But Bryn knows that the government has every intention of keeping a tight lid on Pharmadene’s life-altering discovery, no matter the cost. Thankfully, some things have changed for the better; her job at the rechristened Davis Funeral Home is keeping her busy and her fragile romance with Patrick McCallister is blossoming – thanks in part to their combined efforts in forming a support group for Returne addicts. But when some of the group members suddenly disappear, Bryn wonders if the government is methodically removing a threat to their security, or if some unknown enemy has decided to run the zombies into the ground…

Andrea Cremer
Rift (Nightshade Prequel, Book 1)
Penguin Philomel (US & CA: 7th August 2012); Hachette Atom (UK: 7th August 2012; AU: August 2012)
Buy (US) Buy (UK) Buy (CA) Buy (Worldwide)
Ember has always known that she owed her life to a mysterious order of Knights who saved her as a baby. The same order of Knights who called her best friend to service, leaving her behind to play the dutiful daughter. But shortly after her sixteenth birthday, Alistair returns. Although he seems altered – shadowed and broodin – Ember places her trust in him, knowing that he’s her one chance to escape. Little does she know what danger lies ahead. For this is a tumultuous time and Ember will soon be caught up in an age-old struggle between darkness and light. Neither she, nor her heart, can possibly survive unscathed.

Jackson Pearce
Sweetly
Hachette Little, Brown (US: 7th August 2012)
Buy (US) Buy (UK) Buy (CA) Buy (Worldwide)
As a child, Gretchen’s twin sister was taken by a witch in the woods. Ever since, Gretchen and her brother, Ansel, have felt the long branches of the witch’s forest threatening to make them disappear too. Years later, when their stepmother casts Gretchen and Ansel out, they find themselves in sleepy Live Oak, South Carolina. They’re invited to stay with Sophia Kelly, a beautiful candy maker who moulds sugary magic: coveted treats that create confidence, bravery, and passion. Life seems idyllic, and Gretchen and Ansel gradually forget their haunted past – until Gretchen meets handsome local outcast Samuel. He tells her the witch isn’t gone – it’s lurking in the forest, preying on girls after Live Oak’s infamous chocolate festival each year, and looking to make Gretchen its next victim. Gretchen is determined to stop running and start fighting back. Yet, the further she investigates the mystery of what the witch is and how it chooses its victims, the more she wonders who the real monster is. Gretchen is certain of only one thing: a monster is coming, and it will never go away hungry.

Kat Richardson
Seawitch (Greywalker, Book 7)
Penguin Roc (US & CA: 7th August 2012)
Buy (US) Buy (UK) Buy (CA) Buy (Worldwide)
Harper Blaine was your average small-time PI until she died – for two minutes. Now Harper is a Greywalker, treading the thin line between the living world and the paranormal realm. And she’s discovering that her new abilities are landing her all sorts of “strange” cases. A quarter century ago, the Seawitch cruised away from her dock and disappeared with everyone on board. Now, the boat has mysteriously returned to her old berth in Seattle and the insurance company has hired Harper to find out what happened. But Harper is not the only one investigating. Seattle Police Detective Rey Solis is a good cop, albeit one who isn’t comfortable with the creepy cases that always seem to end up in Harper’s lap. As they explore the abandoned vessel, Harper and Solis discover a cabin containing symbols drawn in human blood, revealing the ghost ship’s grave history. As Solis focuses on the possible murder of a passenger’s wife, Harper’s investigation leads her to a powerful being who may be responsible for the disappearance of the Seawitch’s passengers and crew. And while their searches lead Harper and Solis in different directions, they will need to put aside their differences to solve a deadly mystery twenty-five years in the making…

Jessica Verday
The Hidden (The Hollow, Book 3)
Simon & Schuster Pulse (US & CA: 7th August 2012)
Buy (US) Buy (UK) Buy (CA) Buy (Worldwide)
Abbey knows that Caspian is her destiny. Theirs is a bond that transcends even death. But as Abbey finally learns the full truth about the dark fate that links her to Caspian and ties them both to the town of Sleepy Hollow, she suddenly has some very hard choices to make. Caspian may be the love of her life, but is that love worth dying for?