TRIGGER WARNINGS: Rape, torture, murder (including that of children and babies), gas-lighting, racism.

Princess Meredith NicEssus has given birth. And instead of the twins she expected, Merry actually has triplets. More babies, more problems; right?

Any trouble getting the kids to nurse? Of course not – Merry may be a first-time mum, but she has MagicBoobs.

But there are three babies and only two breasts. Is there enough breast-milk to go around? No worries. The most petite must have all-natural things, so she can only feed directly from Merry. The older girl screams if you make her feed from a bottle. But luckily the baby boy doesn’t cry as much as his sisters, so he’s always the one bottle-fed. Also, the girls have magical powers, and he does not. He doesn’t add anything to the storyline, so maybe he exists just so some fathers can say one of the babies is biologically theirs.

And yes, the most petite female is the most powerful. This is an LKH novel, after all.

Any post-natal depression? Difficulty getting the babies to settle? Sleep deprivation? Left alone with the babies and feeling hopeless? Never. There are nannies, as well as the babies’ fathers: Doyle, Frost, Rhys, Galen, Mistral, Sholto, Royal, Kitto… (Well, the first six of them are definitely the biological dads – can’t remember if the last two are, but they’re fully integrated into the family.)

Oh, and Merry’s lost all the baby weight…except for the extra cup size. MagicBoobs, you know. She complains about them, but only half-heartedly.

The characters often seem interchangeable, but Rhys stands out – just not in a good way.

From page 183: “Let’s just say my sithen is in a bad section of L.A. and I’m blond and blue-eyed and don’t exactly look like I belong.”

Eff you and your racism, Rhys.

But wait – there’s more. His son died in battle, due to an explosive. Rhys did not deal with this in a healthy manner…

From page 194: “I hunted down every member of the tribe that had fought against us. I killed them all, down to the last baby. I destroyed them as a race, do you understand that, I killed their entire people, even the children, while their mothers begged for mercy.”

I’m pretty sure those kids had absolutely nothing to do with the death of Rhys’s son, yet he killed them anyway. You would’ve thought a mourning parent wouldn’t wish a child’s death upon their worst enemy…

But there were no parents left to mourn the children because RHYS KILLED THEM, TOO.

And in this scene, Merry and Galen COMFORT Rhys – he who destroyed an entire tribe, including many innocents. But because Rhys’s son died, albeit not killed by him, Rhys is the one for whom everyone feels sorry.

I do not have enough middle fingers to aim towards this book. My two are just too few.

P.S. In case you wanted to know the plot, here it is:

Tagged A Shiver of Light

At lunch, Anita Blake and three of her men engage in public displays of affection, and flirt with the waiter. They’re being watched. When Anita goes there alone later, she’s approached by two werelions, who will kill Anita’s loved ones if she doesn’t raise a zombie for their client – the same person from whom Anita earlier turned down work.

When the author is good, she’s very good, as demonstrated in the cemetery scene. Laurell K. Hamilton is at her best taking Anita through the procedure of animating zombies. Instead, most of the book follows the politics surrounding the werelions. And whilst the chapter with Natalie Zell is interesting, it ultimately has nothing to do with the story, except for a short time making Anita wonder who sent the hired goons – and the answer is in the book’s cover copy, and thus not a spoiler.

This between-the-novels snapshot is ultimately unnecessary, and is not worth the hardcover price. Borrow this one from the library, or wait until a paperback edition is available for purchase. You’re not missing much.

US covers for both Laurell K. Hamilton’s Bullet and Jessica Verday’s The Haunted (Evan Schwartz did the art for this one).

END_OF_DOCUMENT_TOKEN_TO_BE_REPLACED

Since I listed YA Releases yesterday, it’s only fair that I list the adult ones today. Only I don’t like using the term “adult” – makes the books sound skeevy. They may BE skeevy, but we don’t have to advertise them that way 😉

Disclaimer: Does not include every title, stuff I’ve already read isn’t included, only listing them if I have release dates, may be reprints and international editions, etc… Check my Reading Wishlist for more titles. 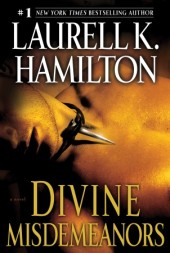 In Los Angeles, demi-fey are being killed in a certain way, the crime scenes bloody close to illustrations in storybooks. ‘Twould make a macabre but compelling plot, but instead here it’s only a sub-plot. For a private detective, Merry Gentry doesn’t seem to do much work. In this tome, she visits crime scenes, a lab, and basically does a lot of talking. There’s no personal danger for her, considering she’s guarded by at least two men at all times. So if you’re looking for a thriller or mystery, you’ve come to the wrong book.

If relationship melodrama is your thing, you’ll gobble up Divine Misdemeanors. If you thought becoming pregnant would kill Merry’s sex life, you’re strongly mistaken. She has five different partners in this series’s eighth novel, and her snatch continues to be magical: Shagging in the sea creates a new sithen, and shagging a demi-fey makes the male grow to human size – and not just in the pants department. Not kinky enough for you? Apparently tentacles go for boobs, because the appendages have spines, and would likely damage a snatch, perhaps even Merry’s magical one.

The storybook serial kills are fascinating, but they barely get a look in here. Don’t bother buying the hardcover – wait for the paperback, or just borrow the hardcover from the library. But really, if you never get to read Divine Misdemeanors, you’re not missing anything of note.

Anita Blake can raise the dead, and is usually willing to pay the price (killing a chicken). However, the older the zombie, the higher the cost, and to meet overtly wealthy Harold Gaynor’s requirements she’ll have to make a human sacrifice. Anita may be known as the Executioner, but there are some things a self-respecting animator won’t do, no matter how many millions are offered to her. And no matter how much she’s tortured.

There’s a good reason readers have fond memories of these early Anita books – they’re bloody good. This, the second in the series, may be fifteen years old, but it’s aged rather well. The content is fascinating, the characters are suitably annoying and/or creepy, and Anita has toy penguins. Not a shag in the novel, though she admits her lust for an emopire who wears a really hideous shirt, Jean-Claude, but he declares her lust is “desire”. Vampires are habitually up themselves, so this should come as a surprise to no one.

And it’s nice to see Anita strike up a new friendship-of-convenience of sorts. Private investigator Veronica Sims may not be good enough for her, but prostitute Wheelchair Wanda is more than just someone from whom to get dirt on Gaynor. Speaking of Harold, he is one sick bastard, but still not the scariest character in the story. That honour is reserved for Dominga Salvador, for whom with much power comes…well, that woman is seriously effed in the head, and not in a “diagnosed mental illness” way, but rather “she’s totally sane and gets her jollies off these horrible things”. Just wait ’til you meet the monster – some broken pieces should never be put together…

The Laughing Corpse does seem somewhat slow, but so do all the other LKH books I’ve read. Still, I pretty much read the last half in one sitting, and it’s an absolute cracker. Quality novels like this make me feel all the more disappointed that the series later jumped the shark.

END_OF_DOCUMENT_TOKEN_TO_BE_REPLACED

US cover for Laurell K. Hamilton’s Flirt. And because it’s huge, here’s the link to the UK cover for Ann Aguirre’s Blue Diablo.