END_OF_DOCUMENT_TOKEN_TO_BE_REPLACED

Megan Crewe
The Lives We Lost (Fallen World, Book 2)
Disney-Hyperion (US: 12th February 2013)
Buy (US) Buy (UK) Buy (CA) Buy (Worldwide)
A deadly virus has destroyed Kaelyn’s small island community and spread beyond the quarantine. No one is safe. But when Kaelyn finds samples of a vaccine in her father’s abandoned lab, she knows there must be someone, somewhere, who can replicate it. As Kaelyn and her friends head to the mainland, they encounter a world beyond recognition. It’s not only the “friendly flu” that’s a killer – there are people who will stop at nothing to get their hands on the vaccine. How much will Kaelyn risk for an unproven cure, when the search could either destroy those she loves or save the human race? Kate Ellison
Notes from Ghost Town
Random House Egmont (US: 12th February 2013)
Buy (US) Buy (UK) Buy (CA) Buy (Worldwide)
Olivia Tithe was excited for the summer and spending it with her best friend, Stern. But that was ruined when he was murdered…by Olivia’s mother. Flashing forward, Olivia’s life has been transformed since that awful night. After her mother’s incarceration, Olivia must move on, but she hates her father’s new fiancée, Heather, and with her dad’s new real estate development (she calls it Ghost Town) in the works, she barely sees him. But a new boy, Austin, has kindled feelings inside her that she hasn’t felt since Stern’s death. Arriving at the same time as this new guy is a mysterious note that brings Stern’s murder back to the forefront; Olivia knows that she must discover the truth behind her friend’s death once and for all. 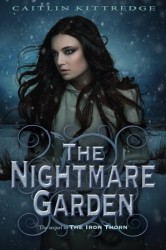 Caitlin Kittredge
The Nightmare Garden (Iron Codex, Book 2)
Random House Ember (US & CA: 12th February 2013)
Buy (US) Buy (UK) Buy (CA) Buy (Worldwide)
Everything Aoife thought she knew about the world was a lie. There is no Necrovirus. And Aoife isn’t going to succomb to madness because of a latent strain – she will lose her faculties because she is allergic to iron. Aoife isn’t human. She is a changeling – half human and half from the land of Thorn. And time is running out for her. When Aoife destroyed the Lovecraft engine, she released the monsters from the Thorn Lands into the Iron Lands and now she must find a way to seal the gates and reverse the destruction she’s ravaged on the world that’s about to poison her.

Caitlin Kittredge
The Mirrored Shard (Iron Codex, Book 3)
Random House Delacorte (US & CA: 12th February 2013)
Buy (US) Buy (UK) Buy (CA) Buy (Worldwide)
Aoife Grayson must face death to win back Dean – the love who was ripped from the Iron Lands of the living when he was shot in the arctic north. But getting to the Deadlands is something that Aoife can’t do on her own. And if she can find a way there, Tremaine would surely never allow it. He has sworn to keep her in the Thorn Lands, the fairie home of her mother, Nerissa. But Aoife is determined to find her way out. And she has no trouble if that means she has to kill Tremain and his queen to do it.

Richelle Mead
The Indigo Spell (Bloodlines, Book 3)
Penguin (US, UK, CA & AU: 12th February 2013)
Buy (US) Buy (UK) Buy (CA) Buy (Worldwide)
Sydney Sage is an Alchemist, one of a group of humans who dabble in magic and serve to bridge the worlds of humans and vampires. They protect vampire secrets – and human lives. In the aftermath of a forbidden moment that rocked Sydney to her core, she struggles to draw the line between her Alchemist teachings and what her heart is urging her to do. Then she finally tracks down the elusive, enigmatic Marcus Finch – a former Alchemist who the organisation denies exists, and who lives in shadows, on the run. With Marcus’s help, Sydney realises that the group she’s been loyal to her whole life has been hiding the truth from her. Is it possible that her golden lily tattoo might have more power over her than she thinks? As she struggles to come to terms with what that might mean, Sydney is compelled to use her growing magical powers to track down an evil magic user who is targeting powerful young witches. Using magic goes against everything she always thought she believed, but she realises that her only hope is to embrace her special blood – or else she might be next. Forging her own way is harder than Sydney ever dreamed. Maybe by turning off her brain – and following her heart – she’ll be able to finally figure out where she belongs.

Kristen Simmons
Breaking Point (Article 5, Book 2)
Macmillan Tor (US: 12th February 2013)
Buy (US) Buy (UK) Buy (CA) Buy (Worldwide)
After faking their deaths to escape from prison, Ember Miller and Chase Jennings have only one goal: to lay low until the Federal Bureau of Reformation forgets they ever existed. Near-celebrities now for the increasingly sensationalised tales of their struggles with the government, Ember and Chase are recognised and taken in by the Resistance – an underground organisation working to systematically take down the government. At headquarters, all eyes are on the sniper, an anonymous assassin taking out FBR soldiers one by one. Rumours are flying about the sniper’s true identity, and Ember and Chase welcome the diversion… Until the government posts its most-wanted list, and their number one suspect is Ember herself. Orders are shoot to kill, and soldiers are cleared to fire on suspicion alone. Suddenly Ember can’t even step onto the street without fear of being recognised, and “laying low” is a joke. Even members of the Resistance are starting to look at her sideways. With Chase urging her to run, Ember must decide: Go into hiding…or fight back?

Kasie West
Pivot Point
HarperCollins (US & CA: 12th February 2013)
Review
Buy (US) Buy (UK) Buy (CA) Buy (Worldwide)
Addison Coleman’s life is one big “What if?” As a Searcher, whenever Addie is faced with a choice, she can look into the future and see both outcomes. It’s the ultimate insurance plan against disaster. Or so she thought. When Addie’s parents ambush her with the news of their divorce, she has to pick who she wants to live with – her father, who is leaving the paranormal compound to live among the “Norms,” or her mother, who is staying in the life Addie has always known. Addie loves her life just as it is, so her answer should be easy. One Search six weeks into the future proves it’s not. In one potential future, Addie is adjusting to life outside the Compound as the new girl in a Norm high school where she meets Trevor, a cute, sensitive artist who understands her. In the other path, Addie is being pursued by the hottest guy in school – but she never wanted to be a quarterback’s girlfriend. When Addie’s father is asked to consult on a murder in the Compound, she’s unwittingly drawn into a dangerous game that threatens everything she holds dear. With love and loss in both lives, it all comes down to which reality she’s willing to live through…and who she can’t live without.

END_OF_DOCUMENT_TOKEN_TO_BE_REPLACED

Common First Names of YA Authors

Rachel Vincent mentioned on her blog how numerous some first names of YA authors are. Sometimes they’re spelled differently, but I’ve made a little list. Most popular: Amanda, Amy, Jennifer, Jessica, Kate, Megan, Rachel, and Sara.

END_OF_DOCUMENT_TOKEN_TO_BE_REPLACED 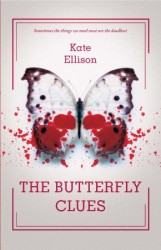 Grief for a dead brother leads to investigating the murder of a stripper in Neverland, a dangerous part of Cleveland. Lo Marin is a kleptomaniac who obsessively-compulsively does things in multiples of three. It gives her a sense of control, yet giving into those urges is losing control – hmm.

Anyhoo, Lo steals jewellery, clothing, and journals of Sapphire, whose murder she inadvertently hears. Soon she’s trying to identify a pseudonymous person who could be key to solving the crime.

I easily figured out who Bird and Anchor were, but that didn’t hinder my interest. But the novel is slow at first, seemingly without a plot before the investigation begins properly. A beautifully written tale, readers may be more intrigued by the dead rather than those still alive.

Warning: Yes, there’s a love triangle, but Lo is only interested in one of them – the mysterious one, rather than the nice guy at school.

Warning: Yes, a work of literature studied in Lo’s class coincides with the plot. There’s the theme of doomed lovers: Romeo and Juliet, and Sapphire and Bird.