END_OF_DOCUMENT_TOKEN_TO_BE_REPLACED

K. L. Amrstrong & M. A. Marr
Odin’s Ravens (Blackwell Pages, Book 2)
Hachette Little, Brown (US, UK & AU: 13th May 2014)
Buy (US) Buy (UK) Buy (CA) Buy (Worldwide)
When thirteen-year-olds Matt Thorsen and Fen and Laurie Brekke – modern descendents of Thor and Loki – discovered they were destined to take the places of the Norse gods in an epic battle against the apocalypse, they thought they knew how things would play out. Gather the other descendents, defeat a giant serpent and save the world. No problem, right? But their journey grinds to a halt when their friend Baldwin is poisoned. Matt, Fen and Laurie must travel to the murky Underworld to try and save him before they can continue with their quest to find Thor’s hammer. Ahead lie colossal monsters and legendary battles… Will Matt and the other descendents do enough to become heroes in their own right?

Jillian Cantor
Searching for Sky
Bloomsbury (US: 13th May 2014)
Buy (US) Buy (UK) Buy (CA) Buy (Worldwide)
Sky and River have always lived on Island, the only world they’ve ever known. Until the day River spots a boat. Across Ocean, in a place called California, Sky is separated from River and forced to live with a grandmother she’s just met. Here the rules for survival are different. People rely on strange things like cars and cell phones. They keep secrets from one another. And without River, nothing makes sense. Sky yearns for her old life where she was strong and capable, not lost and confused. She must find River so they can return to Island, but the truth behind how they ended up there in the first place will come as the biggest shock of all.

Debra Driza
Renegade (MILA 2.0, Book 2)
HarperCollins (US & CA: 13th May 2014)
Buy (US) Buy (UK) Buy (CA) Buy (Worldwide)
There is no one left for Mila to trust. Except for a boy she barely knows. With her mother gone, Hunter Lowe is the only person she can turn to for help, the only person who really cares about her. But he has no idea who – and what – Mila really is. She can’t bear to reveal her secret, even though he’s unwittingly joined her search for Richard Grady, a man who may know more details of Mila’s complicated past. Losing the last tie to her normal life just isn’t an option. Yet the road to the truth is more dangerous than ever. With General Holland and the Vita Obscura scouring the earth for her whereabouts, Mila must rely on her newfound android abilities to protect herself and Hunter from imminent harm. Still, embracing her identity as a machine leads her to question the state of her humanity – as well as the real motives of the guy she’s falling hopelessly in love with. 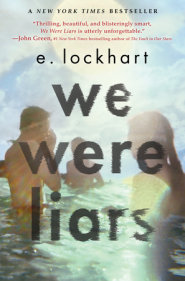 E. Lockhart
We Were Liars
Random House Delacorte (US & CA: 13th May 2014)
Review
Buy (US) Buy (UK) Buy (CA) Buy (Worldwide)
A beautiful and distinguished family. A private island. A brilliant, damaged girl; a passionate, political boy. A group of four friends – the Liars – whose friendship turns destructive. A revolution. An accident. A secret. Lies upon lies. True love. The truth.

Eve Silver
Rush (The Game, Book 1)
HarperCollins Katherine Tegen (US & CA: 13th May 2014)
Buy (US) Buy (UK) Buy (CA) Buy (Worldwide)
Miki Jones’s carefully controlled life spirals into chaos after she’s run down in the street, left broken and bloody. She wakes up in a place called the lobby – pulled from her life, pulled through time and space into some kind of game where she and a team of other teens are sent on missions to eliminate the Drau, terrifying yet beautiful alien creatures. There is no training and no way out. Every moment of the game is kill or be killed, and Miki has only the questionable guidance of Jackson Tate, the team’s secretive leader. He evades her questions, holds himself aloof from the others, and claims it’s every player for himself. Then Jackson says this isn’t really a game, that what Miki and her new teammates do now determines their survival and the survival of every other person on this planet. She laughs, he doesn’t, and the game takes a deadly and terrifying turn.

Amy Tintera
Rebel (Reboot, Book 2)
HarperCollins Teen (US & CA: 13th May 2014)
Buy (US) Buy (UK) Buy (CA) Buy (Worldwide)
Wren Connolly thought she’d left her human side behind when she died five years ago and came back 178 minutes later as a Reboot. With her new abilities of strength, speed, and healing – along with a lack of emotions – Wren 178 became the perfect soldier for HARC (Human Advancement and Repopulation Corporation). Then Callum 22 came along and changed everything. Now that they’ve both escaped, they’re ready to start a new life in peace on the Reboot Reservation. But Micah 163, the Reboot running the reservation, has darker plans in mind: to wipe out the humans. All of them. Micah has been building a Reboot army for years and is now ready to launch his attack on the cities. Callum wants to stick around and protect the humans. Wren wants nothing more than to leave all the fighting behind them. With Micah on one side, HARC on the other, and Wren and Callum at odds in the middle, there’s only one option left… It’s time for Reboots to become rebels.

Carol Lynch Williams
Signed, Skye Harper
Simon & Schuster (US, UK, CA & AU: 13th May 2014)
Buy (US) Buy (UK) Buy (CA) Buy (Worldwide)
Life is just fine for fourteen-year-old Winston. She loves her dog, Thelma, and although she never knew her dad, and her mom left ten years ago in search of Hollywood fame, Winston has family with Nanny, who is in her forties, and that doesn’t even make her old. But a “just fine” life gets a lot more exciting when a letter arrives from Skye Harper, aka Judith Fletcher, aka Winston’s mother. She needs help, and Nanny says the best way to give it is to take a cross-country road trip – in a “borrowed” motor home – to go find Mama once and for all. Winston’s not so sure about this plan, but with a cute stowaway named Steve along for company and an adventure on the horizon, this is sure to be a summer to remember.