END_OF_DOCUMENT_TOKEN_TO_BE_REPLACED

If your book is over 400 pages, every bloody page should deserve to be there.

Greg Iles’s The Bone Tree is just over 800 pages (Australian trade paperback edition). And I’m sorry to report that an entire plotline didn’t work for me at all. This is awkward because the interesting bits are awesome, but an entire plotline bored me so much that my attention was near nil.

The bothersome (for me) subplot involves political figures from the 1960s. One of the fictional characters even interviews, and is flirted with by, one of these people in the contemporary. And I just didn’t care. I don’t want real people in fiction.

Lincoln Turner makes an excellent point when he remarks that white people have become the focus. Penn Cage and everyone else are no longer concerned with the death of Viola Turner – Penn’s single-mindedly driven towards keeping his father safe and out of prison. Caitlin Masters is focused on continuing the investigative journalism into the Double Eagles that Henry started.

But the story really gets fascinating when Caitlin starts searching the swamp. And the DIY-surgery scenes are riveting.

The Bone Tree really packs a punch when it sticks to fictional characters. But when it involves real people, I lost interest. This novel could’ve been an absolute stunner. It still has flashes of brilliance, but interspersed are too many scenes that fail to engage. 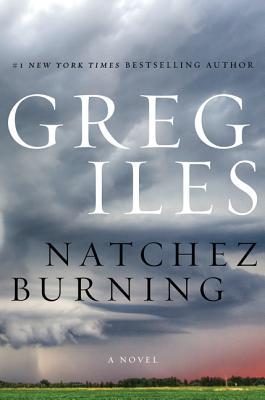 A 791-page tome is a big ask. Especially considering it’s a thriller, and the first in a trilogy – is it possible to keep the tension going for so long? Greg Iles is no ordinary writer, and thus he succeeds where others wouldn’t.

It’s also quite a challenge to write about racism and prejudice, and the author asks all the tough questions, with even more uncomfortable answers. And that’s the point: people are often prejudiced, though they don’t mean to be. Even thinking of someone as “exotic,” and admitting that’s part of the allure – this is prejudice, and Tom Cage acknowledges that. In a promotional video, the author says, “No one is immune to prejudice,” and this book shows that truth.

This is Mississippi. Even in my high school in far away Australia, studying the film Mississippi Burning was part of the English curriculum. Although the lead characters love Natchez, they know the way the town is run and the things that happen in it are far from perfect. As mayor, Penn Cage does what he can, but even he is way out of his league when dealing with the likes of the Double Eagles and their descendants. What starts as trying to get his father off a murder charge soon becomes just the tip of the iceberg.

And it’s horrific to read. But important. Hate crimes, and crimes against those trying to atone for their past, should not be easy to face, should not be swept under the carpet. But in the midst of all this terrible stuff are some real heroes: Albert Norris, whose music shop serves as a secret rendezvous for interracial couples. Henry Sexton, who investigates these cold cases for decades, even though it seriously endangers him and everyone he cares about. And Sleepy Johnston, who could be the key to providing evidence.

Though Penn, Caitlin, and Tom are the lead characters, they are not the real heroes. Not even they are above underhanded tactics to get what they want, and sometimes they are really freaking annoying. But these flaws make them more believable.

And then there’s Katy, whose own father punished her for the supposed “crime” of loving a black boy. The repercussions continue, and this subplot is of particular interest to me because of the sanatorium element. Hopefully this is further explored later.

There are no happy endings here, but with time (over the remainder of the trilogy) maybe a little bit of justice can be served. The problem with reading a book as soon as it’s released is that it makes the wait until the next novel even longer. But in the hands of Greg Iles, the wait will likely be worth it for readers. Looking forward to The Bone Tree in 2015…

Oy. The Devil’s Punchbowl is hard reading, and not just because of its 550-page length. (Seriously, it’s so physically awkward to hold open the book at times.)

Dog-fighting. It’s not mentioned on the cover summary, but this is one of those things you really need to know beforehand. It’s extremely graphic. DO NOT READ CHAPTER 31. I did, and I wish I hadn’t. Just trust me on this. Nothing in that chapter happens plot-wise that isn’t summarised later, so it’s okay to skip.

The novel ends on a cliff-hanger, which I’ve heard is resolved in an e-novella, The Death Factory. Which is annoying, because I still haven’t found a DRM-free, non-geo-restricted, PayPal-welcome online bookstore that sells it. Grr…

Ill Wind – Rachel Caine “…fresh ideas no one else seems to be writing about…melding physics with metaphysics to create the ultimate urban fantasy read.” Buy

Countdown – Michelle Maddox “…that very rare kind of book: a thriller that is genuinely thrilling. This is action-packed, non-stop adventure, combining the physiological, psychological and technological in a story that grabbed me immediately and didn’t let go.” Buy

Third Degree – Greg Iles “Greg Iles is a fantastic thriller writer, with complex characterisations, interesting information, and thought-provoking scenarios…An engrossing read set in the timeframe of just one day, Third Degree should not disappointment fans, and will hopefully bring in new readers.” Buy

Sliver of Truth – Lisa Unger: The author’s Beautiful Lies was an interesting novel of a life built on lies. However, this companion novel takes things too far. The FBI, CIA, going from America to the UK, involving the Albanian mafia…it just seemed over the top, and thus didn’t engage me as a reader.

Bound to Love Her – Esri Rose “…social commentary involving the environment and real estate…this novel has something to say – which a lot of stories don’t…Fans of Tate Hallaway’s novels should enjoy this.” Buy

Midnight Brunch at Casa Dracula – Marta Acosta “Mil is sparky, with a sense of adventure, humour and – most importantly – an affable personality…the Casa Dracula series is more than just another vampire tale…plenty of social commentary, with a smart but not toffy intelligence.” Buy

Oh My Goth – Gena Showalter “…interesting enough to read it in basically one sitting.” Buy

Blacklisted – Gena Showalter “For fabulous world-building, how power corrupts, and thoughtful issues, look no further than Blacklisted for a novel with surprising depth.” Buy

You can still check lists of stuff published in June or will be published in July. And if you want to look further into the future, see my Reading Wishlist.

Thanks for voting in my poll, and keep ’em coming.

Note to the publishers: On my copy (UK edition), the back cover says the family’s surname is Fields. It’s not – it’s Shields. Please fix this for future reprints. Thank you.

Greg Iles is a fantastic thriller writer, with complex characterisations, interesting information, and thought-provoking scenarios. Third Degree is no different, and the Mississippi portrayed is one that perpetuates a common Southern stereotype: gun-totin’, trigger-happy citizens. Indeed, it’s the kind of America that we’d like to pretend doesn’t exist.

Dr Warren Shields is usually a cool, calm fellow, popular in the community for not only being a top bloke but an ace doctor too. So it surprises everyone when he completely wigs out, taking his family hostage in a quest for answers that no one can really explain. His wife, Laurel, is desperate to hide the identity of her lover, and lies to Warren again and again. But Warren has secrets of his own, and when they’re revealed have the power to change this entire scenario – and not necessarily for the better.

An engrossing read set in the timeframe of just one day, Third Degree should not disappointment fans, and will hopefully bring in new readers. Greg Iles is one of my favourite authors, and definitely one of the best thriller writers going around.

I only went the library to collect my CD reservation, and unexpectedly came home with 9 books as well. 4 of them are due back in 2 weeks.