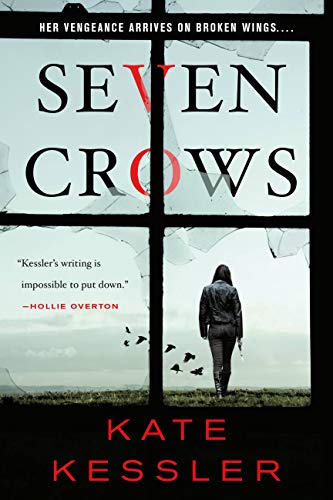 Motorcycle clubs (if that’s all they are) are fine. “Bikie gangs”, however, are not for me. I hate seeing them romanticised, but thought I’d have better luck with this thriller.

It’s tricky. Because while a lot of it shows bikie gangs in all their horror, a fair portion of the novel does romanticise. Which is annoying, because there’s so much potential in the Seven Crows universe to truly shake up bikie fiction.

There are plenty of strong female characters…though they still choose to inhabit the very patriarchal society of bikie life. But imagine if all the women banded together and decided to ditch the dudes. Have an all-female club. Even make it an all-female gang, if need be…

I forget how Killian Delaney got involved with the Crows. Before or after she hooked up with Jason? Anyway, he’s dead. (Not really a spoiler.) But backstories aren’t shared unless they’re relevant to the plot…

She thought Jason was her “true love”. WRONG. But that’s OK, because there was another guy who loved her all along, and still loves her now, and now she loves him…

This is what I meant about the romanticisation. If you ask any bikie, they’d claim their club is the good one; that they only do bad stuff in revenge for other gangs’ bad stuff. And that’s the narrative the author pushes about the Crows. Killian’s new love has been “going legit”, because he’s not like other bikie members, or whatever.

And it’s just so boring and patriarchal. There’s so much set-up for revolution. While incarcerated in a women’s prison, Killian was in a sexual relationship with another inmate. So she’s bi, right? That would be so refreshing for a female to be bisexual in the patriarchy. However, Killian may have only been (and I hate to type this actual phrase that was in the book) “gay for the stay”.

That’s not the author talking. I’m pretty sure it’s the character and the bikie culture. It would’ve been brilliant if Killian’s new love was also female, to truly challenge bikie patriarchy.

Seven Crows is Book 1 in a series. Book 2, Call of Vultures, is due out later in 2020. I don’t know if more are contracted. And because this is only the first taste, perhaps later installments move more to destroy the patriarchy instead of enabling it. It’s just so frustrating to see so much potential go not-pursued in favour of less revolutionary threads.

Seven Crows is challenging. And because it has so much possibility the series will be all the more disappointing if it doesn’t reach its full capability.

This entry was posted in Book Reviews, Kate Kessler and tagged Seven Crows. Bookmark the permalink.