This post is part of the official blog tour for Lucienne Diver’s Faultlines. Below you will find the author’s links, information about her book, and her guest post.

At its heart, Faultlines is a novel about a girl, Vanessa Raines, trying to come to terms with her best friend’s suicide and realizing in the process how much else she has yet to face – like her father’s abandonment, like the no-ripples approach she’s taken to her own life.

There’s a lot more going on as well. As Vanessa decides to take action, to make some noise when she’s previously been the quiet one, she enters dangerous territory. The secret of what led up to Lisa’s suicide is something at least one person wants to keep hidden. Someone else, calling him or herself “Poetic Justice” starts taking revenge against the people perceived to have driven Lisa to her death. Because Vanessa was Lisa’s BFF, everyone assumes it’s her and retaliation begins. As the strikes and counter-strikes mount, so does the danger, until someone is very likely to end up dead.

Faultlines is about so many things to me. That “no-ripple approach” – it pains me that women and minorities are so often taught to take that route for their own safety. Don’t stand out, don’t speak up, don’t draw attention and you won’t draw fire. As though it’s our responsibility to make sure that no one hurts us. As though being bold or simply just noticed is some kind of invitation to attack. It’s terrible and it’s wrong. It’s so wrong.

When Lisa was alive, she was the bold one, the driver of the boat. Vanessa was like a water-skier, hanging onto her rope and riding in her wake, until she lets go and Lisa takes off without her. After Lisa’s death, there’s a huge void in Vanessa’s life – not just friend-sized, but life-sized. And that’s another point I wanted to touch on – sometimes people expand to fill a space. If there’s already someone in a group who’s the leader or the effervescent one or the buzz-kill, even, others will take on more available roles. They often won’t try to occupy the same space. Sometimes that’s confining and it chafes, sometimes it’s comforting. For Vanessa, she misses Lisa and the role that Lisa played in her life so much that she steps into it. She thinks, “What would Lisa do?” and she changes her trajectory based on the answer. The role is outside her comfort zone. It’s outside her safety zone, and yet it’s important for her to grow and to find out what she’s capable of. In time, I know Vanessa would have come into her own in some less horrific way, but given the earth-shattering events she faces, she… I started to write “she’s propelled through the process” but that sounds passive, and these are definite decisions she makes. So, Vanessa propels herself through the process at speed, hoping that she can become who she needs to be and find the answers she needs in time to stop another terrible tragedy.

And Lisa’s death is a terrible tragedy. Yes, she made the decision to end her own life, but it came from a place of deep and utter despair, and I want to talk about that too. When I write about speaking up, it’s not just about shouting things to the world at large, it’s also about asking for help when it’s needed and speaking up for yourself. Lisa doesn’t think anyone will understand what she’s going through, but she doesn’t give anyone the chance. From our external point of view, outside of her pain, we can see that she had people – Vanessa, Carter, her mother, maybe even her brother who seems such a lost cause. In fact, sometimes focusing on someone else’s pain alleviates our own. Helping someone is a balm. It’s a high. There’s nothing like it. So I just want to say too that as hopeless as things might ever feel, there are people who care, and if you can’t talk to someone close to you, you can still reach out for help. As a start, I have a page of links here that might help.

To say anything more would be giving the book away, but in the wake of all we’ve seen this past year – of bigotry and misogyny and votes cast out of fear rather than rationality – I wanted to take a minute to advance the pro-ripple approach. No changes was ever effected by staying silent or hoping that someone else will take on the leadership role. We need to be the change we want to see in the world. (Yes, I know this has been said, but it absolutely bears repeating.)

Thanks so much for letting me bend your ears. 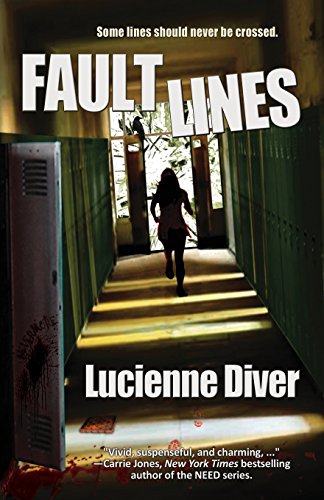 Lucienne Diver
Faultlines
Bella Rosa Books (US: 15th November 2016)
Buy (US Kindle Edition) Buy (US Paperback) Buy (UK) Buy (CA) Buy (Worldwide)
Six months ago Vanessa Raines lost her best friend. Lisa had changed, pushing away everyone close to her, even Vanessa. She had quit soccer. Started wearing dark and dismal clothes. She refused every offer to talk and suffered whatever she was going through in silence. Now she’s really gone. Suicide they claim, but Vanessa knows that isn’t right. It can’t be. Vanessa blames herself for letting Lisa chase her off. She wants answers, so that she can put to rest the rumours surrounding Lisa’s death and so that she can move on, heal. But Lisa left no note and the journal she was always scribbling in – which might tell all – is mysteriously missing. As Vanessa struggles to come to terms with the loss of her friend and to reconstruct the last months of Lisa’s life, someone calling themselves “Poetic Justice” begins taking revenge against those he or she thinks drove Lisa to suicide. Everyone at school believes Vanessa is this mysterious Poetic Justice. It’s easy to blame the former best friend, and Vanessa makes an obvious target. Struggling with her guilt, Vanessa is determined to ignore the threats and allegations aimed her way. But as the Poetic Justice’s vengeance takes a darker turn, retaliation against Vanessa begins to escalate, from cyber bullying to violence, putting both her and the little sister she adores in the line of fire. To protect them both, she has to find out who’s behind the attacks before things turn deadly. And hope she can survive the truth.

This entry was posted in Guest Bloggers, Lucienne Diver and tagged Faultlines. Bookmark the permalink.

6 responses to “[GUEST BLOGGER] Lucienne Diver on Being the Change”