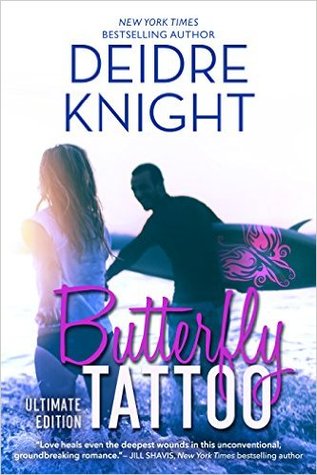 Deidre Knight
Butterfly Tattoo (Ultimate Edition)
TKA Distribution (US: 21st July 2016)
Buy (US) Buy (UK) Buy (CA)
The new and expanded ultimate edition. Includes an exclusive “Dear Reader” letter from Deidre, new reader discussion questions, and some of Deidre’s blogs discussing the writing of the book and its impact on LGBT fiction. You never know where love will find you. Michael Warner had never been with a man before, until the night Alex Richardson turned his world upside down with a single kiss. Together they shared a home, and a daughter, until a drunk driver brought an end to their Happily Ever After. A year later, Michael is still drowning in grief when fate throws him a lifeline in the form of Rebecca O’Neill, a powerhouse producer with a collection of skeletons piled just as high as his own. How could anyone ever love this face? That’s what Rebecca thinks every time she looks in the mirror. Once she was Hollywood’s favourite “It Girl” and every man’s fantasy. Now, a jagged slash serves as a daily reminder of the attack that destroyed her dreams, and nearly took her life. But, when Michael is called to her office to fix a power outage, the sound of the rugged electrician’s voice stirs feelings of desire she thought were lost forever. And, when the lights come up, she sees a pain as familiar as her own behind his haunted brown eyes. With each kiss, Rebecca mends a piece of Michael’s shattered heart. And with each touch, he reminds her of how beautiful she was – and still is. But, no matter how carefully they tiptoe around the landmines of the past, it’s just a matter of time before unfinished business and a bombshell revelation test the limits of their new and fragile love.

This entry was posted in Deidre Knight and tagged Butterfly Tattoo. Bookmark the permalink.