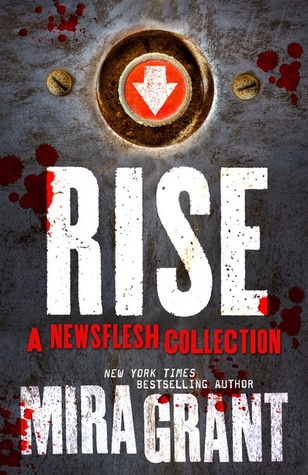 Mira Grant
Rise (Newsflesh, Anthology)
Hachette Orbit (US & UK: 21st June 2016)
Buy (US); Buy (UK); Buy (CA); Buy (Worldwide)
Collected here for the first time is every piece of short fiction from Mira Grant’s Newsflesh series, with two new never-before-published novellas and all eight short works available for the first time in print. A portrait of an America paralysed with fear. No one leaves their houses and entire swaths of the country have been abandoned. And only the brave, the determined, or the very stupid, venture out into the wild… Contents: 1. Countdown; 2. Everglades; 3. San Diego 2014; 4. How Green This Land, How Blue This Sea; 5. The Day the Dead Came to Show and Tell; 6. Please Do Not Taunt the Octopus; 7. All the Pretty Little Horses (Never Before Published); 8. Coming to You Live (Never Before Published).

Paul Tremblay
Disappearance at Devil’s Rock
HarperCollins William Morrow (US & CA: 21st June 2016)
Buy (US); Buy (UK); Buy (CA); Buy (Worldwide)
Late one summer night, Elizabeth Sanderson receives the devastating news that every mother fears: her thirteen-year-old son, Tommy, has vanished without a trace in the woods of a nearby state park. The search isn’t yielding any answers, and Elizabeth and her eleven-year-old daughter, Kate, struggle to comprehend Tommy’s disappearance. Feeling helpless and alone, their sorrow is compounded by anger and frustration. Neither the state nor local police have uncovered any leads. Josh and Luis, the friends who were the last to see Tommy before he vanished, may not be telling the whole truth about that night in Borderland State Park, when they were supposedly hanging out at a landmark they have renamed Devil’s Rock. Living in an all-too-real nightmare, Elizabeth is wholly unprepared for the strange series of events that follow. She believes a wraithlike apparition of Tommy materializes in her bedroom, while Kate and other local residents claim to see a shadowy figure peering through their windows in the dead of night. Then, random pages torn from Tommy’s journals begin to mysteriously appear – entries that reveal an introverted teenager obsessed with the phantasmagoric; the loss of his father, killed in a drunk-driving accident a decade earlier; a folktale involving the devil and the woods of Borderland; the coming zombie “pocketclips”; and a horrific incident that Tommy believed connected them all. As the search grows more desperate, and the implications of what happened become more ominous and sinister, no one is prepared for the shocking truth about that night at Devil’s Rock.

This entry was posted in Mira Grant, Paul Tremblay and tagged Disappearance at Devil's Rock, Rise. Bookmark the permalink.