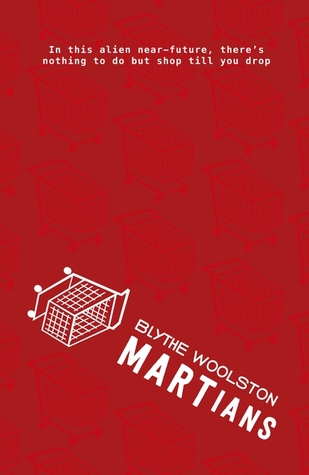 Read it and weep. Blythe Woolston’s MARTians hurts to read because though it’s labelled dystopian/futuristic, it seems scarily contemporary.

Zoë’s mother abandons her, and her school closes down. She finds work in AllMART and shelter in a laundromat. But it’s clear she’s living day by day, and doesn’t really have a future. There’s never a chance to “make money” because she’ll be forever in debt to AllMART.

But perhaps the most devastating moment is the casualness in which it’s possible to purchase a firearm and ammunition from a mega-mart. This may be commonplace to some, but it’s far from normal where I live. Yes, the future is terrifying. But knowing that acquiring weapons can be so easy for some RIGHT NOW in real life? That’s even worse, and the incident in the novel is chilling enough.

But throughout this terribly bleak AllMART existence is a thread of hope: Always look for the ones who need help. Zoë’s one of the lucky people, and now it’s on her to spread help around. While the book’s ending may seem inconclusive, I get the feeling that as long as she has friends she’ll be OK.

This entry was posted in Blythe Woolston, Book Reviews and tagged MARTians. Bookmark the permalink.