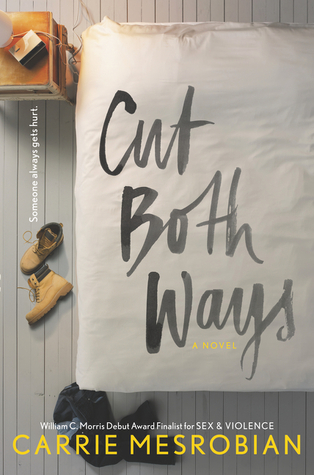 SPOILER WARNING: This “review” is nothing but spoilers. They’re behind a cut on Goodreads, but out in the open elsewhere.

If you’re looking for closure, you won’t find it here. The story kind of trails off, and might bother some readers. It works fine for me, though, because we’re left with enough clues that Will’s future isn’t that bleak. He has a job he loves, and his boss’s home has been a safe haven for Will, so he’ll have somewhere to live if things don’t improve with his parents.

I didn’t expect to connect with Will’s alcoholic dad, yet here we are. Yeah, he’s a screw-up, and he knows it. But he finally achieves his goal, and he’s ready to present it to Will and everyone else who didn’t think he could do it. Only it literally goes up in flames before he can show everyone. (Luckily, Will sneaks in before the fire to see the result of his dad’s work, which makes him respect his dad, so they should have a better relationship now.)

I can’t remember which photos Will’s stepdad saw. Were they dic-pics, in-bed pics, or kissing pics? If they were dic-pics… Well, I don’t envy anyone having to explain dic-pics to their young daughters. (I forget the twins’ age – anywhere from six to nine, maybe.)

Brandy is hard done by. Angus knows about Will and Brandy being together, but Brandy doesn’t know about Will and Angus together. And this is frustrating because Will and Brandy have unprotected sex (despite having the “unprotected sex leads to pregnancy” talk TWICE), and a pregnancy scare ensues. Since they were unprotected, Brandy should’ve had the right to know who else has had their hands/mouth on Will. No STIs in the story, though – not even a mention of “what if”.

Will could’ve brought up at any time that he was hooking up with Angus. No need to ask Brandy’s permission, but simply let her know what’s going on so she could make an informed decision about whether to stick with him or not. She’s not given that chance.

My biggest problem with the book is revealed in the Author’s Note. She explains that Cut Both Ways is an example of bisexual erasure. Erasure’s a harmful thing. It’s one thing to be ignorant, but it’s another thing entirely to go along with something even though you know it’s wrong. So I wouldn’t call this book a positive representative of bisexuality, considering the erasure. And it’s really disappointing, because it may have helped Will to know that being attracted to both girls and guys (even just one guy) is normal, and that he’s not alone.

This entry was posted in Book Reviews, Carrie Mesrobian and tagged Cut Both Ways. Bookmark the permalink.