Jenna Black
Resistance (Replica, Book 2)
Macmillan Tor (US: 11th March 2014; AU: 1st September 2014)
Review
Buy (US Kindle Edition) Buy (US Paperback) Buy (UK Kindle Edition) Buy (UK Paperback) Buy (CA Kindle Edition) Buy (CA Paperback) Buy (Worldwide)
Nate Hayes is a Replica. The real Nate was viciously murdered, but thanks to Paxco’s groundbreaking human replication technology, a duplicate was created that holds all of the personality and the memories of the original. Or…almost all. Nate’s backup didn’t extend to the days preceding his murder, leaving him searching for answers about who would kill him, and why. Now, after weeks spent attempting to solve his own murder with the help of his best friend and betrothed, Nadia Lake, Nate has found the answers he was seeking…and he doesn’t like what he’s discovered. The original Nate was killed because he knew a secret that could change everything. Thanks to Nadia’s quick thinking, the two of them hold the cards now – or think they do. Unfortunately, neither of them fully understands just how deep the conspiracy runs.

Cassandra Rose Clarke
The Mad Scientist’s Daughter
Angry Robot (US & CA: 29th January 2013; UK: 7th February 2013)
Review
Buy (US) Buy (UK) Buy (CA Kindle Edition) Buy (CA Paperback) Buy (Worldwide)
He looks and acts human, though he has no desire to be. He was programmed to assist his owners, and performs his duties to perfection. A billion-dollar construct, his primary task now is to tutor Cat. As she grows into a beautiful young woman, Finn is her guardian, her constant companion…and more. But when the government grants rights to the ever-increasing robot population, however, Finn struggles to find his place in the world.

Megan Abbott
The End of Everything
Hachette Little, Brown Reagan Arthur/Back Bay (US: 3rd July 2012); Pan Macmillan Picador (UK: 18th June 2015; AU: 8th September 2015)
Buy (US) Buy (UK Kindle Edition) Buy (UK Paperback) Buy (CA Kindle Edition) Buy (CA Hardcover) Buy (CA Paperback) Buy (Worldwide)
Thirteen-year-old Lizzie Hood and her next door neighbor Evie Verver are inseparable. They are best friends who swap bathing suits and field-hockey sticks, and share everything that’s happened to them. Together they live in the shadow of Evie’s glamorous older sister Dusty, who provides a window on the exotic, intoxicating possibilities of their own teenage horizons. To Lizzie, the Verver household, presided over by Evie’s big-hearted father, is the world’s most perfect place. And then, one afternoon, Evie disappears. The only clue: a maroon sedan Lizzie spotted driving past the two girls earlier in the day. As a rabid, giddy panic spreads through the Midwestern suburban community, everyone looks to Lizzie for answers. Was Evie unhappy, troubled, upset? Had she mentioned being followed? Would she have gotten into the car of a stranger? Lizzie takes up her own furtive pursuit of the truth, prowling nights through backyards, peering through windows, pushing herself to the dark center of Evie’s world. Haunted by dreams of her lost friend and titillated by her own new power at the center of the disappearance, Lizzie uncovers secrets and lies that make her wonder if she knew her best friend at all.

Robert C. O’Brien
Z for Zachariah
Penguin Puffin (UK: 26th February 1998; AU: 11th March 1998); Simon & Schuster Pulse (US & CA: 18th August 2015)
Review
Buy (US) Buy (UK Hardcover) Buy (UK Paperback) Buy (CA) Buy (Worldwide Hardcover) Buy (Worldwide Paperback)
Ann Burden is completely alone. The world as she once knew it is gone, ravaged by a nuclear war that has taken everyone from her. For the past year, she has lived in a remote valley with no evidence of any other survivors. But the smoke from a distant campfire shatters Ann’s solitude. Someone else is still alive and making his way toward the valley. Who is this man? What does he want? Can he be trusted? Both excited and terrified, Ann soon realizes there may be worse things than being the last person on Earth. 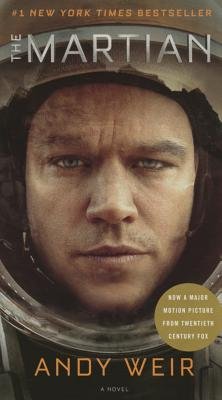 Andy Weir
The Martian
Random House (US & CA: 18th August 2015; UK: 27th August 2015; AU: 16th September 2015)
Review
Buy (US Hardcover) Buy (US Paperback) Buy (UK Kindle Edition) Buy (UK Paperback) Buy (CA Kindle Edition) Buy (CA Hardcover) Buy (CA Paperback) Buy (Worldwide Hardcover) Buy (Worldwide Paperback)
Six days ago, astronaut Mark Watney became one of the first people to walk on Mars. Now, he’s sure he’ll be the first person to die there. After a dust storm nearly kills him and forces his crew to evacuate while thinking him dead, Mark finds himself stranded and completely alone with no way to even signal Earth that he’s alive – and even if he could get word out, his supplies would be gone long before a rescue could arrive. Chances are, though, he won’t have time to starve to death. The damaged machinery, unforgiving environment, or plain-old “human error” are much more likely to kill him first. But Mark isn’t ready to give up yet. Drawing on his ingenuity, his engineering skills – and a relentless, dogged refusal to quit – he steadfastly confronts one seemingly insurmountable obstacle after the next. Will his resourcefulness be enough to overcome the impossible odds against him?

Jennifer Lynn Barnes
The Fixer (The Fixer, Book 1)
Bloomsbury (US: 7th July 2015)
Review
Buy (US Hardcover) Buy (US Paperback) Buy (UK Hardcover) Buy (UK Paperback) Buy (CA Kindle Edition) Buy (CA Hardcover) Buy (Worldwide Hardcover) Buy (Worldwide Paperback)
When sixteen-year-old Tess Kendrick is sent to stay with her older sister, she has no idea that the famed Ivy Kendrick is the capital’s number one “fixer.” For powerful people looking to make a scandal disappear, Tess’s sister is there to help…for a price. And no sooner does Tess enroll the prestigious Hardwicke School than she unwittingly finds herself following in Ivy’s footsteps. Tess never thought she and Ivy had much in common, but when her new friends at school need help, she discovers that her talents quickly make her Hardwicke’s go-to high-school fixer. Secrets pile up as each sister lives a double life – until their worlds come crashing together in a conspiracy that reaches from the halls of Hardwicke to Capitol Hill. Suddenly, there is much more on the line than good grades, money, or politics. The odds are stacked against Tess, and the price for this fix might be more than she can pay.