[GUEST BLOGGER] Jennifer Longo on Researching a Story on Ice

This post is part of the official blog tour for Jennifer Longo’s Up to This Pointe. Below, you’ll find the author’s guest post, her links, and information about her book.

Researching a Story on Ice

Up to This Pointe began as a full-length play, part of my MFA thesis for playwriting. I was originally writing a play about photography, and in my research on the history of the Kodak Company I came upon the Frank Hurley photographs from Ernest Shackleton’s 1914-1916 Endurance expedition. In a single afternoon I became obsessed with the Age of Exploration, with Antarctica, with Shackleton and Scott and Amundsen. The play became one about Antarctica’s singular unique beauty and ecosystem, its barometric measure of how humans must continually adapt to life on earth even as they influence it, but most of all (and forgive my getting esoteric and woo-woo here) as a dynamic, living metaphor for human existence in the universe.

Seriously. That sounds ridiculous, but the entire concept of these guys, the explorers seeking to ‘conquer’ a continent? (Which really was them ‘conquering’ an idea, conquering Man’s own frailty, yadda yadda.) And attempting to do this by outsmarting ice? Fascinating.

This fascination is obviously nothing unique to me, it’s the same one all writers, all artists share; we pretty much exclusively examine the human condition. But oh, Antarctica. For me, there is not a more brutal, simultaneously metaphorical and literal microcosm of what is it to be a person or animal alive on Earth. Because it is survival, and it is fragility and strength and death and endurance and hope and despair and human invention and invasion and birth and destruction and healing, fire and ice and sun and dark, fear and wonder and most of all, it is impossible, indescribable beauty.

And booze. And bowling.

The reading I did for the play was done before the advent of the current state of the internet, but remains the best I’ve found and re-examined for Up to This Pointe. Which isn’t to say it’s a book chock-full of facts about The Ice or the explorers. Research for fiction means months of reading to inform the narrative and it gets distilled to what feels more like flavour – most people aren’t interested in taking a textbook to the beach – but the story can’t happen without research. Today there are also some amazing documentaries and blogs about life on The Ice. So here’re some of my favourites, all really engaging reads/viewings for anyone wanting, not unlike some good cowbell, more Antarctica:

The Worst Journey in the World: With Scott in Antarctica 1910-1913 by Apsler Chery-Garrard
South: The Endurance Expedition by Ernest Shackleton
An Empire of Ice: Scott, Shackelton, and the Heroic Age of Antarctic Science by Edward J. Larson
Big Dead Place: Inside the Strange and Menacing World of Antarctica by Nicholas Johnson (A companion book to the archived blog of the same name)
Encounters at the End of the World Documentary film by Werner Herzog
Antarctica: A Year on Ice Documentary film by Anthony Powell, Christine Powell and Simon Price 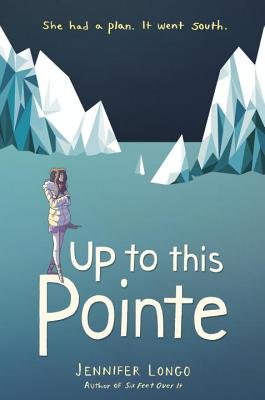 Jennifer Longo
Up to This Pointe
Random House (US & CA: 19th January 2016; AU: 15th February 2016)
Buy (US Kindle Edition) Buy (US Hardcover) Buy (UK Kindle Edition) Buy (UK Hardcover) Buy (CA Kindle Edition) Buy (CA Hardcover) Buy (Worldwide)
Harper is a dancer. She and her best friend, Kate, have one goal: becoming professional ballerinas. And Harper won’t let anything – or anyone – get in the way of The Plan, not even the boy she and Kate are both drawn to. Harper is a Scott. She’s related to Robert Falcon Scott, the explorer who died racing Amundsen and Shackleton to the South Pole. So when Harper’s life takes an unexpected turn, she finagles (read: lies) her way to the icy dark of McMurdo Station…in Antarctica. Extreme, but somehow fitting – apparently she has always been in the dark, dancing on ice this whole time. And no one warned her. Not her family, not her best friend, not even the boy who has somehow found a way into her heart. It will take a visit from Shackleton’s ghost – the explorer who didn’t make it to the South Pole, but who got all of his men out alive – to teach Harper that success isn’t always what’s important; sometimes it’s more important to learn how to fail successfully.

This entry was posted in Guest Bloggers, Jennifer Longo and tagged Up to This Pointe. Bookmark the permalink.