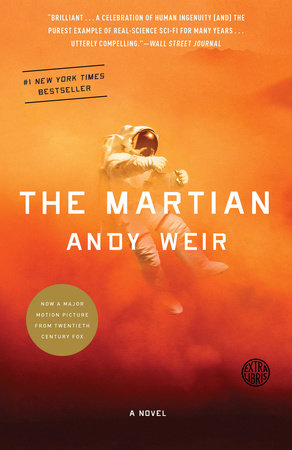 Believe the hype. This. Is. AWESOME.

Upon hearing that the lead character is “funny”, I was concerned. Hello, grave danger? Could die anytime? Mark Watney could’ve been very annoying. But he’s not – his sense of humour plays a big part of keeping him alive.

Imagine how different, and shorter, this novel could’ve been if Mark had depression, PTSD, or anxiety. You hear about a fight-or-flight response, but I reckon there’s a third response: freeze. When you can’t decide to fight or flee, because you can’t think at ALL. You FREEZE.

Considering his situation (being alone on Mars with supplies dwindling), Mark’s mental health is astonishingly good, so he’s able to think on his feet, which saves his life on several occasions.

Pretty much the entire book contains a bombardment of obstacles, which Mark (and the rest of the Ares 3 crew in space, and the staff on Earth) must overcome – and quickly. Not every plan works, but it’s amazing what can happen when everyone works together to save one guy.

(And then you get down when you think of real life, and how people die every day, and Earth’s people can’t all get their act together to help…)

Some have complained of “too much science” in the novel, but I very much appreciate every bit of it. Can I remember and relay any of it? No, but its inclusion means everything to me, because it proves how hard Andy Weir worked to make his story as plausible as possible. Would his plot points work in real life? I have no idea, but I was never pulled out of the story to think, “That wouldn’t work. Bad science! Go sit in the corner.” I read a lot of speculative fiction, and the stories that don’t work for me involve magic, wherein the character wishes something, says something, and then what they want to happen does. I can never truly get behind those stories, but The Martian? Hell yes!

From the affable characters, to the stunning ingenuity, the deadly location, and fascinating space scenes, The Martian excels on all accounts. But the real winner is the mind-blowing research Andy Weir undertook and used to make his story the best it can be.

(Though imagine the story Johanssen could’ve had if…)

This entry was posted in Andy Weir, Book Reviews and tagged The Martian. Bookmark the permalink.