Life and Death: Stephenie Meyer’s Fan Fiction Based on Her Own Novel, Twilight 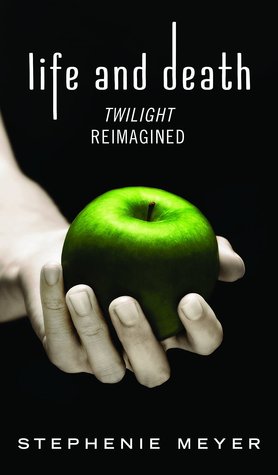 After the commercial success of Fifty Shades of Grey and other pulled-to-publish fan fiction, Stephenie Meyer would be forgiven for never publishing anything again. What would be the point, when other authors would publish fan fiction based on her characters/world, but only change the names and other incriminating details? Indeed, Ms. Meyer has turned to producing films in recent years: Austenland made it to the big screen, and Fickle Fish Films has optioned film rights for Lois Duncan’s Down a Dark Hall, Mindy McGinnis’s Not a Drop to Drink, and maybe more.

With the announcement of the tenth anniversary edition of Twilight came the promise of “bonus material”. I expected short stories starring side characters, or scenes with the point of view switched to Edward’s (like in Midnight Sun). But Nicole Sperling’s article for EW surprised with the news of Life and Death: Twilight Reimagined, a 442-page retelling of Ms. Meyer’s debut…with the two lead characters’ genders swapped.

Will the story seem less predatory with human boy Beau and immortal woman Edythe? Reportedly, Beau doesn’t have “the chip Bella carries around on her shoulder all the time”, so it could be like another story altogether. Other than gender, how else will Beau differ from Bella, and Edythe from Edward? Hopefully Life and Death will inspire critiques and think-pieces discussing the changes between the two novels, and why gender-swapping may provide a new view on the basic story itself. Will the gender-swap alter the basic character archetypes in other ways?

Usually I’d suspect that something like this is just a shameless cash-grab, but I’m surprised at how much I’m looking forward to reading Life and Death. Okay, I’m really just anticipating the commentary by trusted fellow readers.

Of course, my cynical part now expects copycat-authors to follow suit with stories of…Christina Grey and Andre Steele, for example. But those P2P fan fiction writers have given me more respect for Stephenie Meyer, and the grace with which she lives. Most importantly, I hope Ms. Meyer hasn’t given up on writing new fiction, with new characters in new worlds. I may have found the Twilight Saga books to be 3 stars each, but I’m sincerely intrigued with the concept of Life and Death.

NOTE: At the moment, Life and Death is exclusive to Twilight: Tenth Anniversary Edition. No word yet on if it’ll be sold separately.

This entry was posted in Stephenie Meyer and tagged Life and Death, Twilight. Bookmark the permalink.