Trying out a new blog feature. I already have regular posts for new pre-order links and cover art, but often other stuff catches my eye, too. So here’s the weekly news, and information on the books featured:

Viola Carr‘s second Electric Empire novel will be The Devious Dr. Jekyll (previously titled Tenfold More Wicked). Due out 27th October 2015 in the US & Canada (3rd December 2015 in the UK). Source

Karen E. Taylor‘s Twelve Steps from Darkness (previously published by Juno Books) has been edited, expanded upon, and self re-published as Cellar. Source

Viola Carr
The Devious Dr. Jekyll (Electric Empire, Book 2)
HarperCollins Voyager (US & CA: 27th October 2015; UK: 3rd December 2015)
Buy (US) Buy (UK) Buy (CA) Buy (Worldwide)
Since solving the infamous Chopper case, Dr. Eliza Jekyll is struggling to keep her career as a crime scene physician on track. She can’t figure out if Remy Lafayette – mercurial Royal Society agent and wolf man – wants to marry her, eat her or burn her at the stake, while Lizzie, her jealous shadow self, wants to steal Remy and usurp Eliza’s life. But Remy tempts her with the one thing she can’t resist: a bizarre crime. Now, her fragile career – and their lives – depend on catching a bloodthirsty ritual torturer dubbed the Pentacle Killer. The case proves more bewildering and terrifying than any, drawing her into a hidden world of spies, art thieves and evil alchemy, where the price of immortality is madness…or damnation. Eliza needs Lizzie’s dark ingenuity to survive, but Lizzie’s treachery in love and war knows no limits. When the killer’s shocking purpose is finally revealed, Eliza and Remy race to thwart a foul conspiracy to cripple the Empire’s fragile war effort against the sorcerous French. Before a vengeful Lizzie finally gets rid of Eliza for good…

Nicci French
Friday on My Mind (Frieda Klein, Book 5)
Penguin Michael Joseph (AU: 24th June 2015; UK: 2nd July 2015)
Buy (UK) Buy (Worldwide)
When a bloated corpse is found floating in the River Thames the police can at least sure that identifying the victim will be straightforward. Around the dead man’s wrist is a hospital band. On it are the words Dr F. Klein… But psychotherapist Frieda Klein is very much alive. And, after evidence linking her to the murder is discovered, she becomes the prime suspect. Unable to convince the police of her innocence, Frieda is forced to make a bold decision in order to piece together the terrible truth before it’s too late either for her or for those she loves. 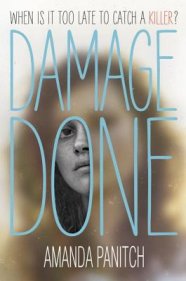 Amanda Panitch
Damage Done
Random House (US & CA: 21st July 2015; AU: 3rd August 2015)
Buy (US) Buy (UK) Buy (CA) Buy (Worldwide)
22 minutes separate Julia Vann’s before and after. Before: Julia had a twin brother, a boyfriend, and a best friend. After: She has a new identity, a new hometown, and memories of those twenty-two minutes that refuse to come into focus. At least, that’s what she tells the police. Now that she’s Lucy Black, her fresh start has attracted the attention of one of the hottest guys in school. And someone much more dangerous. She thought her brother’s crimes were behind her. But now she’s being forced to confront the dark secrets she thought were safely left behind. How far will Julia go to keep her slate clean? One thing is clear: The damage done can never be erased. It’s only just beginning…

Karen E. Taylor
Cellar
Karen E. Taylor (US: 1st April 2015)
Buy (US) Buy (UK) Buy (CA)
Something’s not quite right about the neighborhood of Woodland Heights. Five years ago six children disappeared in this suburban heaven. When Laura Wagner moves into a house that had been vacant for most of those five years, this something comes alive. Laura Wagner, divorced mother of two, addicted to alcohol and Valium, sees nothing wrong with her life; she sees nothing much at all. She gets by as well as she can, aided by the solace of her drugs and whiskey, until the day she backs into a police car in the parking lot of her favorite bar and is sentenced to involuntary rehabilitation treatments. Returning home clean and sober is an eye-opening experience. The spirit dwelling in her house reveals its true, evil nature and begins to prey upon her, her friends, even her children, avid to spread its message of death and despair. Laura must learn to control her inner demons before she can subdue these outside forces threatening to break free. She must learn how to distinguish hallucinations from reality, learn how to stop the spirit that requires her death and the deaths of her loved ones.