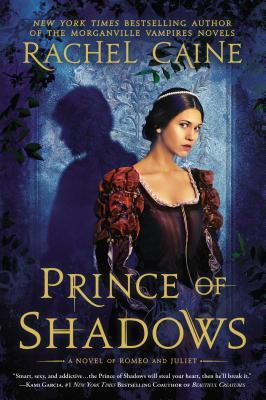 Rachel Caine
Prince of Shadows
Penguin NAL (US & CA: 3rd February 2015)
Buy (US) Buy (UK) Buy (CA) Buy (Worldwide)
In the Houses of Montague and Capulet, there is only one goal: power. The boys are born to fight and die for honour and – if they survive – marry for influence and money, not love. The girls are assets, to be spent wisely. Their wishes are of no import. Their fates are written on the day they are born. Benvolio Montague, cousin to Romeo, knows all this. He expects to die for his cousin, for his house, but a spark of rebellion still lives inside him. At night, he is the Prince of Shadows, the greatest thief in Verona – and he risks all as he steals from House Capulet. In doing so, he sets eyes on convent-bound Rosaline, and a terrible curse begins that will claim the lives of many in Verona…and will rewrite all their fates, forever.

Melissa Landers
Invaded (Alienated, Book 2)
Disney-Hyperion (US: 3rd February 2015)
Buy (US) Buy (UK) Buy (CA) Buy (Worldwide)
Cara always knew life on planet L’eihr would be an adjustment. With Aelyx, her L’eihr boyfriend, back on Earth, working to mend the broken alliance between their two planets, Cara is left to fend for herself at a new school, surrounded by hostile alien clones. Even the weird dorm pet hates her. Things look up when Cara is appointed as human representative to a panel preparing for a human colony on L’eihr. A society melding their two cultures is a place where Cara and Aelyx could one day make a life together. But with L’eihr leaders balking at granting even the most basic freedoms, Cara begins to wonder if she could ever be happy on this planet, even with Aelyx by her side. Meanwhile, on Earth, Aelyx, finds himself thrown into a full-scale PR campaign to improve human-L’eihr relations. Humans don’t know that their very survival depends on this alliance: only Aelyx’s people have the technology to fix the deadly contamination in the global water supply that human governments are hiding. Yet despite their upper hand, the leaders of his world suddenly seem desperate to get humans on their side, and hardly bat an eye at extremists’ multiple attempts on Aelyx’s life. The Way clearly needs humans’ help…but with what? And what will they ask for in return?

This entry was posted in Melissa Landers, Rachel Caine and tagged Invaded, Prince of Shadows. Bookmark the permalink.