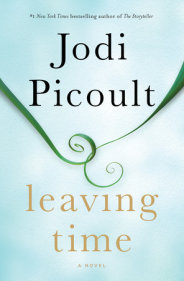 At Melbourne Zoo in December 2013, elephant Num-Oi’s calf died in a tragic accident overnight. Details of the herd’s mourning weren’t shared with the public, but a week later another elephant mother gave birth. Whilst no child can replace another, the new arrival may have partially eased some of the group’s grief, or at least provided a new distraction.

In October 2014, it was announced that Num-Oi had undergone artificial insemination in August, as “her behaviour indicated…that she would benefit from being pregnant again sooner, rather than later.”

The latter news came during the week I began Jodi Picoult’s Leaving Time. A major character is a scientist with a focus on grief in elephants, so the publication’s timing is ideal. It’s not surprising that the pachyderms stand out as my favourite parts of the novel – Maura’s story in particular really got to me, but every elephant scene is riveting.

Mind you, it’s not as if the human characters are boring, but they just didn’t appeal to me as much. When children are main, point-of-view characters in adult fiction they often don’t seem realistic, as though they’re too precocious to be fully relatable. Such is the case with Jenna Metcalf, who hires a psychic and a private investigator to find her mother who disappeared ten years ago.

Serenity Jones made me Fry-face on page 139 (Australian edition): “In fact, some of the best mediums I’ve ever met are gay, and I think it’s because they have that balance of masculine and feminine in them.” Uh, what? Gay men are not necessarily more “feminine” than straight men. That the old stereotype is hanging around even now means that society still has a long way to go when it comes to shedding prejudices.

And Alice Metcalf made me Fry-face on page 212 (Australian edition): “It made me think about the gross generalizations we made about humans from those two cultures, and how the elephants followed suit: In Asia you were more likely to find someone averting his eyes to be polite. In Africa, the head would be defiantly lifted and the gaze met directly – not to show aggression but because that was acceptable for the culture.”

It’s unsurprising that I prefer the elephants in this book. You would’ve thought these human characters would be above stereotyping cultures, but apparently not.

Science, memory, and elephants combine to tell a story with stunning heartache. Leaving Time is an immersive experience that you’ll want to devour quickly, and then re-read immediately. This is the best novel from Jodi Picoult in years, and that this one stands over so many high-quality reads from her is the hallmark of a brilliant career. I love Leaving Time, simple as that. Now I’m desperate to hear what new topic this amazing author is working on next.

This entry was posted in Book Reviews, Jodi Picoult and tagged Leaving Time. Bookmark the permalink.