Tez Says: This is a stop on Lisa Ann O’Kane’s blog tour for Essence. Below you’ll find Lisa’s links, info on Essence, and the guest post – on plotting Essence (or lack thereof) – is at the end. 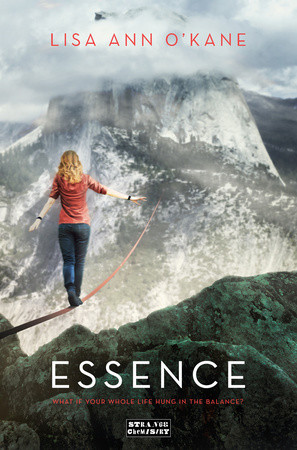 Lisa Ann O’Kane
Essence
Strange Chemistry (US, UK, & CA: 3rd June 2014)
Buy (US) Buy (UK) Buy (CA) Buy (Worldwide)
Growing up in San Francisco’s Centrist Movement, sixteen-year-old Autumn Grace has always believed emotions – adrenaline, endorphins, even happiness – drain your Essence and lead to an early death. But her younger brother’s passing and a run-in with a group of Outsiders casts her faith into question. Ryder Stone, the sexy, rebellious leader of the Outsiders, claims Essence drain is nothing more than a Centrist scare tactic – and he can prove it. Autumn follows Ryder to his Community of adrenaline junkies and free spirits in Yosemite National Park, and they introduce her to a life of adventure, romance, sex, drugs and freedom. But as she discovers dark secrets beneath the Community’s perfect exterior, she realises the more she risks in search of the perfect rush, the further she has to fall.

True confession: I am a little analytical and obsessive-compulsive by nature. I like right angles and even numbers and order and logic, and I can pour over an Excel spreadsheet for hours. I organise my life into colour-coded boxes on a Google calendar, so it’s only logical I would consider myself a “plotter” as a writer, right?

I thought I was a plotter. I wrote my entire first novel under the guise of being a plotter. I bought every how-to book on the market, and I planned out every single twist and turn in a series of Word and Excel files that were almost as long as my story itself.

I loved that story, but it wasn’t destined to see the light of day, so I shelved it and dove into my second novel, Essence during the winter of 2011. The inspiration for Essence struck me much more suddenly, and the pages flew from my fingertips without too much effort or forethought at first. The story felt different, too. It felt alive, and I couldn’t see the ending or the arcs as clearly as I had the first time.

Another funny thing. Every time I tried to wrestle the story or make it fall in line, it died on me. One character in particular was so obstinate about my plans that I finally found myself thinking, “Okay, fine. YOU wanna tell the story? Knock yourself out!”

I cannot express how frustrating and uncomfortable this entire process of letting go was for me. First of all, I felt like a crazy person for having legit conversations with a person I invented. Secondly, I never felt more powerless than I did the moment I relinquished control to a force I didn’t fully understand.

Some part of my subconscious must have known how Essence was going to end, but I honestly didn’t figure it out until about fifty pages from the climax. In the meantime, I felt more like I was channelling a story than writing it, and I experienced so many moments of surprise that I often felt more like a reader than a writer.

(There is one scene in particular where one of my favorite characters does something way out of his comfort zone. After I wrote it, I found myself telling my friends, “I didn’t even know he was capable of that!” Their confused, slightly alarmed faces will stick with me forever.)

The strangest part: Essence made sense to me. And when it finally wrapped, I realised there was no other way it could have possibly ended.

So what does this make me? An analytical, obsessive-compulsive person who talks to imaginary people? Or maybe just a pantser disguised in a plotter’s clothing?

Regardless, it was fun to realise it’s okay to let go sometimes. You will never find out what you are capable of if you are always holding yourself back.

This entry was posted in Guest Bloggers, Lisa Ann O'Kane and tagged Essence. Bookmark the permalink.